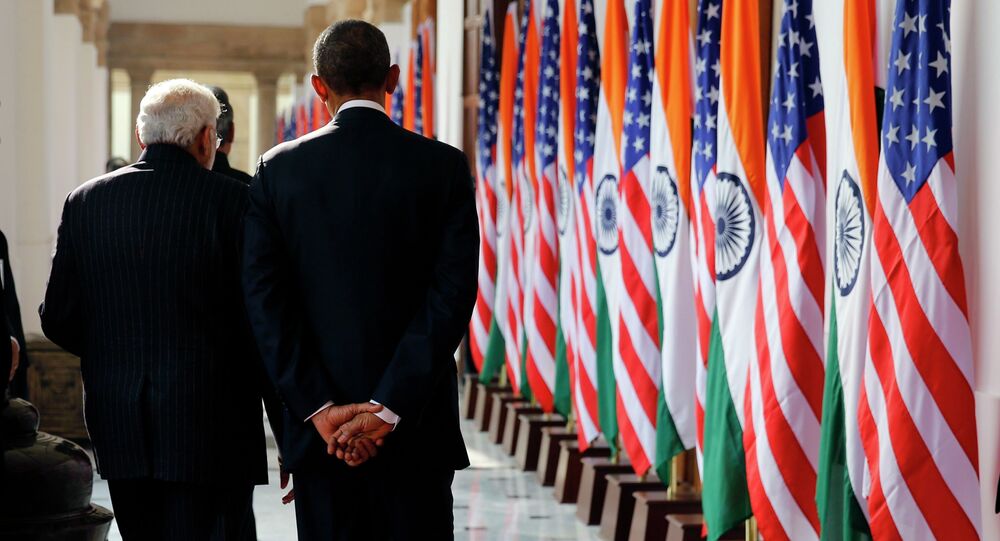 US President Barack Obama arrived in India on Sunday to take part in the Indian Republic Day celebrations and enhance strategic cooperation between the two countries.

© REUTERS / Kevin Lamarque
US Cautions Pakistan Against Border Incidents With India During Obama Visit
MOSCOW, January 25 (Sputnik) – The United States and India established diplomatic relations on November 1, 1946, when the US diplomatic mission in New Delhi was transformed into an embassy, which was prior to the official proclamation of India's independence from the British Empire.

The United States recognized the independence of India on August 15, 1947.

During the first decades of its existence as an independent state, India pursued a policy of non-alignment, so that the country would not get involved in blocs led by the United States or the Soviet Union, which ran counter to US interests. Following the collapse of the Soviet Union and the bipolar system of international relations, India began reassessing its relations with the United States.

The process of rapprochement between the two countries lasted about a decade. The first tangible progress in Indo-American relations took place during the visit of US President Bill Clinton to India in March 2000. The policy of deep cooperation with India has been conducted particularly vigorously by President George W. Bush's administration since 2002.

A shift in Washington's stance on India's nuclear status in 2001 was a major step toward rapprochement between the two countries: for the first time ever, the United States declared its readiness to recognize India as a nuclear power.

In July 2005, India's Prime Minister Manmohan Singh and US President George W. Bush signed an agreement on nuclear energy cooperation in Washington. The ties between the two nations improved significantly after President Bush visited India in March 2006, and the sides signed a nuclear cooperation agreement, as well as several other deals, particularly in space exploration.

Prime Minister Manmohan Singh's visit to the United States in November 2009 was the next important step in the development of strategic cooperation between the two countries.

In June 2010, US Secretary of State Hillary Clinton and Indian Foreign Minister Somanahalli Mallaiah Krishna held the first US-Indian strategic dialogue at the level of foreign ministers in Washington.

On July 23, 2013, US Vice President Joe Biden met with his Indian counterpart Hamid Ansari as part of his four-day visit to India. The parties discussed economic cooperation, energy and climate change, as well as expanding defense ties between the two countries.

The fifth round of the India-US strategic dialogue took place in July 2014. The talks between the two countries took place in New Delhi.

On September 26-30, 2014, India's Prime Minister Narendra Modi visited the United States for the first time since assuming office in May 2014.

During the visit, Modi and President Obama discussed bilateral trade, climate change and cooperation in combating the Islamic State terrorist group. The meeting was held behind closed doors.

The United States is one of India's largest trade and investment partners. The trade between the two countries grew from $30 billion in 2002 to $66 billion in 2010; trade in goods went from $15.9 billion to $48.8 billion. The export of American goods to India during this period increased fourfold, reaching $16.4 billion, while the export of services tripled to $10.5 billion dollars.

In 2001, the United States lifted the de-facto embargo on the supply of US weapons to India.

In recent years, the United States has exported weapons worth of $6 billion to India. According to official Indian data, the United States has served as the main supplier of arms and military equipment to India since 2011, with Russia holding the second place. Washington and New Delhi plan to increase the scope of military and technical cooperation.

The United States and Canada are home to some 3.5 million immigrants from India.

However, the two nations have marked differences on a number of strategic issues, in particular, on Pakistan and Afghanistan. Climate change also remains a challenge, as New Delhi considers international commitments to reduce harmful emissions in the atmosphere a hindrance to its economic growth.

In recent years, relations between the US and India have been marred by a number of incidents. In December 2013, an Indian diplomat was arrested in New York on charges of domestic employee abuse, which caused a flurry of indignation in New Delhi. India has repeatedly asked the United States to provide an explanation in connection with media publications that US intelligence agencies were spying on Indian politicians. In addition, Indian Prime Minister Narendra Modi was denied entry into the United States up until his entry into office of prime minister.