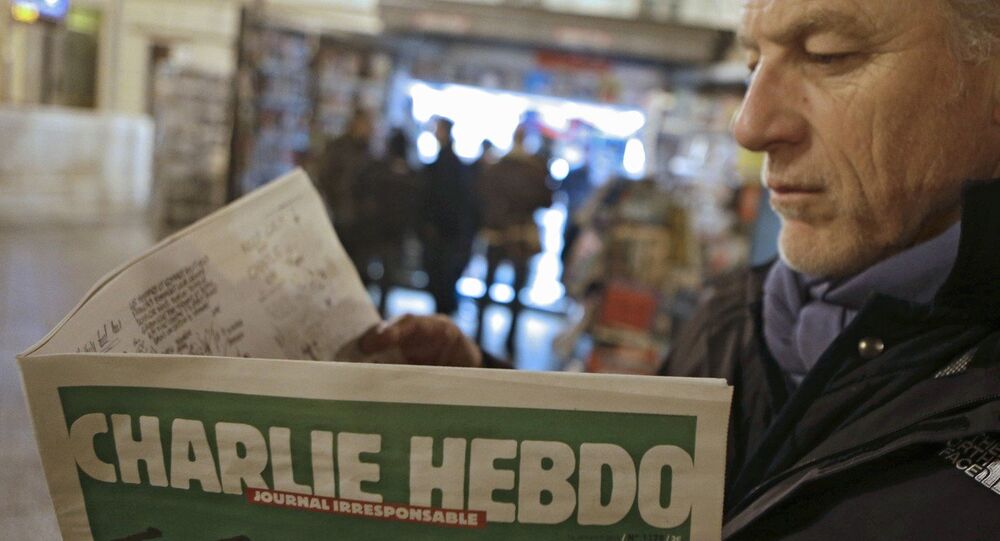 The Afghan Taliban have condemned the latest Muhammad cartoon to be featured on the cover of the French satirical newspaper, urging to stop its publication to prevent "further harming world peace" and added that the gunmen who attacked the newspaper office were "bringing the perpetrators of the obscene act to justice."

© Sputnik / Said Tcarnaev
Chechen Authorities Pledge to Respond to Charlie Hebdo’s Prophet Cartoons
MOSCOW, January 15 (Sputnik) – The Afghan Taliban have condemned the latest cartoon on the cover of the newspaper Charlie Hebdo, according to an English statement released by the Islamic fundamentalist group, as quoted by The Telegraph.

The latest issue of the satirical newspaper shows the Prophet Mohammad with a tear in his eye, under a sign which reads "All is forgiven", and holding a sign reading "Je suis Charlie" (I am Charlie).

This slogan has been used around the world by those showing solidarity with the victims of the brutal killings.

The group therefore "strongly condemns this repugnant and inhumane action and consider its perpetrators, those who allowed it and its supporters [to be] the enemies of humanity," The Telegraph quotes the statement as saying.

© Flickr / tinou bao
Turkish Court Bans Websites Depicting Latest Charlie Hebdo Cover
The statement also declared that the attackers, who killed 12 staff members and injured another 11 on January 7, were "bringing the perpetrators of the obscene act to justice."

The group implored that the publication must be stopped to prevent "further harming world peace", adding that to do otherwise would mean "the beliefs and sacrosanctity of over a billion people is desecrated and the world is pushed further into the fire of hatred and war."

Earlier on Wednesday, the Yemeni branch of al-Qaeda, which claimed responsibility for last week's terror attacks, warned that it would unleash more "tragedies and terror" in the future if Western countries did not stop their "insults" and the "spilling [of] our blood," according to an internet video released by the group.

© AP Photo / Lionel Cironneau
Experts Say Latest Charlie Hebdo Cover Might Aggravate Hostility
Also on Wednesday, the Director of the Ali Vural Ak Center for Global Islamic Studies at George Mason University, Peter Mandaville, warned that the recent cartoon on the cover of the newspaper could have a negative effect on French society.

"I don’t think that anyone can question whether this newspaper has the right to print this picture, this image on its cover. I think there is something of a question of whether this was, in social terms, the appropriate thing to do at this time," he said. "At times when there is the risk of increased polarization of society, the risk of increased hostility towards the Muslim community in France, there is a question of what this choice does to the overall social temperature in the country."

The most recent issue of Charlie Hebdo sold in record numbers; internet buyers were willing to spend as much as £1,550 per copy, far more than the usual €3 (£2.30) retail price, according to The Telegraph.

The newspaper announced that it was increasing its print run to 5 million to meet demand, compared with the publication's usual circulation of 60,000.