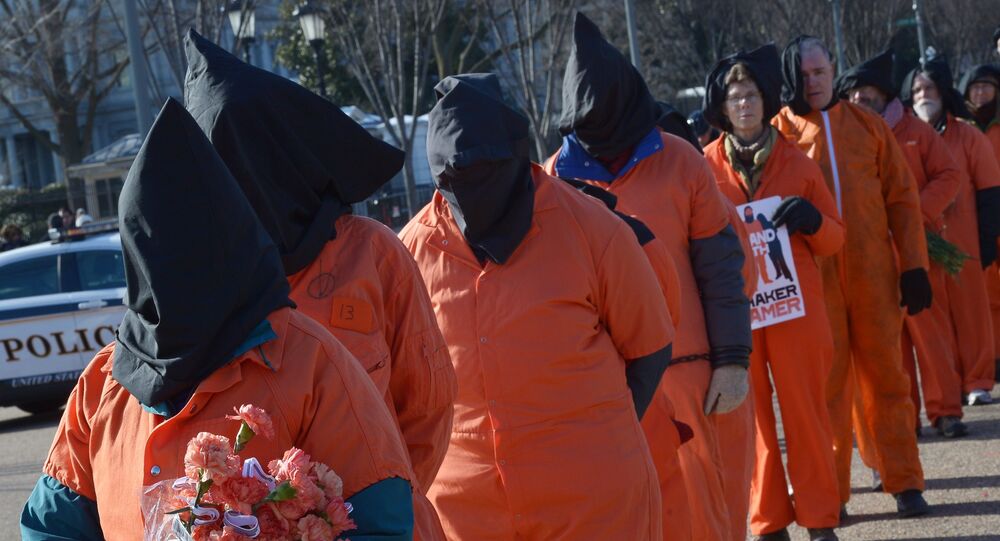 Guantanamo: why is it Still Open?

Last Sunday saw millions of people showing unity in the face of terrorism. It was also the 13th anniversary of the setting-up of the US detention centre at Guantanamo in Cuba. Protestors in Washington D.C. and London again demanded that President Obama makes good on his election promise to close it.

"US President Barack Obama doesn't have the courage to close it," declared Veterans for Peace campaigner Ben Griffin at a demonstration outside the US Embassy in London.

The vociferous protest called not just for ‘Gitmo' to be closed down but for the British government to be held accountable for its complicity in US torture programmes.

A heavily redacted US Senate report into CIA interrogation techniques which was released last month has stoked allegations of British involvement in torture and extraordinary rendition.

"It's not just about Guantanamo, it's about much broader issues," said Jean Lambert, Member of the European Parliament for the London Region, at the rally. "It's about solidarity around universal values."

Griffin, who served with the British Army in Northern Ireland, Iraq, Macedonia and Afghanistan, accused the British government of inciting radicalisation: pointing to other US detention centres such as Bagram, Abu Ghraib and Camp Nama, he said that when you intern hundreds of young men, they can become radicalised. "The [the government] make them hate us," said Griffin, adding that Britain is "a militaristic country".

"When you muck about in other countries, people get angry," he said.

Griffin and other speakers said British involvement in torture is both historic — not just a post-9/11 issue — and far-reaching. Aisha Maniar of the London Guantanamo Campaign said that everything which has been done and is being done at Guantanamo "was trialled in Northern Ireland in the 1960s".

Cameron ‘must act' during visit to Washington

As British Prime Minister David Cameron joined French President Francois Hollande and other world leaders at a Unity March in Paris on Sunday, Guantanamo campaigner Joy Hurcombe called for an end to "the war on Muslims" as well as the publication of the full torture report and the closing of Gitmo.

The head of the campaign to free the last remaining British citizen at Guantanamo, Shaker Aamer said that when Cameron meets President Obama in Washington this week "he has to act — let him bring Shaker home with him".

"No reason to have Guantanamo"

When we asked Nancy Hollander, US lawyer for Guantanamo inmate Mohamedou Ould Slahi, why Obama hasn't closed down Guantanamo, she told us:

"There are a number of reasons. The president didn't move fast enough to close it. People who have been cleared for release for many years are still there. They are not terrorists, they are not wanted for anything, they shouldn't have been there.

Although 28 prisoners were released from Guantanamo over 2014, and more — including Shaker Aamer — are said to be due for release early in 2015, there are still 127 men being held there.

Hollander's client Mohamedou Ould Slahi, who was captured in his home country of Mauritania in 2001 and has been in Guantanamo since 2002, "was one of the very worst treated people. He was tortured. He has never, ever been charged with a crime," she says. "We've filed a petition for a writ of habeas corpus on his behalf. In 2010, the judge ordered him immediately released. The government appealed, the case has now gone back to the district court, where it sits."

Mr Slahi has written his memoir, to be published on January 20 in a number of countries including the UK, which will be the first such book by someone who is still being held at Guantanamo.

US pressure on other countries

Hollander says that Obama can speed up the release of those who have been cleared for release, but the big problem now is that Congress has said they cannot come to the US.

"That's because we have congressmen who are full of unnecessary and unjustified fear. There have been 100 terrorism trials in New York since 9/11 and the last I heard, New York was still standing.

"We don't keep people in jail because we think they might commit a crime in the future."

After Uruguay recently accepted six men from Guantanamo, US Secretary of State John Kerry has been to South and Central American countries asking for other countries to take more prisoners cleared for release.

"One of the problems as I understand it," says Hollander, "is that in the past, the US was making demands on countries that take the prisoners — that they monitor them, not let them leave the country…

"And Uruguay refused to do that, so it took over a year to get the six people released because Uruguay said, when they come here, they come as free men. And they succeeded. The US makes these unnecessary demands on foreign countries which makes it even more difficult for the detainees to be released."

If PM Cameron fails to secure Mr Aamer's speedy release during this week's trip to Washington, he will surely come under more fire over the UK's ‘special relationship' with the US.