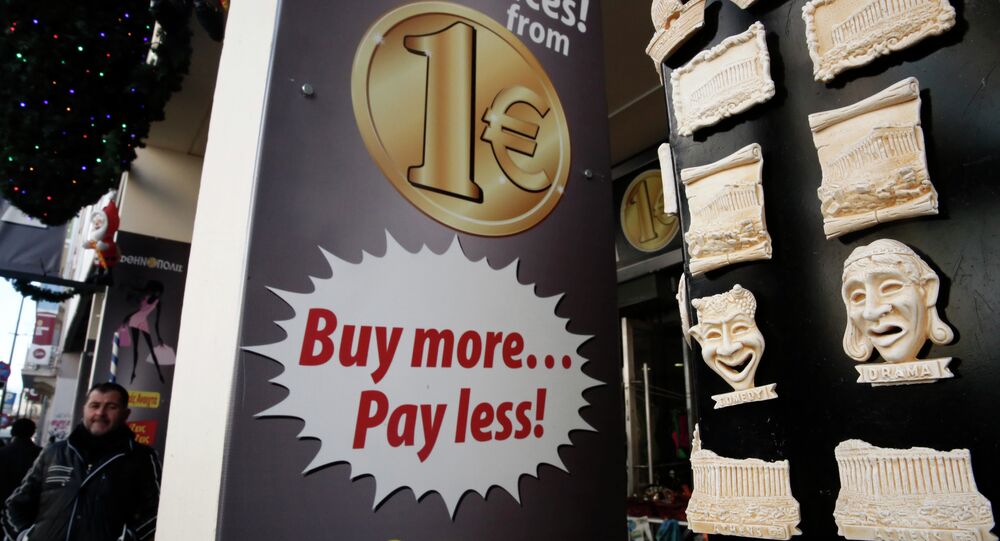 The Eurozone plunged into deflation in December for the first time since 2009, prompting the European Central Bank into considering printing money to save the beleaguered economy, ahead of a crucial election in Greece which could see it cancel its national debt.

The European statistics office, Eurostat, has announced that prices in the 18 countries using the Euro in December were —0.2% in December 2014, down from 0.3% in November. The major impetus was driven by the fall in energy prices (-6.3%, compared with —2.6% in November).

The deflation announcement will pile pressure on the European Central Bank (ECB) to undertake Quantitative Easing (QE) — printing money, effectively — despite opposition to the policy in Germany, the Eurozone's most powerful member state.

"It's impossible for the ECB to not pull the trigger later this month," Carsten Brzeski, an economist at ING-DiBa told the Financial Times. "It is more a question of how vague policy makers can be without disappointing markets."

With interest rates within the EU being so low, the ECB has been under pressure to introduce QE to inject even more cash into the Eurozone economy, to boost demand and make prices rise faster.

Analysts believe the decision to launch QE could be made at the ECB's next meeting on January 22. However, the ECB President Mario Draghi will have to persuade the sceptical German Bundesbank to come round to its way of thinking.

Draghi announced on January 1: "We are in technical preparations to adjust the size, speed and compositions of our measures early 2015, should it become necessary to react to a too-long period of low inflation. There is unanimity within the Governing Council on this".

Tom Rogers, senior economic adviser to the EY Eurozone Forecast, told Sputnik: "The inflation numbers will amplify calls for the ECB to start purchasing sovereign bonds when it meets later this month, but we think proponents of such a measure will be disappointed for a couple of reasons. Firstly, the fall in inflation into negative territory is entirely due to a sharp fall in energy prices, with domestically generated price pressures more stable.

"As such, the fall in prices is on balance a positive for the Eurozone economy. Secondly, the ECB has repeatedly underlined the need to restore bank lending, and as such its balance sheet expansion will be better focused on asset purchases that support this.

"Separately, the latest unemployment data offer a stark reminder of the divergences within the Eurozone — while Germany's unemployment rate remained at a record low, Italy's rose to a record high. Mario Draghi is right to note that more has to be done in several Eurozone economies to improve the regulatory environment to support business formation and job creation."

Germany's Problem? Greece is the Word

In 2001, when Greece joined the Eurozone, the — then — ECB President Wim Duisenberg, warned that Greece still had a lot of work to do to improve its economy and bring inflation under control. Greece had been left out of the Eurozone for failing to meet the EU's economic criteria.

Thirteen years ago, the Greek Government was warned it had to adopt a tough austerity programme, making deep cuts in public spending. It did not.

Economists have said the ECB needs to set further targets for the Greek (and Portuguese) central banks to set aside extra cash to cover potential losses from such bond-buying. However, local politicians —already constrained under hugely unpopular austerity measures — are unable to resists the rise of anti-Europe sentiment

Greece is due to hold parliamentary elections on January 25. The leftist party, Syria, has said it will cancel austerity and a large part of its national debt, making any ECB purchases of Greek bonds more of a risk.

ABN AMRO economist Nick Kounis told Reuters: "We expect the ECB to announce that it will embark on a large scale asset purchase programme, including sovereign bonds, at its January meeting. However, it may well hold off from providing any further details until March, giving it a chance to see how the situation in Greece turns out."

The reversion to deflation, back to the levels of 2009 is likely to cause panic on the markets. While economists will argue that QE will be the favoured option, politicians in Germany and Greece will be at odds with the ECB. Germany — with its grip over the Bundesbank and the ECB — believes it has baled out southern countries enough.

If Greece were to exit the Eurozone, following its election, questions will be asked about which other countries may follow. And Germany may have questions to ask about its reluctance to support the ECB in QE tactics. But — perhaps more — why it accepted Greece into the Eurozone, when it knew its economy was out of kilter with the rest of the EU.