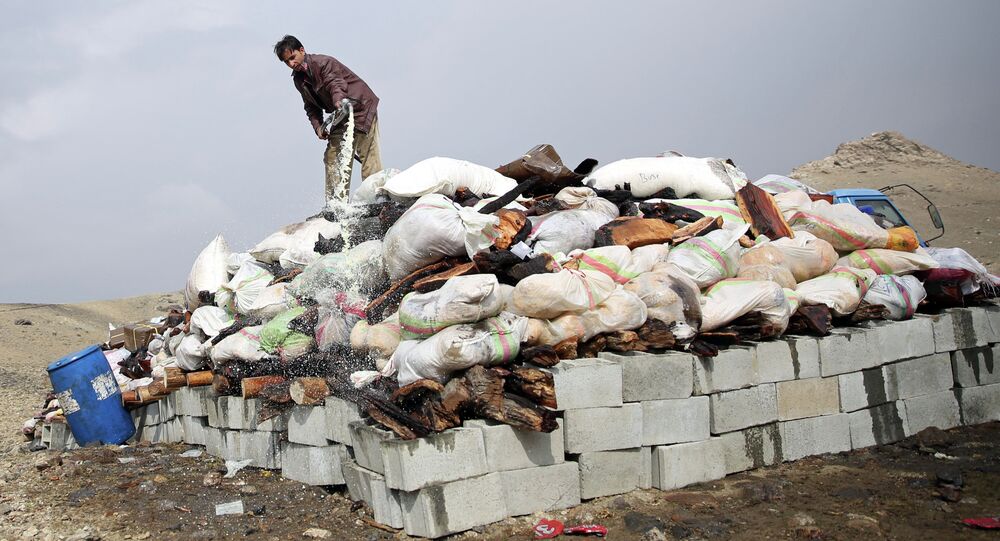 Russia and Iran signed an agreement on the exchange of operational information on drug crops and drug laboratories and on conducting joint operations to find and intercept illegal drugs and those who traffic them.

© Sputnik / Alexei Andreev
US Complicity in Afghan Drug Production Causes Rise in 2014: Iran Minister
MOSCOW, December 8 (Sputnik) — Russia and Iran on Monday adopted a joint plan to counter illegal drug manufacture, smuggling and use over the next four years.

The two countries intend "to develop mechanisms for the exchange of operational information, including information on drug crops and drug laboratories, and for the conducting of joint search operations in line with national legislation, including controlled deliveries, to shut down the smuggling of drugs," according to the agreement signed.

Moscow and Tehran also agreed to exchange information on drug transit from Afghanistan, including the use of the Caspian Sea.

Decisions were also made to improve information exchange on drug traffickers, their routes, investigating new types of illicit drugs as well as members of the financial community used by drug dealers to launder criminal proceeds.

Russia and Iran will exchange experience, organization and resources to find and intercept illegal drugs and those who traffic them. The countries pledged to improve treatment for drug addicts and increase the teaching of drug prevention.

© AP Photo / Hoshang Hashimi
UN Praises Russian Contribution of $100,000 to Help Afghan Refugees in Iran
During Monday's meeting, Russia and Iran also agreed to bring the issue of eliminating drug production in Afghanistan before the UN General Assembly in 2016.

"It is important to propose including the issue of the importance of eliminating the Afghan drug production in the agenda of the special session of the UN General Assembly in 2016 on the global drug problem," a statement issued on the meeting said.

Moscow and Tehran agreed to initiate broad discussions in different international arenas on the global problem of large-scale heroin and cocaine production.