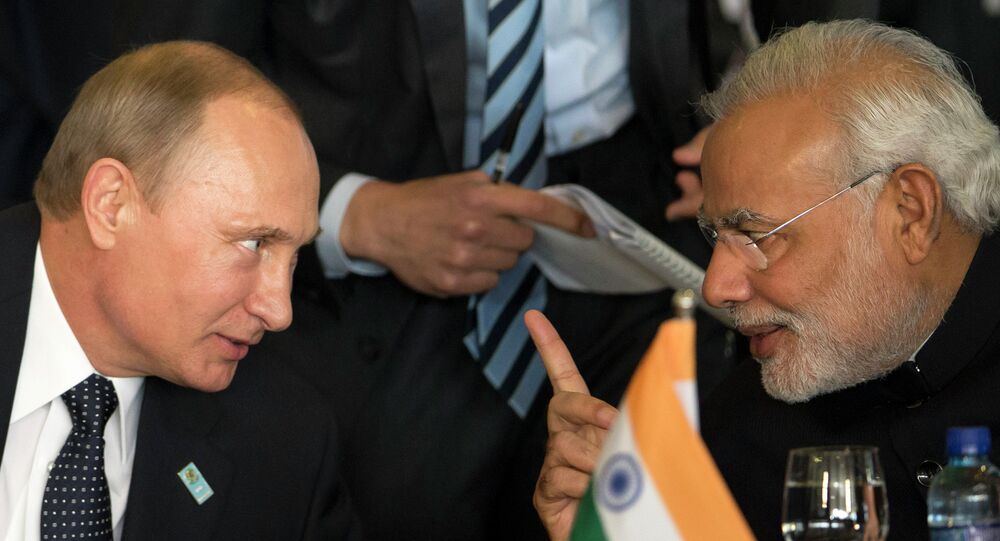 When Popularity Meets Power: Modi To Meet Putin In India Next Week

Indian PM Narendra Modi is back in the lead of Time Magazine’s poll for the Person of the Year, and next week he will host Forbes’ Most Powerful Person In the World, President Putin. Sputnik interviewed Indian Ambassador to Russia about the prospects for deeper relations between the two countries.

Mr. Raghavan was enthusiastic about the upcoming visit, and underlined the long and fruitful relations that Russia and India have enjoyed for decades. He spoke confidently and reassuringly about bilateral solidarity and the personal friendship that Presidents Putin and Modi already share, after having met twice in the last six months. The real jewel of the interview, however, was when Mr. Raghavan spoke about future plans for an enhanced economic and geopolitical partnership, which has exciting implications for the multipolar world.

The Russian-led Eurasian Economic Union (EEU) will formally enter into force next year, and India is already exploring avenues for cooperating with it. Mr. Raghavan said that his country wants to “strengthen the economic engagement” with the trade bloc, and “expect(s) to create concrete institutional mechanisms soon for structured discussions on this.” He says that once each country’s business community becomes more aware of market opportunities in the other, economic cooperation can finally reach the high level of political partnership that both countries currently enjoy. They even plan on using national currencies for bilateral trade, which would strengthen their economic sovereignty and contribute to the erosion of the dollar’s dominance.

In effect, an expanding relationship between the EEU and India would demonstratively prove that Russia is not at all isolated, and that it has in fact resolutely redirected its economic focus from Europe to Asia. The consequences of this shift would be for Russian business to gain deeper access and a stronger foothold in the world’s second most populous country, with all of the resultant long-term benefits. Such a move would solidify Russia as a Eurasian economic power and also invite dynamic Indian businesses to invest in its domestic economy and assist in modernizing various aspects of it.

From Russia to India, Through Iran

Some of the most salient details in Mr. Raghavan’s interview were the specifics he mentioned about the proposed Russia-India Corridor, which is anticipated to run through Iran. He outlines the tentative path as going from Mumbai’s port in India to its Iranian counterpart in Bandar Abbas. From there, it’ll travel overland to the Caspian Sea and then onwards to Astrakhan in Russia. Both India and Russia already have valuable strategic partnerships with Iran, so it’s a win-win for all parties in this case. Also, by going through Iran, it helps bring the country out of international economic seclusion (largely due to the punitive Western sanctions) and strengthen its real, non-resource-based economy. Due to its pivotal role in facilitating trade between the two, Iran might then be expected to enter into some type of trilateral pact to make this relationship more formal, possibly via some type of privileged agreement between the EEU and India.

To Indochina and Beyond

Just as Russia is looking east, so too is India, and its recently unveiled ‘Act East’ policy will assist with its interaction in Southeast and Eastern Asia, according to Mr. Raghavan. This could provide even more opportunities for Russia’s economy in the future, since if the Russia-India Corridor flourishes, then the economic momentum could easily spill over to the east. India’s historic and cultural ties with Indochina can easily be transferred into economic ones if properly managed (and Modi has a track record of effective economic management), which could link up with Russia’s burgeoning relations with Vietnam to jointly open up Southeast Asia to both of them. This is already one of the most dynamic economic regions in the world today, and if India and Russia can both enter this space together and coordinate their activity there (each helping the other in its own way), then their economies will be all the better for it and the Russian-Indian strategic partnership might become just as profitable for Moscow as the Russian-Chinese one.