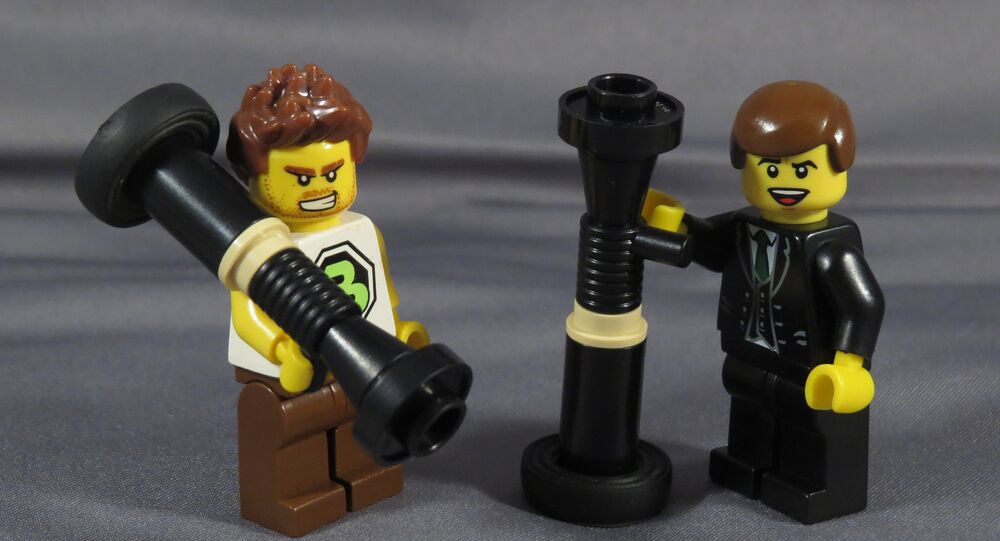 Arms Experts Believe Most Weapons In Ukraine Are Locally Sourced

A report on the weapons used in the conflict in East Ukraine released by the Armament Research Services (ARES) suggests that while independence supporters were likely to have received arms from external parties, “the level of state complicity in such activity remains unclear”.

ARES is an apolitical, policy neutral organisation, providing a technical assessment of the arms and munitions identified and evaluating likely sources for these. The report, called “Raising Red Flags: An examination of arms and munitions in the ongoing conflict in Ukraine” was initiated and produced solely by ARES with no outside funding, its director N.R. Jenzen-Jones told Sputnik UK. “For any outputs funded by a third party, we have a strict policy to disclose such support,” he stressed.

The report examines over 100 distinct weapons systems, over 60 different types of munitions, and over 70 different models of armoured fighting vehicles, as well as miscellaneous associated materiel, in the context of the ongoing conflict in Ukraine. Particular attention is paid to items which may indicate flows of arms and munitions into and within the affected areas of Ukraine. Beginning with an assessment of the arms and munitions employed during the initial unrest in Kiev, in February 2012, the report documents relevant materiel up until the time of publication on 17 November 2014.

“As is typical of conflict in the internet age”, the reports says, “commentators are quick to point to apparent discrepancies in photographs and video as evidence of external assistance. This conflict, with its internecine trappings, has been no exception, notably in the misidentification of various older anti-tank weapons as their modern replacements.” Ill-informed reporting and the spread of disinformation, Mr. Jenzen-Jones told Sputnik UK, have resulted in a number of erroneous claims being made, both by sources supportive of pro-Russian separatists and by sources supportive of the Ukrainian government. “Many such claims are predicated on the incorrect identification of the arms and munitions in question, and it is our hope that this report will provide an informed counterpoint to such claims, ARES Director told Sputnik UK.

ARES report provides evidence of misidentification: “For example, the 1970s vintage NSV heavy machine gun is virtually indistinguishable from its replacement in Russian service, the Kord. Because the latter entered service in 1998, a sighting of this weapon might suggest Russian assistance to the rebels. Because the NSV can be encountered with features superficially similar to the Kord, it is easily misidentified. Likewise, the twenty plus year old RPG-26 is easily mistaken for the diagnostically more modern RPG-30, which can also lead to unfounded conclusions. Yet amidst this type of uninformed speculation and anomaly hunting, the trained and critical eye can discern instances of genuinely ‘alien’ weapons and pieces of equipment – so-called ‘flag items’ – that can serve as significant indicators of external supply.”

The information in the report was collected from a variety of sources, ARES Director N.R. Jenzen-Jones told Sputnik UK, including publicly available mainstream media and social media sources, supplemented by material provided to ARES by journalists, aid workers, and local sources within Ukraine. Mr. Jenzen-Jones admitted that verification of some publicly available material can be difficult, however the identified arms and munitions typically speak for themselves and locations can often be gleaned from imagery and video. Additionally, Mr. Jenzen-Jones said, “we have attempted to draw on sources from varying political affiliations and, wherever possible, multiple sources have been used”.

Recognising the limitations of research into the complicated and intertwined history of Soviet, Russian and Ukrainian arms industries, ARES say they are confident in their conclusions that:

—  The most significant sources of arms, munitions, and armoured vehicles for pro-Russian separatists in eastern Ukraine remain those which are domestically available;

—  It is very likely that pro-Russian separatist groups in eastern Ukraine have received some level of support from one or more external parties.

“As we make clear in the report, the level of state complicity in such activity remains unclear”, Mr. Jenzen-Jones told Sputnik UK.

With his permission we are publishing excerpts from the report.

Raising Red Flags: An examination of arms and munitions in the ongoing conflict in Ukraine

Despite the initial influx of readily identifiable foreign arms and munitions with Russian forces in Crimea, it is safe to say that the majority of items documented during the conflict to date have originated within Ukraine. The Ukrainian inventory last received a major update in the early 1990s, and a great deal of ageing equipment remains stockpiled at facilities around the country.

With luck, separatist forces are able to capture contemporary types from government-controlled military bases, even if the individual weapons themselves might be more than twenty years old. All manner of arms and munitions and armoured fighting vehicles have been appropriated, and frequently, recaptured by Ukrainian forces. Other separatist units make do with what they can find, which can include obsolete systems. This report documents several examples of obsolete arms and munitions — even Second World War-era main battle tanks — pressed into service by pro-Russian separatist forces.

In significant quantities, these legacy systems can have strategic implications. In April, in the earlier days of the conflict, an arms depot in Soledar containing large quantities of "outdated" weapons was being targeted by separatists and defended by the Ukrainian government.

© Photo : Сводки от ополчения Новороссии
A pro-Russian separatist fighter displays the array of weapons which he claimed were taken from Ukrainian soldiers after a raid, in the town of Horlivka, eastern Ukraine. May 22 2014.

It appears that significant supplies of small and medium calibre ammunition were also sourced in this way. An analysis of video footage, images, and samples collected during field research support the idea that the huge Soviet-era stockpiles in Ukraine itself have been exploited to arm both Ukrainian government and separatist forces. The overwhelming majority of the small and medium calibre ammunition documented in Ukraine was produced in the Soviet Union, between 1962 and 1988. Small quantities of ammunition were produced in Ukraine after the fall of the Soviet Union.

The one cartridge documented from outside the former Soviet Union was produced in Germany, and is likely a sporting cartridge.

In some cases, defecting units from the Ukrainian military may have taken significant quantities and types of arms and munitions, and armoured vehicles, with them. Separatist fighters have also claimed to have purchased weapons from corrupt or sympathetic members of the Ukrainian security forces. Improvised arms and munitions have also seen limited use in this conflict, with some separatist units operating workshops to repair, refurbish, and retrofit arms, munitions, and armoured vehicles.

There have been widespread allegations of external support to pro-Russian separatist forces in eastern Ukraine. The Russian government, in particular, has been accused of providing all manner of arms, munitions, and armoured vehicles to separatist fighters. Some of these accusations have proven demonstrably false, whilst the veracity of others remains uncertain. A number of items of particular note — so-called ‘flag items' — have been documented in this report. Typically, these are items which were produced outside of Ukraine, and are not known to be in the inventories of the Ukrainian security forces.

There is less evidence to suggest the supply of small and medium calibre ammunition from external sources. There are several explanations for this, but this is likely to be, primarily, a result of the significant ammunition stockpiles within Ukraine.

Whether or not directly supplied by foreign governments, some arms and munitions have certainly entered Ukraine from foreign states. On July 3, the Organized Crime and Corruption Reporting Project (OCCRP) reported that a Moldovan criminal figure, Ion Druta, had been involved in supplying the pro-Russian movement with SALW appropriated from Russian military. Druta spoke of being able to supply large quantities of AK type rifles. According to Druta, the weapons came from the Russian 14th Army, based in Transnistria (OCCRP, 2014). The undercover deal arranged by OCCRP reporters was rather more modest, however, consisting of an RPG-18 anti-tank system and a TT-33 pistol.

ARES has assessed that it is very likely that pro-Russian separatist forces have received some level of support from one or more external parties, however the level of state complicity in such activity remains unclear. Despite the presence of arms, munitions, and armoured vehicles designed, produced, and allegedly even sourced from Russia, there remains no direct evidence of Russian government complicity in the trafficking of arms into the area. The majority of arms and munitions documented in service with separatist forces have evidently been appropriated from the Ukrainian security forces and their installations within Ukraine. The 1970s and 1980s vintage ex-Ukrainian military inventory is likely to continue to predominate. The various older and expedient types of arms and munitions outlined in this report should not be taken to mean that separatist forces are ill-equipped. Some of the more capable arms and munitions available to them have been outlined.

However, ageing light weapons systems and larger ordnance, along with MANPADS and other SAM systems, will all retain a niche amongst pro-Russian forces in Ukraine for as long as government forces maintain their overwhelming advantage in air power and armour. The Ukrainian regime has access to more powerful weapon systems, in greater numbers, and with a more robust logistical chain than separatist forces could hope to muster without overt support from a foreign power. As it stands, the limited but noteworthy external support pro-Russian separatist forces have received has not proven significant enough to turn the tide in their favour.