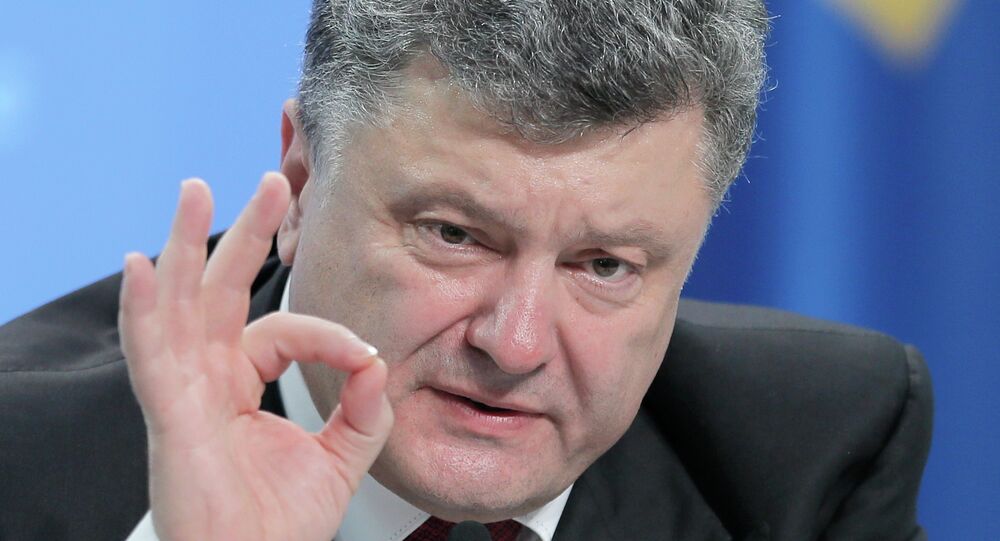 President Poroshenko of Ukraine has told Bild magazine in Germany that he is still negotiating the sale of his business which he promised to sell when he ran for president last May.

A year ago Ukrainians flocked to the Maidan square in central Kiev in protest against corruption, the oligarchs and in support of European values.

In the process of a violent coup they swapped one oligarchic ruler for another and introduced a European first – a president-cum-banker. Europeans must be wondering if such a conflict of interest is indeed in line with their declared values.

During the presidential election in May 2014 Mr. Poroshenko promised to sell off his massive business empire that spans banking, confectionary, agriculture, energy, auto and shipbuilding, and mass media. However, the President is refusing to sell his major media asset Channel 5 TV claiming he can guarantee its editorial independence. In the country where media has traditionally been a political weapon this is easier said than done. And what is officially on sale out of the impressive list of other assets, at least for now, are chocolate factories, including two in Russia and a shipyard in Sevastopol, Crimea, which has a contract with the Russian Navy.

While the shipyard’s performance was affected by the process of re-registering it as a Russian company, the Russian chocolate factories netted Mr Poroshenko $70 million in revenue last year. Overall, his sweet empire is ranked 20th in the world by the Candy Industry publication with net sales of $1 billion in 2013. No wonder it’s painful to get rid of such a money spinner. Mr. Poroshenko explains that it is not easy to find a buyer at the time of economic and social turmoil in Ukraine. The estimated value of his business empire has almost halved from the $2.6 billion it stood at before the troubles started a year ago.

Selling one’s assets at such a loss is not something a shrewd businessman would like to consider. Poroshenko appears particularly reluctant to sell off his chocolate business which he calls a fifth child in his family. After all, he made his name – and fortune — in sweets that are marketed under an abbreviation of his family name – “Roshen”.  Analysts predict that its value may rise to $2 billion if peace is restored in East Ukraine.

But for President Poroshenko his business liability is outweighed by a political one. Ukrainian social media are full of disgruntled voices accusing the president of betraying the ideals of the EuroMaidan ”revolution” for which Ukrainians paid a heavy price in human lives. Some wonder how a man who had been in politics ever since 1998 managed to amass such a fortune and why he did not sell it while he was a government minister. Now, as an elected President, Poroshenko needs to distance himself from other oligarchs and show that he is ready to fight Ukraine’s deadliest enemy – the endemic corruption.

Short of selling off one’s business there are, of course, ways of distancing oneself from it by transferring the operational management into a trust.

And that’s what Mr. Poroshenko has done — he transferred the management of his business assets to an equity fund “Prime Assets Capital”, and appointed as its head … his father Oleksiy.

The fund has recently announced that it had chosen Rothschild and Company to advise them on the sale of President Poroshenko’s businesses. The world famous asset management experts are pairing up with a Ukrainian property fund Investment Capital Ukraine, ICU to complete the necessary legal procedures in Ukraine. The company, one of the biggest and more successful asset managers in the country has a history of representing business interests of Mr. Poroshenko. One of its founders and key shareholders, Valeriya Gontareva is now Head of Ukraine’s Central Bank (NBU). She was recommended to this post in June this year by …President Poroshenko. Upon her appointment to the NBU she swiftly sold her stake in ICU and resigned from its Board. President Poroshenko is yet to follow her example in resolving his own conflict of interest.

Indeed, he still owns a private bank, International Investment Bank which has delivered an eye watering growth of 50% over 9 months of this year. That’s impressive, given the near collapse of Ukraine’s economy, exacerbated by a year-long civil strife and insurgency. The dynamic of Mr. Poroshenko’s bank is in stark contrast to other Ukrainian banks that are seeing their assets squeezed. While they are closing down local branches, Poroshenko’s bank is happily opening new ones. They are raising awkward questions as to where the President’s bank gets its funding from. Ukrainian banking analysts believe the bank’s liquidity is boosted among other things by deposits of the country’s top officials who keep their savings in dollars. This is a repeat scenario of what happened to the bank owned by the son of the ousted president Yanukovych. Its assets also grew at a staggering rate while the Yanukovych clan was in power. So has anything changed with the change of president after the Euromaidan?

No wonder, one of the prominent politicians, a former defence minister and presidential candidate Anatoliy Hrytsenko accused Poroshenko and another banker Ihor Kolomoiskiy, the governor of Dnipropetrovsk Region of enriching themselves at the expense of millions of Ukrainian families.

The apparent reluctance of Poroshenko to part with something so dear to his heart leads some analysts to believe that there could be a “fictitious” sale to a “family-friendly” company with an option of eventual “repurchase”.  After all, Rothschild and Cie are world-renowned wealth managers not averse to off-shoring clients’ assets to safe havens, as revealed by the International Consortium of Investigative Journalists (ICIJ) last year. The Ukrainian agents for the sale of Poroshenko’s assets, ICU also have an off-shore company, Westal Holding registered in Cyprus. Unless the assets are sold off through a public auction, analysts say, there would always be a suspicion that the President has retained the ultimate control of his business empire.

Another conceivable way of safeguarding his business empire would be for Poroshenko to put the asking price too high and bide his time, since there is no deadline for the sale. The Ukrainian President has made a promise to sell his business and that may be enough for now. After all, he has made other promises, for example to recapture Crimea. Some promises are easy to give but hard to fulfil.