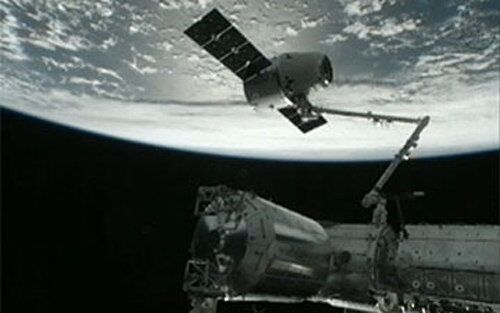 The SpaceX spacecraft launched to resupply the ISS was grappled by the Canadarm2 controlled by NASA astronaut Reid Wiseman and European Space Agency astronaut Alexander Gerst at 6:52 a.m. EST (10:52 GMT) on Tuesday. The Dragon will remain attached onto the Harmony node for four weeks while the Expedition 41 crew unloads some 4,885 pounds of supplies including hardware, experiments, computer gear, and spacewalk equipment.

The delivery marks the fourth SpaceX mission for NASA's Commercial Resupply Services contract, with eight more missions scheduled to deliver some 20 metric tons of equipment to the station.

The delivery supports some 255 ISS experiments including the ISS Rapid Scatterometer which will be used to monitor ocean winds to calculate surface speed and direction used in weather forecasting and hurricane monitoring.

The Dragon also brought supplies for a student designed experiment which uses fruit flies as a means of examining how diseases work on a cellular and molecular level in addition to mice for a study on the effects of microgravity on animals.

The spacecraft brought a 3-D printer to be used to quickly manufacture parts and technology needed by the station. This will mark the first time a 3-D printer has been used in space.

The Dragon spacecraft, designed by SpaceX, launched on September 21 from Space Launch Complex-40 at Cape Canaveral Air Force Station in Florida. The Dragon is the only commercial spacecraft in the world to successfully deliver cargo to the ISS and return to Earth. The spacecraft is scheduled to fly back to Earth on October 18 bringing back some 3,300 pounds of cargo. The spacecraft will arrive via splashdown in the Pacific Ocean, west of Baja California.