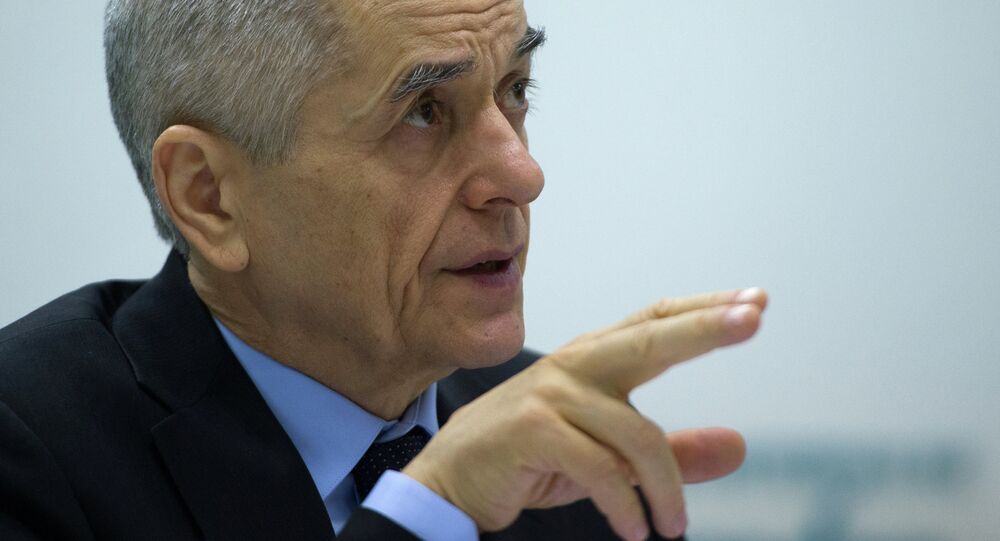 A US-funded laboratory in the former Soviet republic of Georgia, accused by a prominent Russian official Monday of developing biological weapons, has been repeatedly touted by US officials as a key tool in guarding the region against dangerous infectious diseases.

WASHINGTON, October 14 (RIA Novosti) – A US-funded laboratory in the former Soviet republic of Georgia, accused by a prominent Russian official Monday of developing biological weapons, has been repeatedly touted by US officials as a key tool in guarding the region against dangerous infectious diseases.

“This laboratory has the potential to become a regional center for disease surveillance, research, as well as biosafety and security,” US Sen. Richard Lugar said in a speech last year at the christening of the laboratory that bears his name in the Georgian capital of Tbilisi, several months before he retired from the Senate.

The laboratory, formally known as the Richard G. Lugar Center for Public Health Research, became the target of a renewed attack by Russian authorities Monday when Gennady Onishchenko, head of the state consumer rights watchdog Rospotrebnadzor, expressed “extreme concern” about the lab.

“According to our assessments, this laboratory constitutes an important offensive link in the US military-biological capability,” Onishchenko was quoted by Russian media as saying, adding that compounds developed at the facility could be secretly employed to destabilize the political and economic situation in Russia.

It was the latest in a series of accusations this year by Onishchenko that the research center could be used for nefarious purposes, allegations that US and Georgian officials have repeatedly denied.

“There still seems to be misperception that this laboratory is a military facility or is engaged in biological weapons research which is absurd,” Richard Norland, the US ambassador to Georgia, said in July.

Washington has funded the research center to the tune of $150 million since its groundbreaking in 2004, according to US officials, an initiative that came in the wake of the Rose Revolution that swept US ally Mikheil Saakasvhili to the Georgian presidency.

Saakashvili’s ascent rattled officials in Moscow, many of whom saw the revolution as engineered by the United States and its allies at the expense of Russian interests.

Years of diplomatic tensions between Washington and Moscow ensued as Saakashvili sought greater integration with the West, with the nadir coming during Russia’s crushing victory against Georgian forces in a brief 2008 war over the breakaway Georgian regions of South Ossetia and Abkhazia.

The laboratory opened in March 2011 as the Central Public Health Research Laboratory, with Lugar saying it will “serve as a manifestation of America’s commitment to Georgia.”

The US Army Medical Department’s Medical Research and Materiel Command (USAMRMC) has been tasked with training Georgian scientists at the lab in areas such as “pathogen research, biosecurity, biosurety and facility operations and maintenance,” according to the USAMRMC.

The goal of the US military and the Georgian government “is to address the threat of infectious diseases at the source with approaches that utilize modern technological developments applied from the rapidly expanding knowledge base in public and animal health,” Jamie Blow, director of Overseas Operations for Walter Reed Army Institute of Research, said last year.

Swine fever outbreaks can seriously impair the animal breeding industry because the disease can neither be treated nor prevented by vaccination, and Onishchenko suggested in July that the virus had likely come to Russia from the US-funded laboratory in Georgia.

Russia’s objections to the lab have come from more powerful corners of the government than its consumer protection watchdog. In an apparent reference to the facility, Russia’s Foreign Ministry said in July that it has “serious concerns” about “the US Defense Department’s biological activity near Russia’s borders.”

US officials have said the facility is run by the Georgian government and have dismissed accusations that secretive research is being conducted there.

“It’s an open, transparent facility,” Norland said earlier this year. “We believe there is interest, including from Russian scientists, in taking advantage of the resources of this state-of-the-art facility and we hope they’ll do that.”