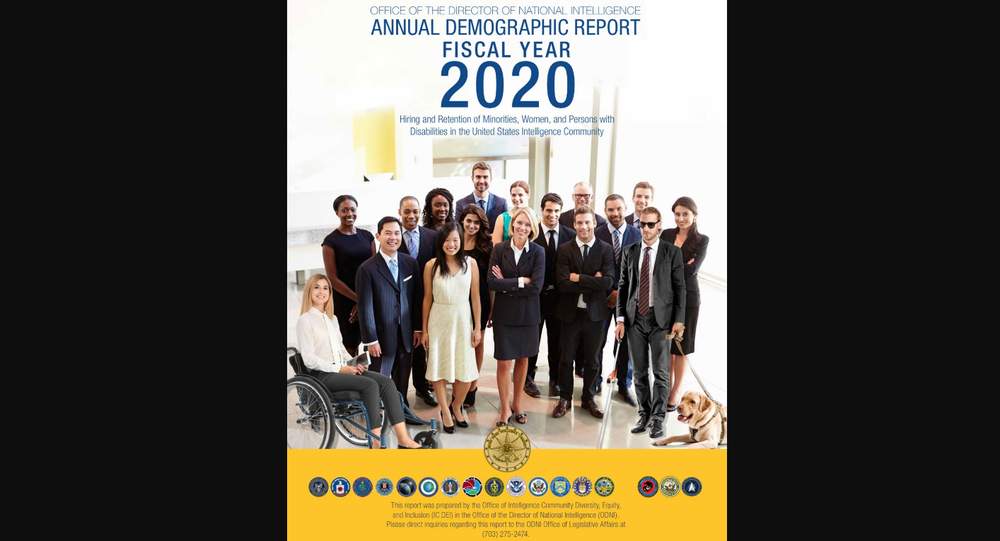 While some netizens joked about the quality of the picture in question, others questioned the level of diversity displayed in the image.

The US Office of the Director of National Intelligence (ODNI) has recently come under fire online over its use of a stock image on the cover of their annual demographic report subtitled "Hiring and Retention of Minorities, Women, and Persons with Disabilities in the United States Intelligence Community".

According to the New York Post, the cover of the report in question featured a Shutterstock image titled "Portrait Of Multi-Cultural Office Staff Standing In Lobby".

However, the image on the report’s cover was apparently photoshopped, as two people featured in the picture – a blind man with a guide dog and a woman in a wheelchair – do not appear in the original stock photo.

"For the cover of its diversity report, ODNI bought a stock photo called 'Portrait Of Multi-Cultural Office Staff Standing In Lobby' and then photoshopped a woman in a wheelchair and a blind guy into it", quipped Republican political consultant Luke Thompson as he shared the picture on Twitter.

For the cover of its diversity report, ODNI bought a stock photo called "Portrait Of Multi-Cultural Office Staff Standing In Lobby" and then photoshopped a woman in a wheelchair and a blind guy into it. https://t.co/BpvOg17CbA https://t.co/G59aVvba58 pic.twitter.com/Em6C1cFuFl

​Quite a number of social media users were left either amused or upset by the revelation.

I'd respect it more if they photoshopped some dark glasses on the dog.

I think I could photoshop better & I’m some middle aged woman in podunk nowhere who can’t photoshop for shit.

Even the blind guy thinks this is a bad Photoshop.

Thank goodness we have the very best and brightest running our intelligence operations. pic.twitter.com/d5E3WvPnfv

Things have really gone downhill in the graphics department since the JFK autopsy and the moon landings. They used to be really good at this.

Some also questioned the level of diversity presented in the photo.

But apparently didn't even notice that no one in this super-diverse office appears to be over 35? Is this the lobby of LogansRun Inc.?