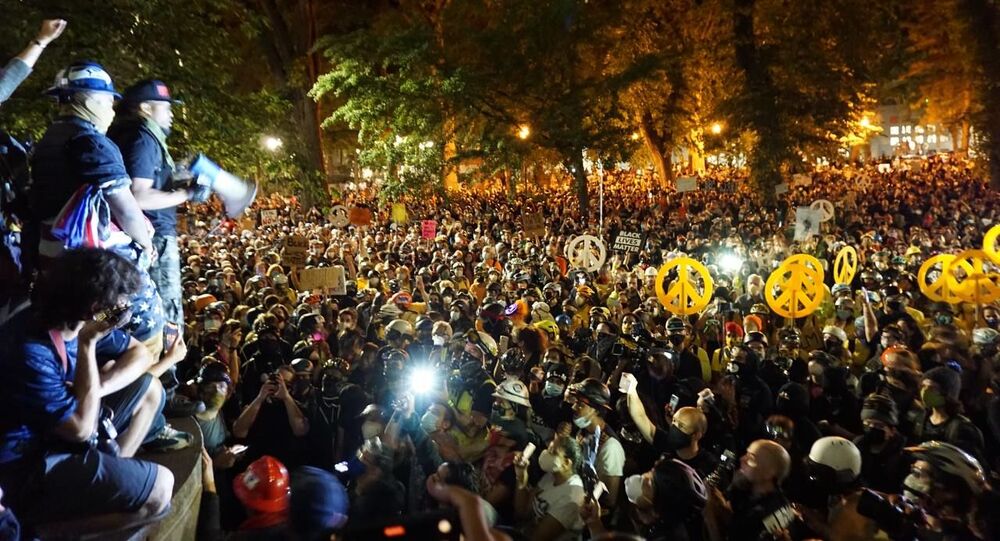 'Symbol of Hatred': Utah BLM Causes Twitstorm With Attack on Stars and Stripes

2020 saw an upsurge in Black Lives Matter protests following the death of black man George Floyd during an arrest by Minneapolis police officers — with demands to "defund the police" at the forefront in the election year.

Black Lives Matter activists in the US state of Utah have denounced the Stars and Stripes as a "symbol of hatred".

The BLM Utah chapter posted the provocative comments on Twitter earlier this week.

© AP Photo / BRENDAN MCDERMID
BLM Chapter Founder Reveals 'Ugly Truth' About Group's Agenda - Video
BLM Utah founder Lex Scott admitted the tweet was intended as a provocation, but claimed it was in response to Saturday's "Reclaim America" march through Philadelphia — some 2,000 miles away  — by 200 masked members of white supremacist the Patriot Front.

"The point of the post was to make everyone uncomfortable," Scott told the Salt Lake Tribune. "The American flag is taught to us from birth to represent freedom, life, liberty and the pursuit of happiness."

The BLM Utah chapter's Twitter account was flagged as "protected" on Thursday afternoon, meaning only approved followers could see its posts.

BLM national co-founder Patrisse Cullors resigned from the Black Lives Matter Global Network Foundation in May, after it emerged she had bought a $1.4 million mansion in California and owned other properties.