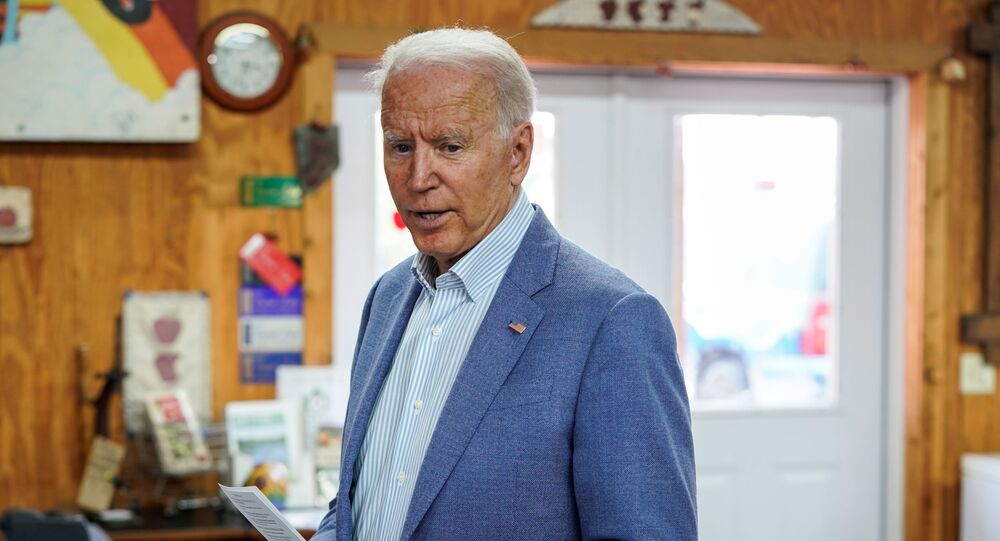 Concerns about Biden's mental health have recently been raised by several GOP Representatives, who asked Biden to follow the example of ex-president Donald Trump and take a cognitive test to prove he is fit for the presidency.

It seems Joe Biden was taken by surprise when a reporter at King Orchards farm store in Central Lake, Michigan, asked the US president about the allegations that Russia played a role in the most recent hack.

"With the most recent hack by the Russians, would you say that this means...", the reporter started her question but was cut off by Biden, who said that the administration wasn't sure "it's the Russians."

The exchange was more than a little awkward considering Biden went on to say that he had just been briefed on the matter and then — he took a note out of his jacket while putting on a pair of glasses: "I'll tell you what they sent me."

The notes apparently were of little help, since Biden did not say respond with any concrete information.

Nevertheless, the video has received massive reactions on social media — from harmless jokes to bitter sarcasm and even mockery, with many netizens questioning Biden's cognitive skills as the leader of the country.

Needing cue cards to talk to “Random People” is the sign of a strong leader with all his mental facilities! I’m thankful to have such strong leadership in this country.

Can’t even answer a simple question without his handlers notes

It took him a really long time to say nothing at all.

Well, those that cheered when he was installed in office must be cringing every time they see this man.

God have mercy on this world

Someone, however, came to the president's defense, saying Biden was only trying to provide precise information and people were overreacting.

If one wrong word is spoken by the president in an impromptu setting such as this, it can have dire consequences. He’s just being precise with his answer in a time with limited knowledge of the true identity of the hackers. People are trying so hard to nail him and failing.

In mid-June, congressman and former White House physician Ronny Jackson called on President Biden to undergo a cognitive test and share the results with the American people, claiming that the decline in Biden's cognitive abilities has become "more apparent." The letter, published on Jackson's website, was signed by 13 Republican members of Congress, insisting that Biden follow the example of Trump, who excelled at the Montreal Cognitive Assessment test, conducted at the request of his political opponents and media when he was president. Trump was given the test under Jackson in 2018 and at the time scored a perfect 30 out of 30.