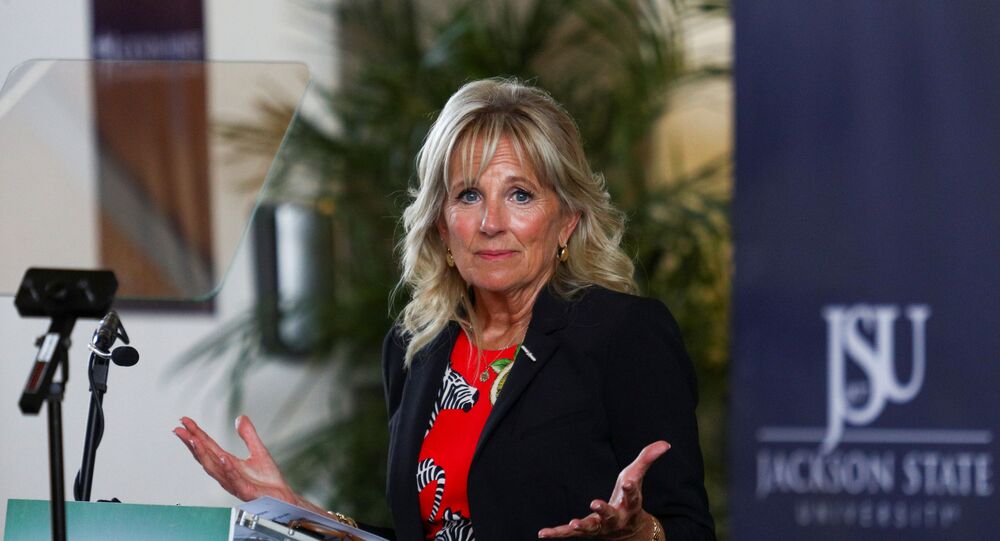 American first ladies are not rare guests on Vogue covers, with figures like Hillary Clinton, Michelle Obama, Barbara Bush, Nancy Reagan and other presidential wives starring in issues in the past. Nowadays, however, critics complain that only Democrats are permitted to become "celebrities" once elected - first ladies included.

The first lady of the United States, Jill Biden, appeared on a Vogue cover on Tuesday, anointed by the magazine as "A First Lady for All of Us". Her Vogue feature was not welcomed by all, however, as critics lashed out at the edition for featuring Biden when a former FLOTUS, Melania Trump, was never on the cover.

The new Vogue issue, apart from featuring Dr. Jill Biden on the cover, also offers an extensive profile on the first lady, sprinkled with photographs, some of which show her accompanied by the president and her grandchildren.

Even these family pics did not melt the hearts of some netizens, who blasted Vogue for "ignoring" the Trump first lady while instead favouring what some snarked as "this elderly grandma".

Sickening..and you ignored a beautiful and sophisticated First lady for this elderly grandma? Why wasn't Melania Trump on your cover? I'll never buy Vogue again! The only magazine Jill Biden should be featured in is AARP https://t.co/l3l5Sn8Bd7

Hahahahahahah. After a 4 year hiatus of not having a First Lady on the cover…I’d like to ask if you are partisan hacks too?

​Some suggested that the first lady Vogue cover choice was the result of partisanship.

No kidding. Only Democrats become celebrities once elected.

When First Ladies make the cover of VOGUE: pic.twitter.com/wgQ7A5pq5M

​Others celebrated Dr. Jill Biden's appearance in Vogue, praising her as "classy" and outlining her education and manners - and, of course, giggling about how envious Melania might feel.

Every cover she's on has to make Melania go insane.

​One user recalled that Melania Trump in fact did appear in Vogue - not, however, as a first lady, but rather as "Donald Trump's new bride" at the time.

​There is nothing unusual about Vogue featuring political figures, first ladies in particular, on its covers, as it did with Hillary Clinton, Michelle Obama, Laura Bush, Nancy Reagan, Jacqueline Kennedy and many others. But when it comes to Melania Trump, major mainstream magazines appear to have largely ignored her during her tenure as FLOTUS - which, according to some reports, angered Trump's third wife.