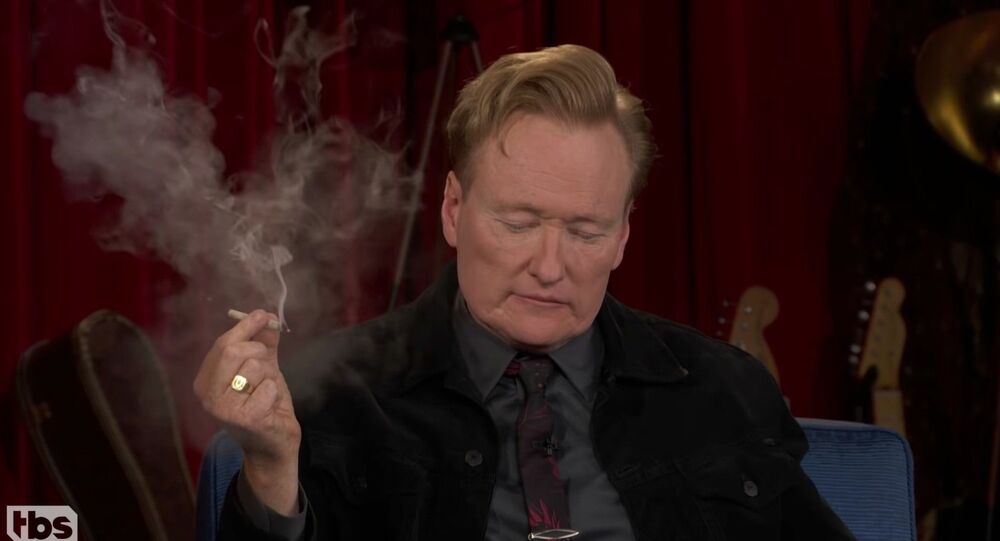 The long-time, late-night comedian is ending the run of his eponymous TBS talk show “Conan,” which debuted in 2010, to move onto further projects with the streaming platform HBO Max that will reportedly see him launch a weekly variety series.

To celebrate the show’s run, Conan O’Brien and longtime sidekick Andy Richter shared a marijuana joint with actor Seth Rogen on Tuesday night’s episode, a move that prompted a chorus of cheers and applause in the studio.

In addition to his roles in movies like “Knocked Up,” “Steve Jobs,” and “Long Shot,” Rogen is a well-known cannabis connoisseur who has founded and invested in several marijuana-related businesses.

The not-so-shocking moment with Rogen came after O’Brien admitted he would be having “a lot of free time now” that he is parting from the nightly show. After the late-night host asks Rogen how best to fill his time, Rogen responds with: “I would suggest, and this would be hilariously on brand: try smoking a lot of weed for a long time.”

Cue the laughter and applause, folks.

O’Brien quickly admitted that while he doesn’t have a “problem” with marijuana, it’s not an herb he often chooses to smoke, explaining that “the couple of times I’ve tried it, nothing really happened.”

“But, I know you own a weed company… you know me, what would you want me smoking?” O’Brien asks Rogen, who in turn immediately produces a marijuana joint from his shirt pocket that he then proceeds to offer to O’Brien.

“This is how lame I am: for a second, I thought ‘he brought a birthday candle?’” O’Brien jokes.

Before lighting the jay, O’Brien says to the crowd, “this is the kind of thing you do when you know it’s over for you.” He then proceeds to take a puff before passing it to Rogen, who takes a quick hit before passing it to O’Brien’s sidekick Richter, who also indulges.

“I’m so happy with what just happened,” a giggly, giddy Rogen later exclaims. O’Brien subsequently asks if it’s “supposed to burn,” admitting “it kinda burns in there,” referring to his throat.

Rogen later addressed the encounter on social media, acknowledging in a tweet that he “was legit terrified that I got [O’Brien] too high haha.” The actor noted that the “surreal and shocking” exchange was “genuinely unplanned.”

O’Brien merely commented that “this wasn't how I expected tonight's show to go.”

Other netizens chimed in with their mostly positive reactions to seeing the moment.

COVID-19 and 4/20: Twitter in Stitches as 'Mayor of Marijuana' Offers 'Joints for Jabs' - Photos

US Study Links Young Adults' Suicide Risk With Marijuana Use