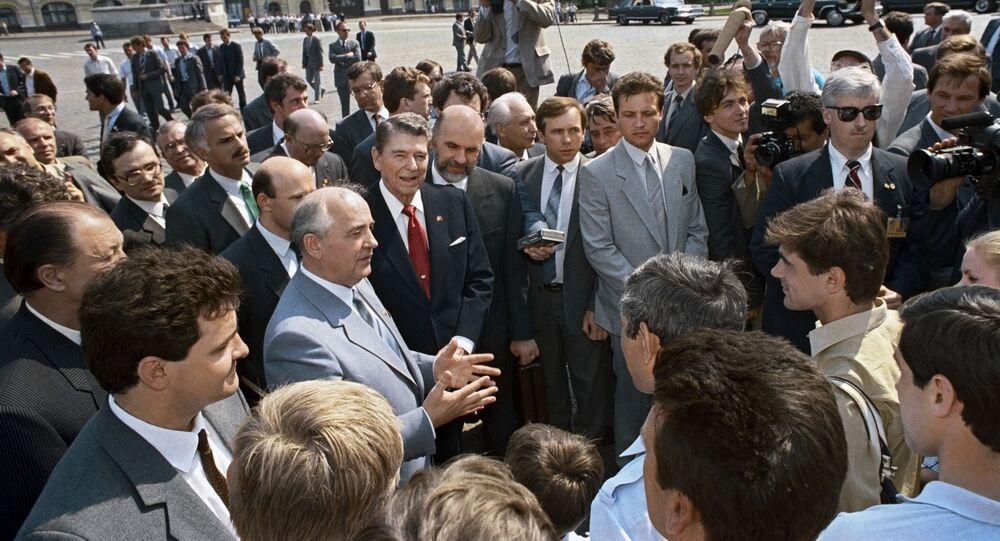 The Kremlin has long debunked the wild claim that Putin, who worked for the KGB in East Germany at the time, was ghosting US President Ronald Reagan during the latter's visit to the Red Square in 1988.

White House photographer Pete Souza stirred social media by posting his 1988 photo of US President Ronald Reagan during the latter's visit to Moscow in 1988 on his Instagram and sharing a wild theory that he might have captured would-be Russian President Vladimir Putin on the same picture. Souza explained that, around 2003, someone wrote to him wondering if a blonde tourist with a camera in the picture was a young Vladimir Putin, who worked for Soviet intelligence at the time.

"I did an interview with Steve Inskeep of NPR [in 2009]. I was telling this story as an example of how the relevance of presidential photos can change over time. 'And as soon as you see the photo you go, oh, my gosh, it really is him [Putin]' were my exact words", Souza, who was about to become US President Barack Obama's photographer at the time, shared.

© CC BY 4.0 / Office of President of Russia
Photo of Vladimir Putin from his days at KGB around the 1980s

The Kremlin was quick to react to Souza's interview with NPR, stating that it was not Putin who was captured on the photo, while not commenting on allegations of the lookalike's identity.

The White House photographer, however, has his own view of who the man might be. Souza recalled in the same 2009 interview that tourists that Reagan met during the 1988 Red Square visit were asking "pointed questions" about the issues that the US faced at the time. When he commented on that in a conversation with a Secret Service agent accompanying Reagan, the latter alleged that those were not the real tourists but "KGB families".

Even taking the Secret Service agent's allegation into consideration, it's hard to imagine Putin being at the Red Square on that day in 1988, since between 1985 and 1990 he worked in Dresden, East Germany, for the KGB. It is unlikely that the Soviet agency lacked enough field agents to pull one from Germany to monitor Reagan's movements.

From KGB Building to Favorite Restaurant: Tour Around 'Putin's Spots' in Germany