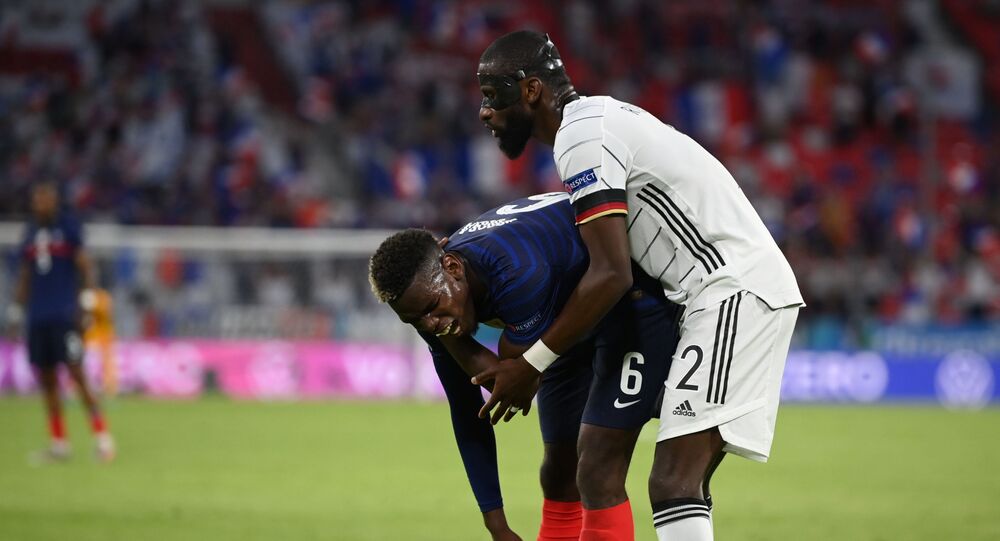 The national teams of France and Germany clashed swords in Munich during one of the Group F matches of Euro 2020 on Tuesday, with the current world champions defeating Germany 1-0.

The Tuesday football match between the teams of France and Germany saw many memorable moments, but netizens turned out to be particularly amused by several seconds in which it appeared that German footballer Antonio Rudiger tried to bite a French player, Paul Pogba.

In videos shared by netizens online, Rudiger is seen approaching the French footballer from the back, then standing very close and apparently touching Pogba's shirt with his face. The way Rudiger's mouth was opened has prompted many to think that the German player was actually biting his rival.

Others doubted that this was the case, but still noted that the behaviour of Rudiger was, to say the least, bizarre.

​Some jokingly dubbed the interaction "foreplay", smirking because of how uncomfortable the whole thing was for them to watch.

Not sure if that's a bite, but rather bizarrely, its a nipple tweak pic.twitter.com/uhvxA1crOg

So do UEFA just ignore this or…? If this was Suarez he’d get that lifetime ban 😂

​Apart from whatever Rudiger's move really was, the Tuesday match was memorable, since it was the first time in history that Germany lost in the first Euro championship game, with defender Mats Hummels unluckily performing an "own goal".

The game ended with the score 1-0. Having won the match, France will face off Portugal on 23 June.

Pogba is Not Trying to Force His Way Out of Club and is Focused on United, Says Solskjaer