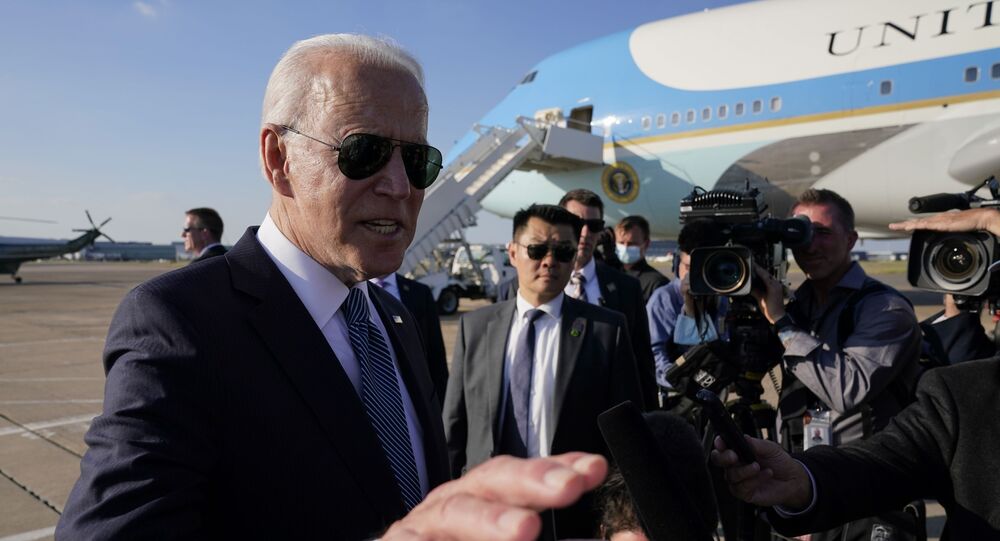 What may be yet another gaffe on the part of the 46th US president may in fact reflect the United States' overall approach to the MENA region, where, as many netizens have suggested, the US has created a lot of disorder and chaos, not in line with what their officially declared objectives are in the region.

The G7 summit on Sunday has been marked by yet another embarrassing mixup, thanks to US President Joe Biden, who wasn't sure which country he was speaking about — Libya or Syria.

Since 2011, both countries have been engulfed in civil wars in the wake of Arab Spring uprisings that rocked the region, with demonstrators demanding political and socio-economic reforms.

​Netizens were left unamused, however, as this is not the first time Biden has had trouble remembering names or loc, and also because his gaffe this time can be considered symbolic — demonstrating probable ignorance or even lack of concern on the part of Washington about significant issues, or perhaps it reveals how American policy towards these two countries has not differed much. This is what many users have suggested.

Also because they tried to do in Sirya what they did on Lybia.

But no more. With Lybia they tricked the world. But no more
🙏☀️

They’re all the same to him anyways, just expendable, exploitable people in the way of his party’s goals towards regional dominance.

Will he bomb the wrong country or both just in case?

He is lost without his Teleprompter. Note cards did not save him.

Biden also took a moment to criticize Russia over allegedly failing to provide assistance to the Syrian people — which is rather debatable, since the Russian forces were deployed to Syria upon the request of its President Bashar Assad, in order to help restore order in the country that was crumbling as Daesh* and other militant groups were extending its control in the region at an alarming pace.

One user tweeted with bitter sarcasm, "Biden confuses Syria-Libya three times. He also appears to boast that Russia's inability to 'provid[e] for the basic economic needs of people' in Syria is a point of US leverage. I assume he means the US sanctions that, like Biden, US media won't mention."

What he forgot to mention is that the US military presence in the Arab Republic was neither asked for nor approved by the official Syrian government, which clearly makes it illegal. Concerning the US role in the Syrian conflict, the Russian Foreign Minister Sergey Lavrov also said that the United States support destabilizing forces in the country, which does not contribute to peace in the region, while their presence "is accompanied by the plundering of the natural resources of the Syrian Arab Republic."

As for Libya, in 2011, the US-led NATO military intervention helped toppled then-leader Muammar Gaddafi, who was later murdered by rebel fighters. After that, the country was divided between two opposing governments.