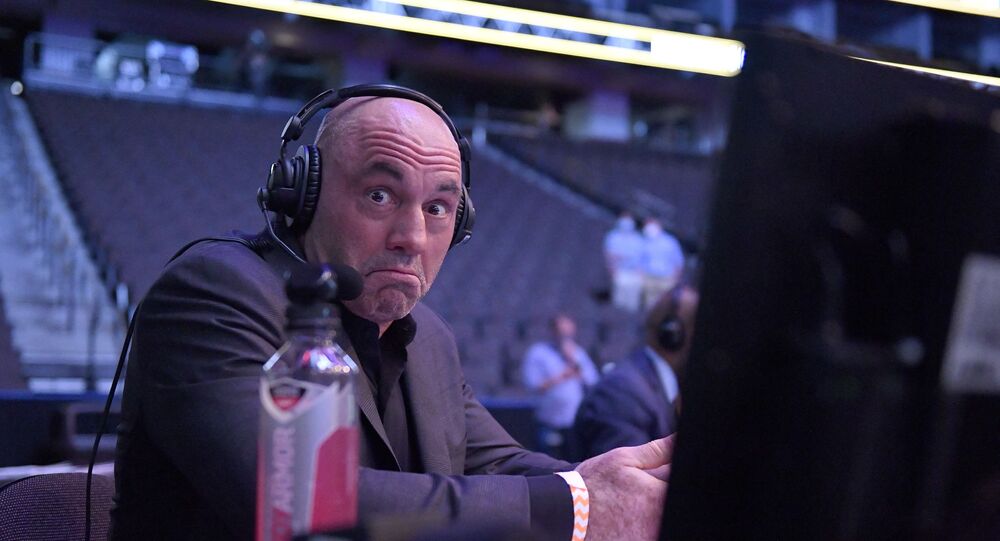 The host of one the most popular podcasts in the world has recently entered the media spotlight after suggesting that young and healthy people should not get vaccinated against COVID-19. The remark prompted widespread criticism from scientists, who said that everyone over 16 should get a jab in order to stop the spread of the disease.

A man spent more than $17,000 to write a marriage proposal in the sky and diss famous TV and podcast host Joe Rogan, The Wrap has reported. According to the outlet, earlier this week people in Los Angeles noticed several messages written in the sky. First residents of LA saw: "Will you marry me Mollie Pratt?"

"Will you marry me Mollie Pratt" "She said YES". The first half. pic.twitter.com/z7eUG2DU4Q

​Then after the girl apparently agreed, the following messages appeared in the sky: "She said yes! I love you more than anything. Excited to spend my life with you. Until death do us part".

Look what someone wrote outside my house today. Thanks @jason! pic.twitter.com/wiLh0Yc8Nt

​These messages alone would be enough to become one of the most original marriage proposals, but the lucky bridegroom decided that something was missing…

There was more and it took a weird turn. pic.twitter.com/uPRp6dnTGw

​According to The Wrap, which cited the company Sky Typers, the man paid $17,500 for ten messages total.

What's the big deal if someone is 5'3"? Is that bad or something? I wonder what the motivation was for writing that....?

Isn’t it right to belittle someone for something they can’t control?

​Even critics of Rogan criticised the lovestruck man.

Don't really like Rogan but why is it ok to demean a guys height.

​Others deemed that Rogan was much taller.

Joe is a lot of things but taller than 5'3 is not one of them.

​Many netizens imagined how the podcast host would react to the news.

Joe Rogan when he sees someone wrote he's literally 5’3 in the sky pic.twitter.com/j58CKN9uTB

Joe Rogan when he finds the guy who had a plane sky write Joe Rogan is 5’3” pic.twitter.com/0mABtsNzsZ

Yet others said the person should have used skywritten messages to speak about more important issues.

If Californians cared as much about state politicians and forest management, as they do Joe Rogan, it'd be a decent place to live.

Confident he would not care. Should have donated the money to charity. Would have had a far more significant impact than some virtue signalling re-tweets from an echo chamber.

​Some drew attention to the pilot misspelling the word literally, missing the R.

I hope he got a discount because the sky writer spelled literally wrong. pic.twitter.com/mfIdfIpavO

​One user posted a picture showing that the pilot fixed the mistake.

They fixed the typo in their second attempt: pic.twitter.com/cibtpSlOOX

​This is not the first time that people have made fun of Rogan's height. In 2015, someone edited a page on Wikipedia, claiming he was 5 feet. Later Rogan, who has 7.3 million followers on Twitter and 12.7 on Instagram, wrote that his height is 5'8.

@codymfhurst @JoeyStats707 It's people being changing wikipedia because we were joking around about it. I'm short, but not that short 5' 8"