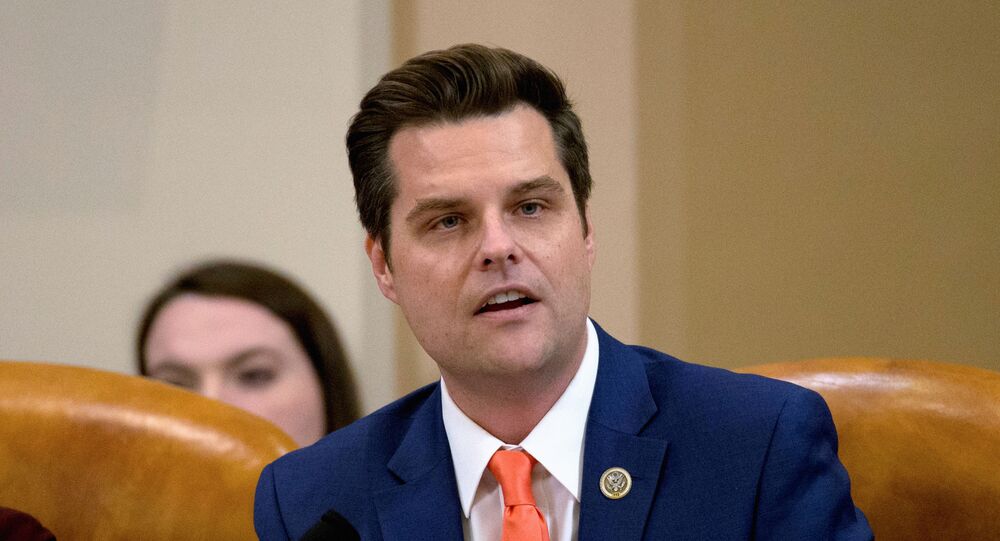 Lee Harvey Oswald, who served as a US Marine, is the only official suspect in the assassination of the 35th American president, John F. Kennedy, on 22 November 1963.

A US GOP representative from Florida, Matt Gaetz, on Monday landed in hot water after retweeting an image of who he apparently believed was someone's "veteran" grandfather. In fact, the image was of Lee Harvey Oswald, a former US Marine and the only suspect in the assassination of US President John F. Kennedy.

Gaetz was quick to delete the post after the backlash, but the Internet will now always remember his sharing of a picture from an account ironically named "matt gaetz is a pedo", referring to allegations that the Republican representative is involved in the sex trafficking of a minor girl.

The owner of the account was quick to rename it "Ken", but viral screenshots still show Gaetz's retweet of Oswald's picture from a profile with the "pedo" name.

In their mockery of the Florida lawmaker, netizens were merciless, ridiculing how Gaetz apparently did not see the account name when he reposted the image.

How can he have that much forehead and that little brain?

The “matt gaetz is a pedo” handle wasn’t a tip off? Gaetz is an idiot.

Seeing Matt Gaetz and Matt Schlapp retweet a picture of Lee Harvey Oswald on Memorial Day makes twitter worthwhile, then again, they would probably be supporting him. pic.twitter.com/i9QhZVe8g7

I was wondering why Lee Harvey Oswald was trending. Looks like @kenklippenstein decided to give some MAGAs a military history quiz on Memorial Day. Naturally, Matt Gaetz failed. Great tribute to the worst Marine in history, @mattgaetz pic.twitter.com/ZVaGnFgb8h

​​Even the author of the retweeted post, now inoffensively named Ken, ridiculed how the name of Kennedy's killer hit the Twitter trends after Gaetz appeared to hype it up.

​Users also laughed at how Gaetz was not the only one to retweet the image, a move also made by the American Conservative Union chair, Matt Schlapp.

Seeing Matt Gaetz and Matt Schlapp retweet a picture of Lee Harvey Oswald on Memorial Day makes twitter worthwhile, then again, they would probably be supporting him. pic.twitter.com/i9QhZVe8g7

Lmmfao @ Ken getting both these dopes to retweet Lee Harvey Oswald. I hope this long weekend never ends! pic.twitter.com/cC0Dj5HToZ

​Gaetz, who currently faces allegations of the sex trafficking of minor girls, has denied the claims, stating that he has "never had sex with a minor and has never paid for sex."