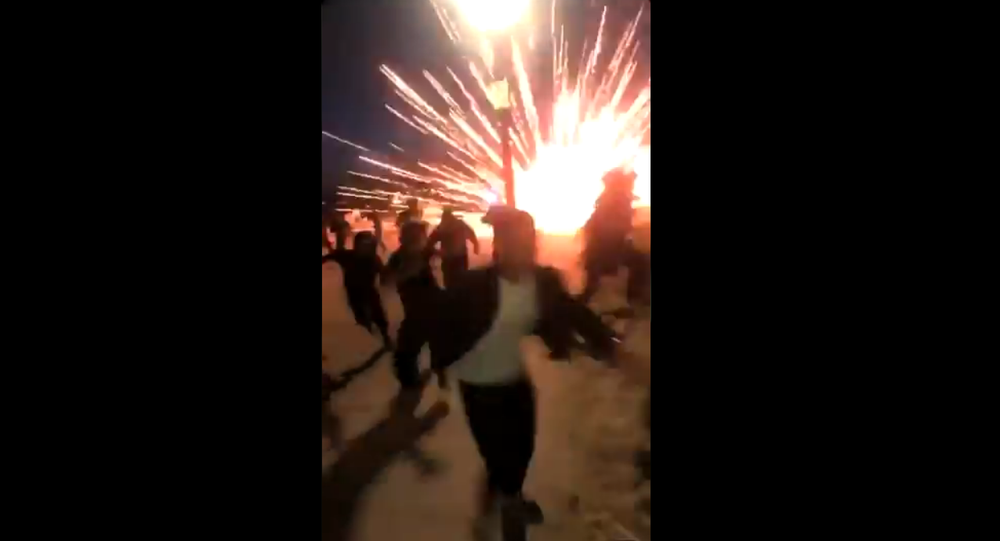 A viral event in California attracted thousands of TikTok users, but they appeared to not be the only guests at the party, as Huntington Beach police officers happened to come by as well.

A birthday celebration in California's Huntington Beach evolved into a massive viral event on Friday and Saturday and resulted in over a hundred arrests, NBC Los Angeles reported.

Among those arrested, according to a police spokesperson Jennifer Carey, cited by NBC, were 121 adults and 28 juveniles, facing a variety of charges, from vandalism to the use of illegal fireworks and curfew violation.

Originally, the party was dubbed "Adrian's Kickback", with a user under the name of adrian.lopez517 inviting everyone on TikTok to "pop out n celebrate my bday". The post went viral throughout the week, inspired a hashtag and resulted in what Huntington Beach police classified as an "unlawful assembly" and "large gatherings".

The Huntington Beach Police Department tweeted a warning for potential participants of the gathering, noting that alcohol and illegal drugs on the beach are prohibited, as are fireworks.

"The safety & well-being of our residents, visitors, businesses & motorists is paramount, which is why the Huntington Beach Police Department (HBPD) is taking significant steps to prepare for the potential influx of visitors, including working closely with our regional public safety partners. Toward that end, the HBPD will also be strictly enforcing all applicable laws & ordinances throughout the weekend", police said.

Unlawful assembly has been declared in #HuntingtonBeach due to unruly crowds. An emergency curfew has been put into place effective 5/22 at 11:30pm through 5/23 at 5:30am for all individuals within the downtown area.

​One of the videos from the party shared on TikTok showed people climbing up the flagpoles, gathering in large crowds and cheering to music.

​The event prompted a wave of memes on social media, along with footage showing people launching fireworks despite the police ban, flashing lights and people running away from cops.

kinda wishing I was at Adrian’s kickback right now
(snap maps is a great feature for fomo) pic.twitter.com/fCJEalrQFg

Me n the homies on our way to Adrian’s kickback pic.twitter.com/ndzfYF2Cke

huntington PD is treating the kids at "adrian's kickback" worse than the LITERAL KKK RALLY IN THAT SAME PLACE pic.twitter.com/SL2xcswxCl

​Huntington Beach police have not released any official statement with regard to the reported arrests made at the 'Adrian's Kickback' party.