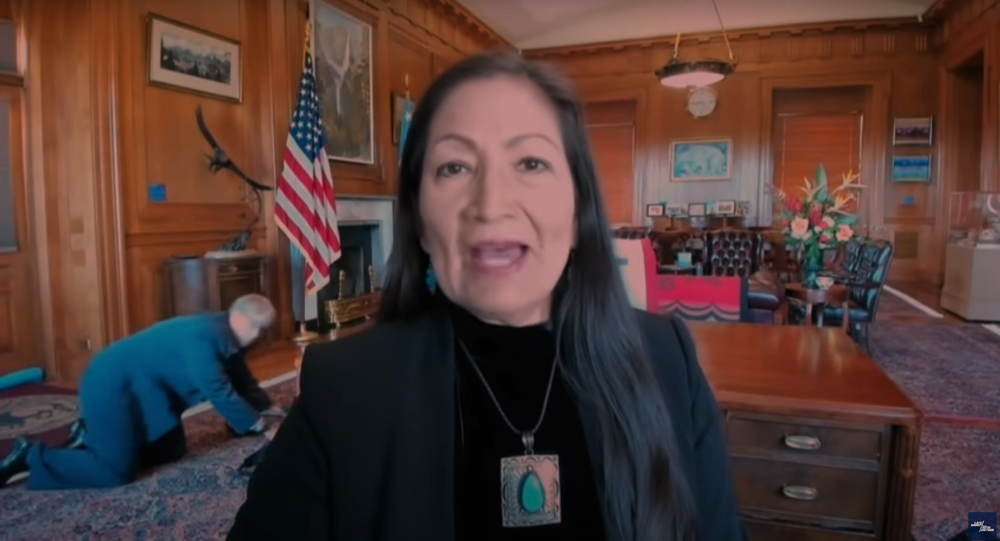 Deb Haaland became the first Native American woman to be confirmed as US Secretary of the Interior. Tapped by Biden on December 17, 2020, to hold the position, Haaland was confirmed on 15 March.

As US Interior Secretary Deb Haaland was speaking to TV host Seth Meyers for his "Late Night with Seth Meyers" show, some 'sneakery' was happening behind her back.

While Haaland was speaking about her experience as the first Native American woman on her post and her emotions whilwe Vice President Kamala Harris swore her in to office, her staffer could be seen crawling on the floor in an attempt not to disrupt the interview. Meyers, however, was quick to notice him.

“You have a staffer who fully crawled on the carpet behind you — and it is the greatest thing I have ever seen", Meyers added with a grin, immediately adding: “Sir, we know you’re behind the desk.”

As Meyer's was saying that, the man - who appears to be Haaland's photographer - proceeded to hide behind the desk on his knees with a camera in his hands. He then exited the frame, leaving Meyers and Haaland giggling.

“Now, Secretary, be honest,”  Meyers went on. “Do you know who that man is and are those someone else’s glasses he’s wearing?”. Laughing, Haaland responded: “We don’t have people sort of sneaking around, so, yes, I know who that is.”

She then thanked Meyers for "making light of it". The host argued that he should be thanking her, instead, for a potentially viral comedic moment that the photographer appeared to create for the show.

The "sneakery", as Meyers put it later in his tweet, prompted some giggles online, with netizens suggesting that the awkward cameraman might soon discover himself memeficated.

it was really funny, did he ever become a meme? 🤣

​Apparently, they were not wrong.

​Others suggested ways Haaland could have made it funnier.

She should have been like, “No, never seen him before in my life!” 🤣🤣🤣

​Deb Haaland, the first Native American woman to hold the position of US Secretary of the Interior, was confirmed on 15 March.