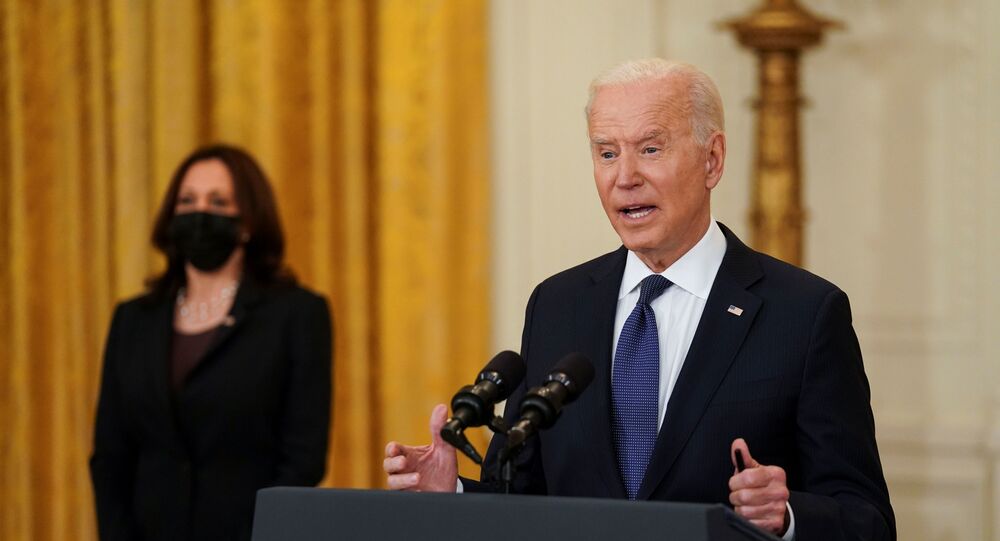 In late March, Joe Biden unveiled a hefty $2 trillion infrastructure and jobs package aimed at reinvigorating the US economy.

US President Joe Biden mistakenly said in a recent White House speech that five former leaders of the Federal Reserve had declared that the POTUS’ American Jobs Plan proposal “is going to grow” the country’s economy, CNN reports.

The $2 trillion blueprint, which was rolled out on 31 March, stipulates a hike in corporate taxes from 21 percent to 28 percent, among other things, and to spend more on an array of infrastructure projects and other initiatives.

What’s more, the ex-IRS commissioners said nothing about economic growth, noting instead that Biden's American Jobs Plan would make the tax administration system "far fairer and more effective" and "produce a great deal of revenue by reducing the enormous gap between taxes legally owed and taxes actually paid”, according to the US news network.

CNN also claimed that Biden was wrong when he argued in separate remarks last week that the economic firm Moody's Analytics had found that the Infrastructure Plan would create up to 16 million more jobs in the US.

The news outlet insisted that in reality, Moody's calculated that the passage of the plan would produce about 2.7 million additional jobs rather than 16 million.

Many Twitter users have, meanwhile, quipped at Biden’s most recent attempt to defend himself against critics, who argued that the expanded unemployment benefits offered in the COVID-19 relief bill passed in March were stopping Americans from taking new jobs.

The POTUS and his party do not understand or acknowledge incentive structures. This is why the American people should not entrust them with economic policy.

Blah blah blah. So what what he says. States like Maryland will never enforce it. People aren’t going back to work until September. Watch the stock market crumble as Biden spends $2 trillion on a jobs bill while nobody works. How do you F up an economy in six months? Elect Biden.

Well then he's an idiot. If you pay people more $$ to NOT work than to work they have been incentivized to NOT work and most will continue to do so until the opposite is true. It's not rocket science.

I wonder what the policy will define as "suitable"?

Define 'suitable' in terms of employment please. It'll be a different context for everyone. Good luck with that.

Why doesn't Biden retire already? We all know the president is mostly a ceremonial position. Biden's presidency is looking like Trump's. Democracy is an illusion.

“The POTUS and his party do not understand or acknowledge incentive structures. This is why the American people should not entrust them with economic policy”, one user asserted.

© REUTERS / ERIN SCOTT
Biden Says US Has 'Long Way to Go' Despite Huge Jobs Creation in His First 2 Months
Biden earlier touted the COVID-19 relief plan as “historic” and capable of "rebuilding the backbone" of the nation, while also giving working people "a fighting chance".

The nearly $2 trillion bill, signed on 11 March, provides a one-time $1,400 paycheck for US citizens making less than $75,000 a year and married couples that make less than $150,000. The legislation was adopted after the US economy shrank 3.5% in 2020 due to the restrictive measures imposed to contain the coronavirus pandemic, something that saw millions of Americans lose their jobs.

New Era? China May Overtake US as Largest Economy in Near Future, Report Suggests