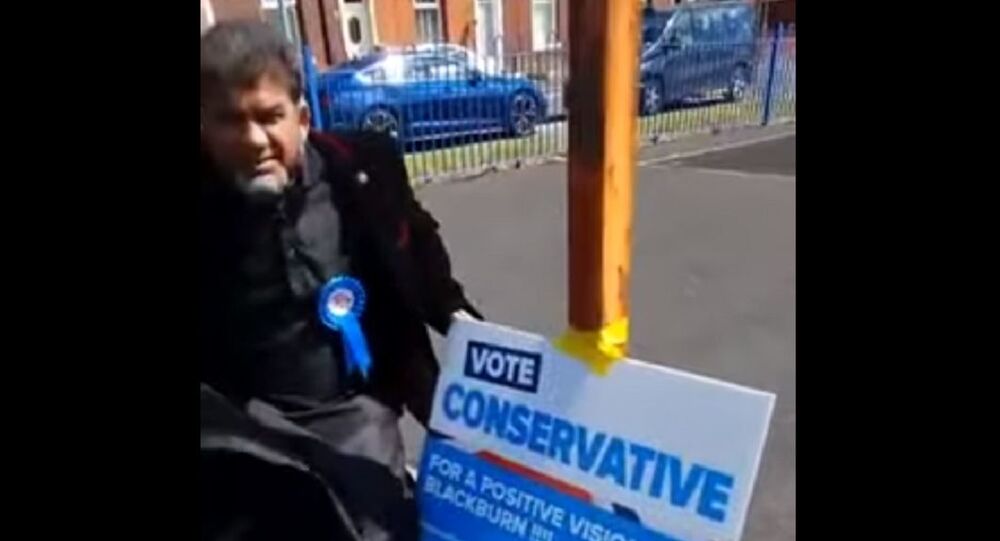 The Conservative candidate for Audley and Queen’s Park ward in northwest England has been highly critical of Labour politicians governing the area. The man has expressed all his frustration in a series of short clips – some of them more telling than others.

Tory candidate for Audley and Queen’s Park ward Tiger Patel has left the online crowd in stitches with his viral campaign video, which features him walking around a blighted local playground pointing out its problems, including some X-rated content.

The clip shows Patel, who says he has been dubbed “the BoJo of Blackburn”  by local supporters, posing at the top of a slide where graffiti of a penis and the word “suck” have been scribbled, just behind his own designated area.

​The moment looked iconic, as the politician raises his hands in the air and makes peace gestures, all while looking straight to the camera. The chairman of the Blackburn Conservative Association, Julian Arnold, says his colleague’s placement was not intentional but quite telling:

“At the end of the day, when Tiger did the video, he didn’t notice the fruity graffiti, but that says it all for us,” Arnold told the PA news agency.

“That’s what’s happening: these community facilities are being vandalised, are being wrecked, and the graffiti says it all – little kids play on there.”

According to Arnold, Patel is really a “big character” in the area “like Boris”.

Mr. Patel, who previously ran as an independent, said he has been inspired by the UK’s Conservative prime minister to join the Tory ranks for the ward’s election over his growing dissatisfaction with local Labour rulers and their alleged blindness to the issues facing the area.

“I’m inspired by Boris Johnson”, Patel had told PA. “He’s popular, and I’m also popular in Blackburn. Somebody said I was the BoJo of Blackburn.”

Unsurprisingly, the candidate’s silent walk, which features some traditional Indian music in the background, and his pose next to the scribbled genitalia in the clip, grabbed more attention from the viewers than the playground’s damaged equipment, which Patel had hoped to highlight. “I guess this is his manifesto”, one social media user quipped.

And the placement is perfect 🤣🤣🤣🤣

That’s the shot right there. Thought it was a parody I have to say.....

I was hoping that he’d at least exit via the slide.

I guess this is his manifesto