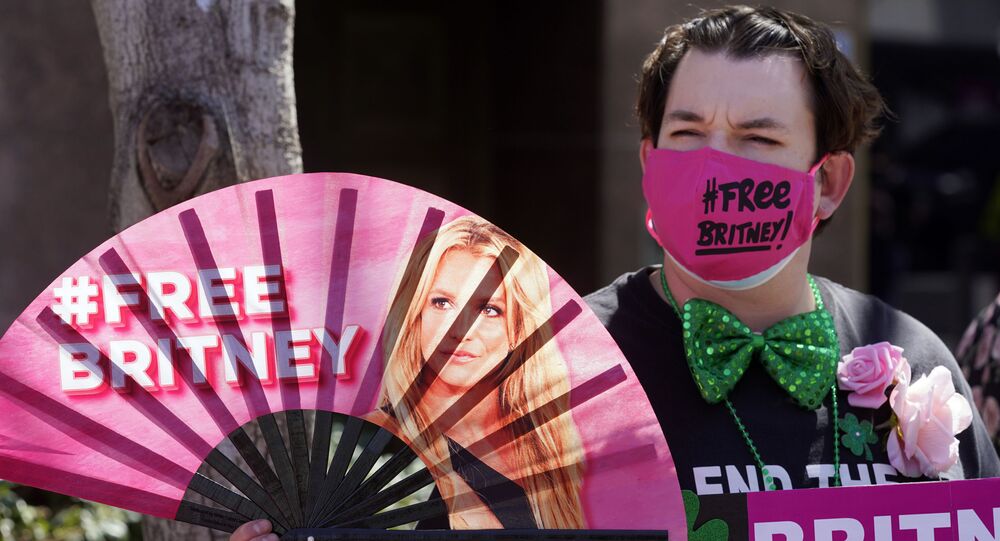 The "Princess of Pop" has been under the conservatorship of her father Jamie Spears for almost 13 years now following a series of mental breakdowns after her divorce from Kevin Federline and custody battle over their children. Through lawyers, 39-year-old Spears is now seeking to remove her dad from overseeing her life and finances

Britney Spears might have been diagnosed with “dementia” by her conservators to justify taking control of her finances, a new documentary suggests, citing claims from the star’s fans and paperwork detailing the conservatorship that's circulating online.

BBC journalist Mobeen Azhar flew to Los Angeles as a part of the documentary titled "The Battle for Britney: Fans, Cash, and a Conservatorship" to investigate claims surrounding the viral #FreeBritney campaign, and an apparent arrangement preventing the singer from making important life decisions on her own.

Azhar spoke to one of Spears’ devoted fans Hayley Herms, who is campaigning for the musician’s conservatorship to be removed:

"To me it's like Britney is in jail,” Hayley is quoted as saying in the doc. “Not being able to talk to your friends, not being able to have the internet, your phone, she can't even make a phone call by herself."

The fan then made a bombshell claim that left the journalist visibly shocked.

"And I believe there's doctors out there – this is my personal opinion, I don't want to get anyone sued, this is not out there legally – that are being paid off, for example, they have her on medication for dementia,” Hayley said.

According to the campaigner though, the purported diagnosis was fake.

"I've seen dementia and there's no way any dementia patient is going on world tours, doing Vegas residencies, is learning 27 back-to-back combo numbers, full choreo[graphy]. No honey, that is not happening,” she concluded.

Azhar researched the “conspiracy theory” and came across some paperwork online that netizens from fandom websites claim explains the singer’s “dementia” diagnosis by her conservators.

I don’t know how anyone could think Britney Spears has Dementia. She has been able to memorize lines, songs, and choreography for YEARS! #FreeBritney #FreeBritneyNOW

The reason for Britney Spears’ conservatorship was indicated by her father Jamie on the documents as ‘dementia’. Britney Spears does not suffer from dementia. #FreeBritney pic.twitter.com/fyhWUs55Rl

The BAFTA award-winning journalist says there's "no way of knowing if these [documents] are legit, but this looks like it's linked to the conservatorship," while apparently referencing Britney's dad and co-conservator James Spears.

"On the second page, there's a page where you have to tick a box, essentially justifying the reason for the conservatorship, and the box that's ticked says 'the order relates to dementia placement or treatment as specified,'" Azhar says.

"So there's only two options with that. Britney might have dementia. Now I'm not a doctor, but if that's the case, the world isn't aware of that."

‘They Don’t Known Anything’

Britney Spears' father and legal team have never publicly spoken about a “dementia” diagnosis, but her family have long-insisted that the conservatorship installed in 2008 after the singer’s rehab treatment and umbrella attack on the paparazzi was “the right choice.”

In August 2020, Jamie Spears decried the “conspiracy theorists” behind the #FreeBritney campaign, saying they “don’t know anything” about his family’s situation.

Under the arrangement, the star is unable to vote, drive a car, or spend money without her father’s consent – her fans and #FreeBritney campaigners say her existence is like a “jail term" as a result. The hashtag campaign has been picked up by a number of celebs, including Miley Cyrus and Bella Thorne, who have spoken out in in Britney's defence.

The singer’s attorney Samuel D. Ingham III filed a petition in March for the L.A. County Superior Court Judge Brenda Penny to remove Jamie Spears' power to control the singer’s “person” and estate, while he's already been downgraded to her co-conservator alongside the Bessemer Trust bank. Judge Penny had previously refused to remove him from the settlement altogether and assign manager Jodi Montgomery as her Britney's sole permanent conservator as per the lawyer’s request.

The "Baby One More Time" singer is due in court on 23 June for the first time to speak about her conservatorship. It's believed that she'll fight to get her dad removed from overseeing her finances.

Meanwhile, Spears' parents have also waged war against each other over the conservatorship fees, making the situation even messier for the legendary pop singer.