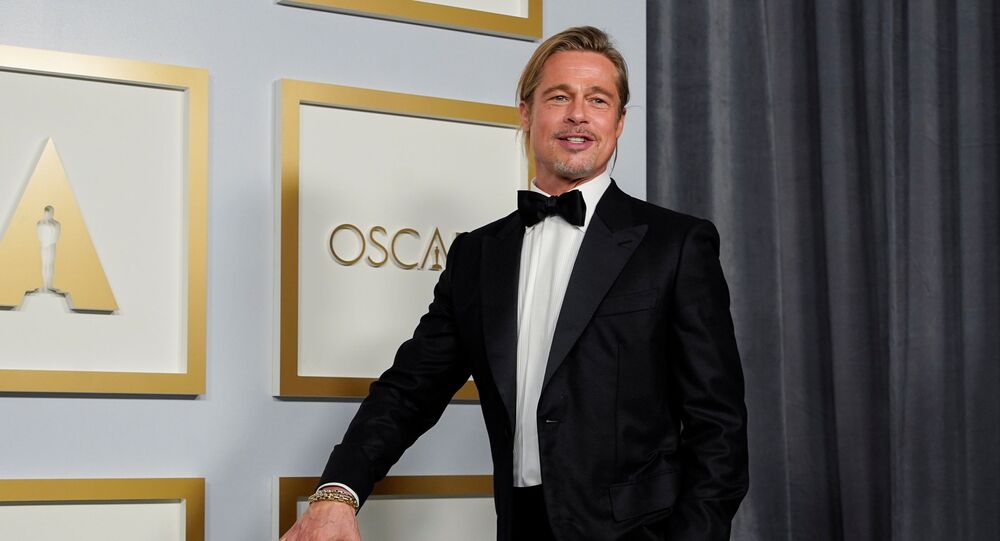 'Fine as F**k': Brad Pitt Steals Hearts of Netizens With His Man Bun at 2021 Oscars

The star of "Once Upon a Time in Hollywood" skipped the red carpet and appeared on stage to present the award for Best Supporting Actress. The Hollywood heartthrob seemed surprised when he announced the winner Yuh-Jung Youn, who played in the movie he produced.

The 93rd Academy Awards have drawn to a close with several surprise victories - Best Director went to Chloe Zhao, the first woman of colour to win an Oscar in this category, while Sir Anthony Hopkins won Best Actor, which many expected to go to the late Chadwick Boseman. However, for many viewers the biggest surprise was Brad Pitt's new hairstyle.
The 57-year-old appeared in a black tuxedo and a bow tie with his long hair tucked into a bun.

Imagine looking this sexy with a man bun and a mask. Only Brad Pitt 🔥 pic.twitter.com/oXsL4L7Aup

​Social media users were left enchanted by Pitt's look and lauded his hairstyle.

I did a hair mask in the shower today, took a “glow” vitamin, and I still don't think my hair looks as nice and shiny as Brad Pitt's low key man bun.

​One user even contended that Pitt deserves an award for his beauty.

"Brad Pitt deserves an Oscar for still being fine as f**k", read the post.

Many users noted that the actor doesn't look his age.

​Others contended that they prefer his other hairstyles.

He looks better with other hairstyles, but still, he never looks bad to me!!

That man bun has to go

​Some netizens said that Yuh-Jung Youn, who won the award in the category Best Supporting Actress was bewitched by Pitt's looks and started flirting with him.

How much of a badass is Youn Yuh-Jung that she gets up on stage to accept her #Oscar and immediately starts flirting with Brad Pitt.

When you win the Oscar but the only thing you care about is having met Brad Pitt #Oscars2021 pic.twitter.com/PvF0R8HuJ6

​During her acceptance speech Yuh-Jung Youn, who became the first South Korean actress to win an Oscar, thanked Pitt for pronouncing her name correctly and said she was happy to finally meet the actor.

This would be us if we met Brad Pitt #Oscars pic.twitter.com/Wc7aMsgJ6E

​This is not the first time that Brad Pitt has caused a stir during the Oscars. Last year, the actor made headlines when he made a joke about Donald Trump's first impeachment trial and got emotional while accepting the award for Best Supporting Actor.