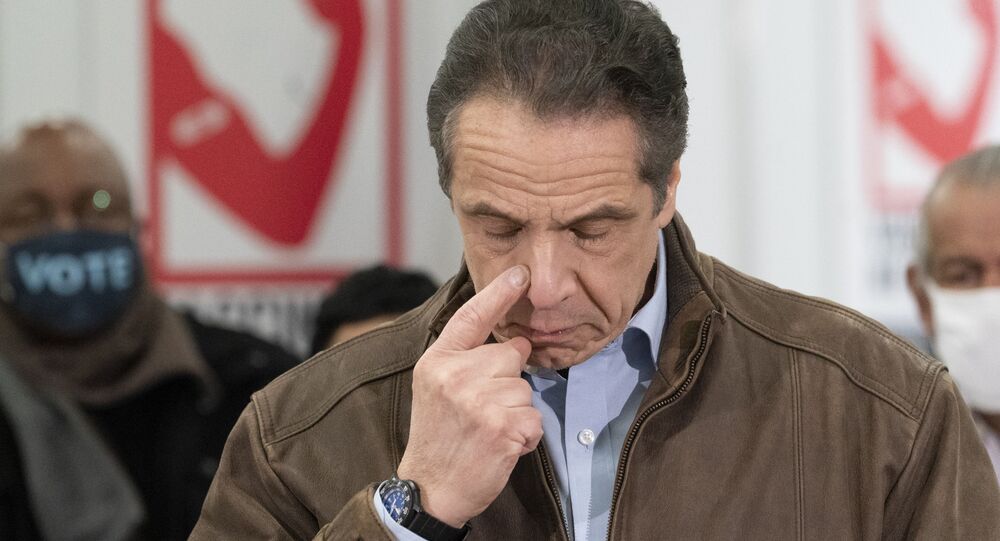 New York Governor Andrew Cuomo has encountered multiple accusations of sexual harassment from several women, including ex-employees of his administration. Facing backlash and calls for resignation, he continues to deny the accusations.

New York's slogan "NY Tough" that is usually displayed on an Albany skyscraper appeared to have been changed to "NY touch" briefly on Saturday, according to a photo tweeted by News 10 reporter Trishna Begam.

"A different message tonight on the Corning Tower in Albany as seen from the News10 parking lot around 8pm", she captioned the tweet, posting a photo showing "NY touch" illuminated on the building, with a shape of a heart lower.

According to the reporter, the lines were changed back to "NY Tough" - the Cuomo administration's slogan, adopted during the raging coronavirus pandemic, around 8:24 p.m., local time.

A different message tonight on the Corning Tower in Albany as seen from the News10 parking lot around 8pm pic.twitter.com/p1RelbtFwg

​The altered message was seen by many as an apparent shot at New York Governor Andrew Cuomo, who faces multiple accusations of sexual harassment, including groping, from several women, many of whom are former staffers.

Lindsey Boylan, who was the first to come forward with accusations of sexual harassment by making her story public, reacted to the changed slogan, along with many other users.

​Her hashtag immediately went viral. A time lapse video appeared online showing how the message appeared on the Albany skyscraper as daylight faded.

For those wondering about #touchgate, here’s time lapse from our sky cam on it. pic.twitter.com/voqoQBWIwL

​Calls for Cuomo to resign intensified as images of the "NY touch" display emerged, taken from different angles.

Apparently, someone was thoughtful enough to change the "NY TOUGH" message on the Corning Tower to a message that gives some much deserved recognition to Andrew Cuomo for being such a hands on governor. #NYTouch #AndrewCuomo pic.twitter.com/WRoWxyVOv1

it's all kind of pathetic. Albany/NY Media and legislature seems to have stopped maturity at age 12.

​As he faces accusations of harassment, Cuomo continues to insist that he “never touched anyone inappropriately" and calls for the public not to make judgement until the review into the allegations is completed.