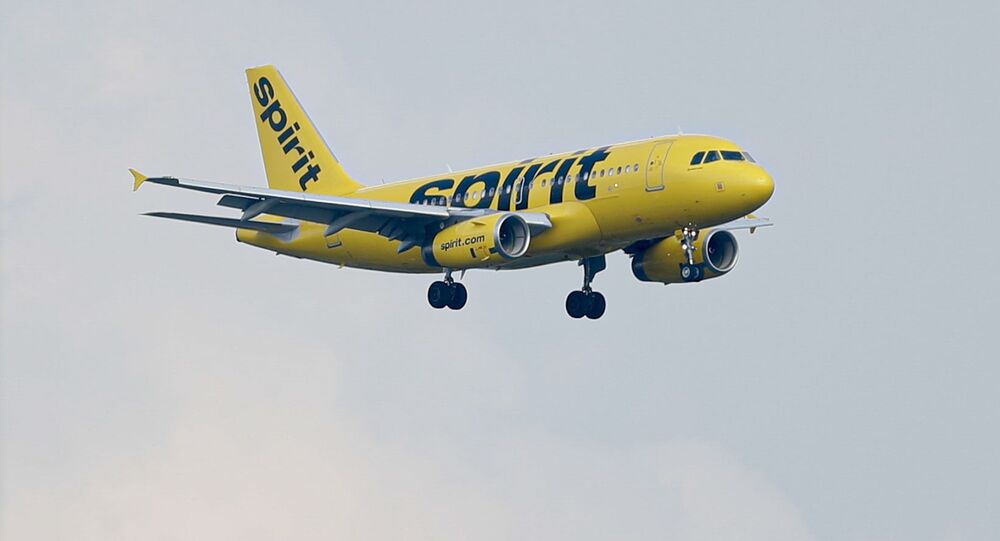 Cocktail of Racism, Anti-Semitism & Covid-ism Accusations After Family Gets Kicked Off US Flight

Spirit Airlines have been under a siege of disapproval, following an incident that saw all passengers on a domestic flight deplaned and then allowed to board back on the aircraft.

American low-cost airline carrier has emerged at the center of a scandal with anti-Semitic and racial undertones, when it kicked out a family of Orthodox Jews off a flight over “non-compliance with the federal mask mandate.”

Videos of the incident that have gone viral on social media since 5 April show the Spirit Airlines flight attendant approaching a couple, flying with their two children aged 2 and 7, and asking them to get off the plane. The two-year old is seen sitting on her pregnant mother’s lap and eating a yogurt, while not wearing a mask. The couple, Ari and Avital Eisenberg, who were also traveling with their 7-year-old special needs child, argued that they were both wearing masks and their toddler has just turned two.

NEW - Family is being thrown off a @SpiritAirlines flight from Orlando to NY because their two-year-old child is eating without a mask.pic.twitter.com/dOIZrbbJt6

​As a result of the decision by the airlines staff, the family and the whole flight from Orlando to Atlantic City was briefly deplaned.

The incident prompted the wrath of social media users, who rushed to condemn the airline’s actions and likened them to treatment of Jewish families under the Nazi regime.

In response to the statement by the Sprit Airlines, commentators also brought up the issue of anti-Semitism and judged the behaviour of the flight attendant who forced the Eisenberg family off the plane.

​Viewers were also puzzled as to how the child was expected to eat with her mask on.

I kept wondering why no one was pointing that out. The child was eating yogurt. The parents said they've been working with their child, helping her get used to the mask.Then the flight attendant says, "she's not wearing it now"
Umm, how was she supposed to eat through a mask? 🙄

​Another video of Ari Eisenberg, as the family gets up to leave the plane, shows his suggesting the whole incident was premediated:

“A lady over here heard someone on the phone before we even got on the plane, that they were planning this. The captain was OK with it, the whole plane was OK with it but there was one African-American who was not OK with it…” he said.

​His comment did not go unnoticed, as the social media erupted in another furious mass of condemnation – this time stressing the racist undertone of his remark. Twitter users questioned Eisenberg’s reasoning behind “bringing race into it”.

“He said African American like the person was a exotic animal. That's how these suspected W.S. look at us as exotic beasts. He didn't even say person. The race of the person is irrelevant,” a commentator argued.

A whole different debate unravelled around the fact that while talking to the flight attendant, Ari Eisenberg is seen pulling the mask down and back up, which goes against the regulations in place.

“The guy speaks removing his mask, the woman also removes her mask, the child might be infected with no symptoms. Nobody knows who is infected. Nobody!  To me, the flight attendant was right. She is taking care of a plane full of passengers. She was very responsible,” a Twitter comment, similar to dozens of others, read.

Even though the family and all passengers have eventually boarded the plane and the flight took off to the scheduled destination, the flight attendant involved in the argument did not continue her shift due to a staffing decision.

Happy ending for the family kicked off Spirit Airlines! Everyone got back on they kicked the flight attendant off instead 😋 pic.twitter.com/Te2G6W04GZ

​The response by Spirit Airlines referred customers to a website, outlining the airliner’s face covering policy, which stipulates:

“Guests who choose not to comply with our face covering requirement will lose future flight privileges with Spirit. Children under the age of 2 years old are exempt.”

The move did not satisfy angered commentators on social media, who flooded the airline’s Instagram account posts – even those unrelated to the incident - with vehement condemnation.

Spirit Airlines follows the federal law, which requires all travelers to wear face coverings in compliance with US Centers for Disease Control and Prevention (CDC) guidelines on flights and in airports.

The CDC recognizes that wearing masks may not be possible in every situation or for some people.

“Correct and consistent use of masks may be challenging for some children, such as children with certain disabilities, including cognitive, intellectual, developmental, sensory and behavioral disorders,” the agency has said in relation to the policy on stopping the spread of COVID-19 in children.