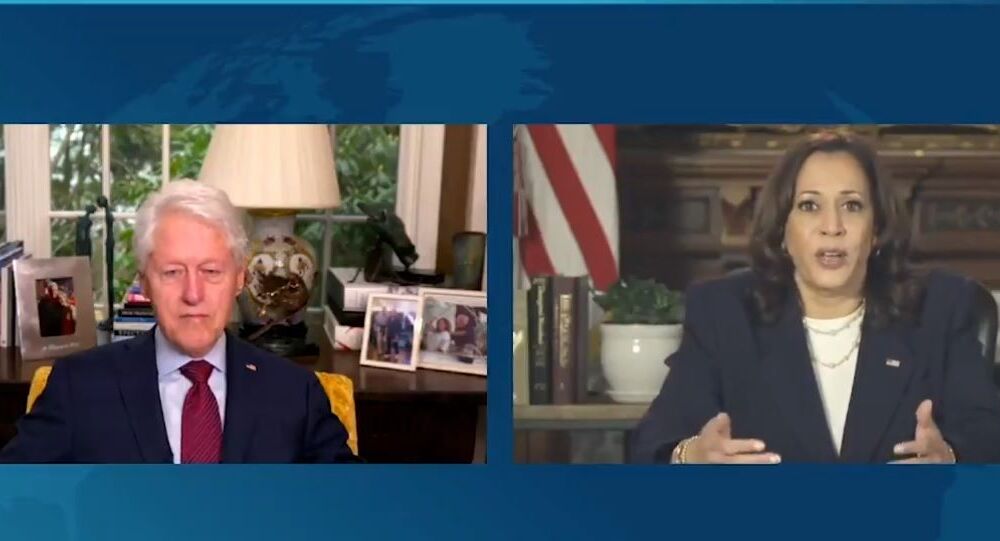 Former US President Bill Clinton was famously impeached in 1998 over lying about his relations with White House intern Monika Lewinsky, which he later admitted were “not appropriate”. But Clinton has denied rape and sexual misconduct accusations from a string of other women.

Vice President Kamala Harris’ decision to join America’s former commander-in-chief Bill Clinton for a discussion celebrating female empowerment was seen as a bad satire across the net, given the barrage of sexual assault and rape allegations against the 42nd US president.

​During the virtual event hosted by the Clinton Global Initiative on Friday, Harris and Clinton partly discussed how the COVID-19 pandemic impacted women and girls across the world - as well as cryptically touched upon how important it was to forgive oneself for past wrongdoings.

Hillary Clinton’s husband, who faced a stream of sexual misconduct claims throughout his presidency, seems to have endorsed Harris’ comments about being “present” at the moment and not in the past.

“It’s really good advice. Also, if you’re really present, it gives you the gift of memory as you pass through life,” Clinton said during the event, as quoted by the New York Post. “If you’re paying attention at each stage of your life, then you can build on it, you can grow.”

“And you can forgive yourself for your mistakes and keep looking for new answers,” the ex-president concluded.

When the conversation "on empowering women and girls" was announced this week, Juanita Broaddrick, one of Clinton’s accusers, who claims he raped her in a Little Rock hotel back in 1978 when he was the Arkansas Attorney General, slammed the event as a “f***ing joke”.

“This pervert ........ who raped me....is going to talk about empowering women....with a woman who spread her legs for power....” Broaddrick wrote on Twitter, commenting on the event.

Leslie Millwee, another woman who accuses Clinton of multiple sexual assaults in 1980s, said in an interview to the Daily Caller that it was difficult to imagine anyone less suited that the ex-president to speak about female empowerment.

Clinton denied these accusations, as well as other sexual assault and harassment claims from ex-White House volunteer aide Kathleen Willey and former Arkansas state employee Paula Jones, but the women stood by their accounts.

© AP Photo / SUSAN WALSH
First lady Hillary Rodham Clinton watches President Clinton pause as he thanks those Democratic members of the House of Representatives who voted against impeachment in this Dec. 19, 1998 file photo

American actress and Harvey Weinstein accuser Rose McGowan slammed Harris for teaming up with Clinton for the event, suggesting that the US vice president was devoid of both ethics and a soul:

“Ask him about being on an island of human trafficking victims 27 times,” McGowan wrote on Twitter, in reference to Jeffrey Epstein’s “paedophile island” which Clinton is alleged to have visited. “You are showing us exactly who you are."

This is obscene @KamalaHarris. You speaking with Bill Clinton about empowering women & girls is disgusting. Have you no soul? Have you no ethics? Ask him about being on an island of human trafficking victims 27 times. You are showing us exactly who you are. https://t.co/DQsbgxWhx4 pic.twitter.com/j3DhtixHtW

Virginia Roberts Giuffre, the woman who claims that she was sex trafficked by the disgraced financier for intimate relationships with British royal Prince Andrew, said that it was really “wrong” for Clinton to host an event on women empowerment over his purported links to Epstein.

But after the event took place on Friday, now re-branded as a discussion on "student leaders taking action", the flurry of comments slamming Clinton for hosting the talk and Harris for agreeing to be a part of it were only exacerbated.

Kamala Harris and Howard Univ decided that the best way to empower women is to celebrate Bill Clinton, a man no sane father would want in the same room as his daughter. https://t.co/0ozFDVwSgE

You would think that VP Harris could have found someone better than Bill Clinton to have a discussion with about 'empowering women and girls in the U.S. and around the world!

OMG! Vice President Kamala Harris could likely choose from just about anyone to headline a conference on “empowering women and girls” but she chose none other that world renowned Woman Empower(er)......... Bill Clinton!!!
Watch and RT my thoughts here! https://t.co/s20MktiJnS

​The news was taken by the public with a pinch of dark humour.

Another suggested that the event signified how apocalyptically sarcastic pieces from the Babylon Bee turned into reality.

When the Babylon Bee becomes reality.

What a disrespect to Women

I’m pretty sure Bill Clinton is one of the last men you would want to help celebrate Women’s History Month. How did the people who set this up actually think that was a good idea 😬

​Bill Clinton, who served as the US President from 1993 to 2001, was impeached by the House of Representatives in December 1998 for perjury and obstruction of justice in relation to his affair with White House intern Monica Lewinsky, who was 22 years old at the time. Clinton denied that he had engaged in sexual relations with Lewinsky, as he apparently did not perform any sexual acts with the woman himself, but admitted that he had acted inappropriately towards his staffer.