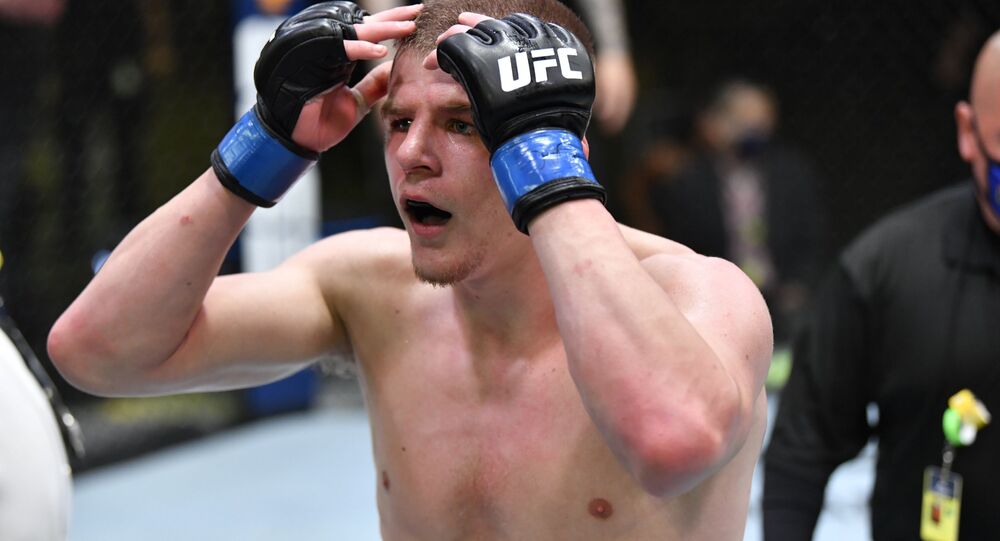 Dawson, 27, who started performing in the UFC in November 2018, has a record of 17 wins, 1 loss. The fighter, nicknamed KGD, mentioned Clay Guida as a potential future opponent, as he plans to compete in 2021.

The American mixed martial artist Grant Dawson knocked out Brazilian Leonardo Santos with a flurry of thunder-like punches with just a second remaining at UFC Vegas 22 on Saturday.

The fight was stopped at the 4:59 mark of Round 3 after Santos, 41, was put out by a total of five crushing punches in the face.

"At 4:59 of Round 3, Grant Dawson (@DawsonGrant20y1) earns a finish tied for the 2nd latest in 3-round UFC history. The record still belongs to Ricky Simon over Merab Dvalishvili at 5:00 R3," UFC tweeted.

Dawson's victorious strike at the very end of the round is the 2nd latest in the 3-round history of UFC, with the other such record holders being Leon Edwards and Paul Craig. At 5:00 R3, Ricky Simon still holds the absolute record of latest knock-out over Merab Dvalishvili.

With a second to spare!

⏱ @DawsonGrant20y1 refused to leave it in the judges' hands. #UFCVegas22 pic.twitter.com/Jasz14UHdl

Social media users greeted such an unexpected outcome of the bout with delight, with some also noting the ease with which Dawson carried out the series of punches.

Grant Dawson ends Leonardo Santos’ unbeaten UFC run with a KO with one second left in the fight. Santos’ first loss since May 2009. Insane. #UFCVegas22

Dawson seeing Santos wake up from his ko . #UFCVegas22 pic.twitter.com/wostssrnnk

​The UFC shared another video shot prior to Dawson's push to win, where the fighter's coach can be seen giving him some forthright parting words, saying "you can't take him down, you've got to try and knock him out."

WOWOWOW.. I am speechless. That ground and pound was incredible..#UFCVegas22

​Dawson's punches handed the first loss since May 2009 to Santos, ending his undefeated streak of 13 fights. Dawson, who joined the UFC after winning a contract at Dana White's Contender Series in 2017, is now undefeated in five fights.

‘It’s a Bitter Pill to Swallow’: Conor McGregor Reflects on His UFC 257 Loss