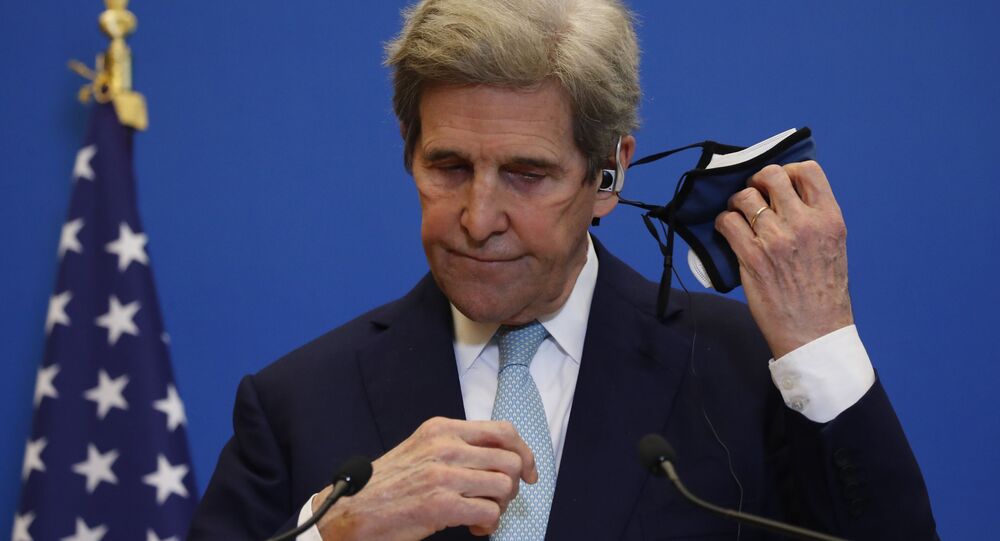 'This is Biden's America': Online Fury Over Photo of Maskless John Kerry on American Airlines Flight

On Wednesday, American Airlines stated that they are "reaching out" to John Kerry in order to underline that "all customers are expected to wear masks for the duration of their trip".

US Special Presidential Envoy for Climate John Kerry is under fire after a photo surfaced on the internet appearing to show the ex-Secretary of State without a face mask on during an American Airlines flight.

Kerry was quick to claim in a tweet on Wednesday that he had dropped his mask "to one ear on a flight" and "it was momentary", referring to "some St. Patrick's day 'malarkey' afoot on Twitter".

Feels like there’s some St. Patrick’s day “malarkey” afoot on Twitter. Let’s be clear: If I dropped my mask to one ear on a flight, it was momentary. I wear my mask because it saves lives and stops the spread. It's what the science tells us to do.

The claims followed American Airlines saying in a statement that they are "looking into" the alleged incident.

"The crew did not observe Secretary Kerry without a mask, and they were not alerted by other customers to a non-compliance issue. We continue to review the matter and we are reaching out to Secretary Kerry to underscore that all customers are expected to wear masks for the duration of their trip".

NOTE: His mask is off & he isn’t eating or drinking. Will he be fined for breaking the law & banned from flying @AmericanAir like regular citizens would be?#LiberalPrivilege pic.twitter.com/3j7j57jXVI

"His mask is off and he isn't eating or drinking. Will he be fined for breaking the law and banned from flying American Airlines like regular citizens would be?", the ex-POTUS' son tweeted.

He was echoed by an array of netizens who also expressed frustration over Kerry apparently dropping his mask, with one Twitter user describing Biden's climate tsar as a "habitual liar".

Stop lying, if you'd care it wouldn't happen. Can’t do anything with them excuses

Sir, you didn’t “drop your mask”. You deliberately broke protocol because you don’t believe the rules apply to you.

John Kerry gets to fly without wearing a face mask, but a four-year-old autistic child and his family are given the heave-ho. This is Biden's America.

I am deeply disappointed, sir, that you chose to not wear a mask on an airplane flight. You know better. Do better. Be a better

You dropped your mask all right.

"John Kerry gets to fly without wearing a face mask, but a four-year-old autistic child and his family are given the heave-ho. This is Biden's America", one more netizen wrote on their Twitter page.

Some, however, questioned the whole story, insisting that the picture shows a certain man rather than Kerry, and that "his mask is hanging from his ear". Several netizens were involved in guesswork wondering whether the US Special Presidential Envoy for Climate had already been vaccinated or not.

If you look closely, the mask is hanging off one ear. I imagine someone waited the whole flight for the moment it accidentally came loose.

He should be asked about it though. pic.twitter.com/ep8GiX2Oiz

Where the mask... was hanging off his ear?

Wait! His mask is hanging from his ear 👂. This photo seems like a set up. Like he took it off 1 ear to sip water, (detractor snaps quick photo) then he put it back on.
Republicans are quick to judge. Slow to listen.

Earlier this month, the US Centres for Disease Control and Prevention (CDC) released a new set of guidelines stipulating that fully vaccinated people can meet indoors without wearing masks or adhere to social distancing measures.