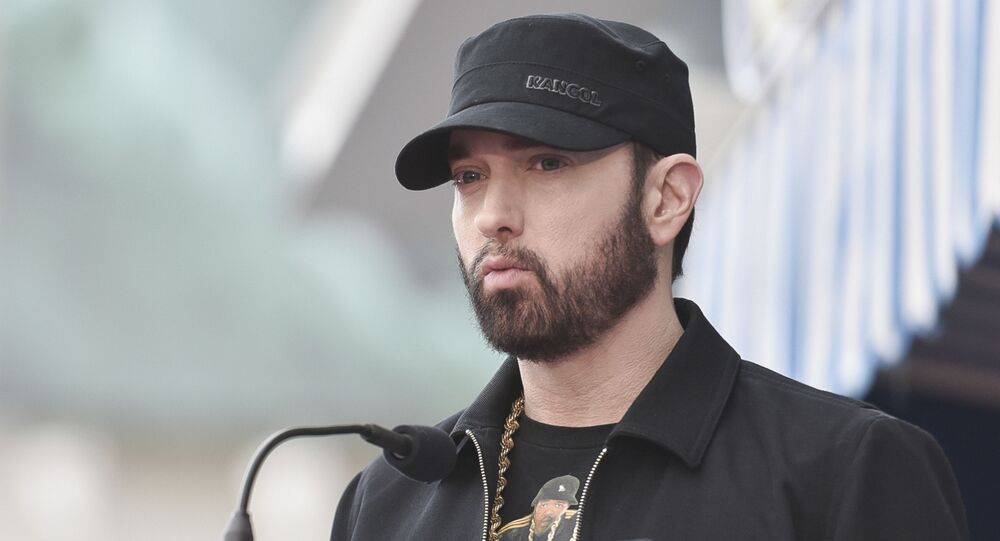 The singer, whose real name is Marshall Mathers III, is no stranger to causing public outrage with his behaviour and music. Last year, the rapper was criticised for mentioning the Manchester Arena terrorist attack, which left 22 people dead, in one of his songs.

Rapper Eminem has responded to an online campaign to cancel him with a music video for the song "Tone Deaf" in which he takes a dig at his opponents. The 45-year-old has recently become subject of harsh criticism after "Generation Z" users started arguing that his 2010 song with Rihanna "Love The Way You Lie" glorifies toxic relationships and domestic violence.

"If she ever tries to f***ing leave again/I'mma tie her to the bed and set this house on fire", reads one of the lines in the song.

One TikTok user wrote: "No wonder I’m toxic, I grew up listening to this song".

Although numerous people defended the singer, Eminem himself has remained silent until now.

“I won't stop even when my hair turns grey (I'm tone-deaf) / 'Cause they won't stop until they cancel me” #ToneDeaf lyric video up on my channel- https://t.co/kd4Iw5j9TI pic.twitter.com/nw1Q2eUyzN

​In the song, the artist seemingly blames his past wrongdoings on his alter-ego before saying that he is tone-deaf.

"I can't understand a word you say (I'm tone-deaf). I think this way I prefer to stay (I'm tone deaf)", the chorus goes.

Many social media users liked the video and praised Eminem’s response to attempts to cancel him.

This video is hilarious 😂

This is Rap God’s response to Gen z 😂

Love to see the middle finger up at the little crybaby’s pic.twitter.com/kHRgj74e64

​Others pointed to the numerous unsuccessful attempts to cancel the rapper and noted that "Love the Way You Lie" is harmless compared to his other songs.

Lol many have tried to cancel Eminem and failed. Dude went to win Grammys , movie that did very well and hits after hit lol

The *hilarious* part of this is that the song that sparked the backlash was "Love the Way You Lie" and not, like, "Kill You" or "Kim" or "Guilty Conscience."

​Still others made fun of Generation Z.

​Eminem is no stranger to causing public outrage. Over the course of his career, the rapper has been accused of homophobia and misogyny and faced multiple lawsuits, not to mention the countless feuds with celebrities like Mariah Carey, Michael Jackson, and Moby. He harshly criticised George W. Bush and Donald Trump, with his remarks being considered so offensive that the rapper was probed and interviewed by the US Secret Service.