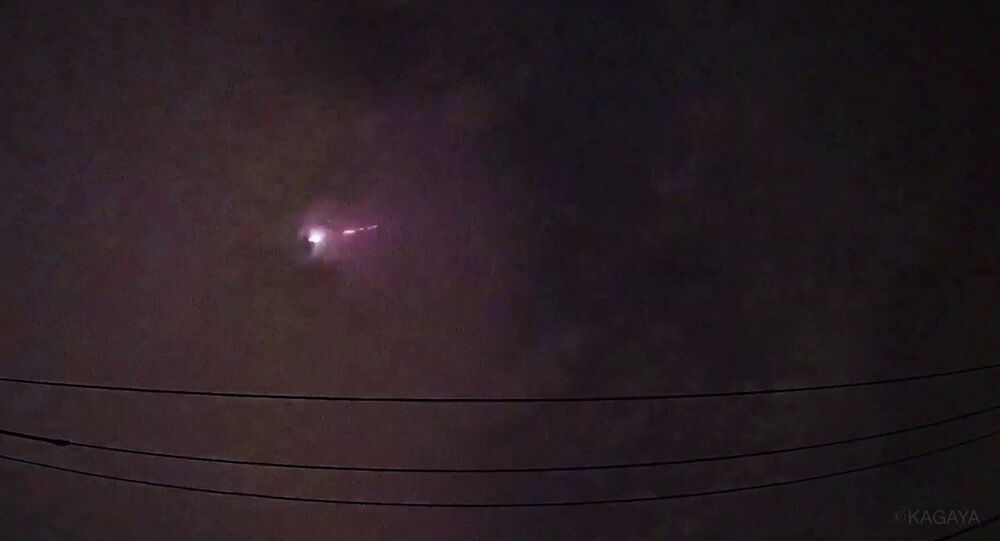 'Huge Flash Bursting Into Sparks': Stargazers in Meltdown Over Dazzling 'Fireball' in Skies Above UK

The UK Meteor Network, a group of amateur astronomers who has been using cameras to record meteor sightings across Britain since 2012, said the latest meteor above the country was a fireball, depicting it as "a slow moving meteor with clearly visible fragmentation".

A meteor lit up the skies over the UK on Sunday night, at around 9:55 p.m. local time, driving enthusiastic stargazers into a genuine frenzy.

The UK Meteor Network referred to the phenomenon as a "fireball", as it was captured on multiple cameras – both doorbell and dashboard ones - slowly gliding down to the ground, leaving behind what seemed to be parts of debris in the air.

The organisation says fireballs differ from conventional meteors that fall down to Earth's surface every day in the sense that they are often brighter and have a magnitude of -4, which is similar to Venus in terms of brightness. In comparison, the Sun is around -26.7, while the Moon is -12.6.

"From the two videos we saw it was a slow moving meteor with clearly visible fragmentation", the UK Meteor Network tweeted shortly after the event.

Around 120 sightings were reported from across the UK - as far north as Scotland and as far south as Somerset, in southwest England, with the stunned viewers posting their footage on social networks. Some even argued there was a distinct boom-like sound spreading in the neighbourhood.

"Anyone else see the #meteor burn up over the UK just before 10pm tonight? I first thought it was a bright star or plane, then it got bigger & faster, then a huge flash lit up the sky & it burst into a massive tail of orange sparks trailing behind like a giant firework! So cool!", one shared, while another, from Somerset, commented that it sounded like an explosion, accompanied by a "muffled thud" followed by heavy curtains over open patio doors "blowing inwards, albeit very gently".

Another viewer, from south London, went on to share, sounding way more concerned:

"I saw 2 flashes as I was doing the dishes in SW16 then a green liked [sic] streaked back and forth at my window. I thought someone was targeting me with a laser and I ran out of the kitchen and turned off the light. Terrified".