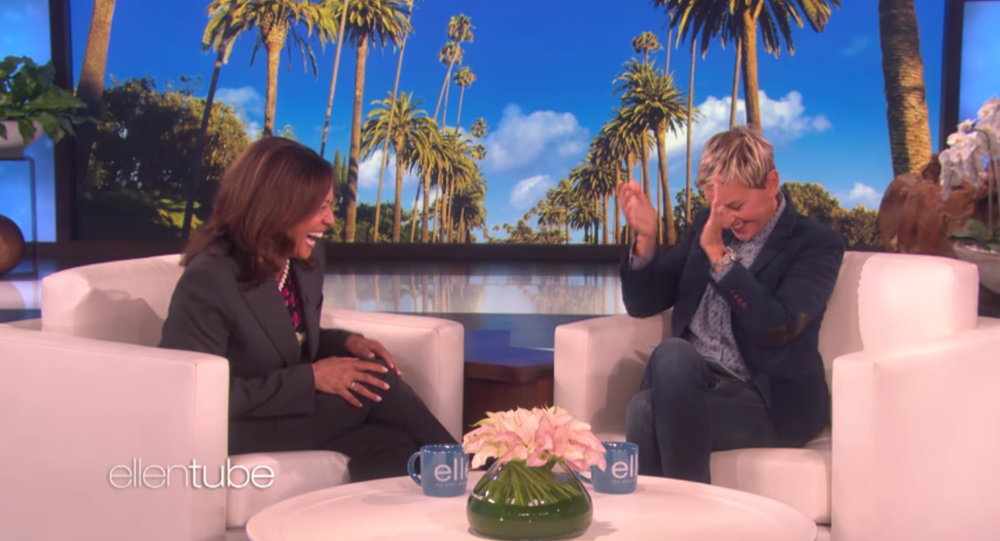 A second impeachment trial in the Senate has begun for the former US president, Donald Trump, who is accused of inciting the deadly 6 January riot at the US Capitol that killed five people. As a result, some pro-Trump figures have begun to search for ways to charge Democratic lawmakers as well.

With Trump's trial imminent, conservatives on Monday dug up a video of US Vice President Kamala Harris, claiming that she was joking about killing Trump, then-Vice President Mike Pence, and then-Attorney General Jeff Sessions.

A conservative commentator and author, Matt Margolis, tweeted the clip, saying: “Kamala Harris joked about killing Trump, Pence and Sessions with Ellen in 2018. Can we impeach her?” In order to do so, he went back to a tweet at the time the clip aired, by Washington Times columnist Tim Young.

​In the April 2018 interview with Ellen DeGeneres, then-Senator Harris (D-CA) was asked the sort of fluff questions typical of daytime talk shows, including her most rebellious teenage moment and her first celebrity crush (it was singer Tito Jackson). Then, the following exchange happened:

“If you had to be stuck in an elevator with either President Trump, Mike Pence, or Jeff Sessions, who would it be?” DeGeneres asked.

After looking a bit hopeless for a second, Harris replied: “does one of us have to come out alive?” prompting a shared cackle from the two women and the studio audience.

Kamala Harris joked about killing Trump, Pence and Sessions with Ellen in 2018.

The clip is hardly new ammunition for Trump supporters. Trump’s former campaign page account, the Trump War Room, posted and retweeted the clip four times during the campaign: first on August 13, 2020, right after Harris was nominated as the Democrats’ vice presidential candidate; then again on August 16, October 7, and October 27.

After Margolis refreshed memories, other conservative commentators such as alt-right ideologue Jack Posobiec and pro-Trump news outlet Newsmax picked it up again. It also prompted a “fact check” story by Newsweek.

Twitter users were generally amused by the clip and didn’t agree that she should be impeached, but suggested instead that it reflected poorly upon her.

Sounds impeachable to me

That is the laugh of a crazy

@KamalaHarris @vp This hypocritical BS from you and your colleagues are why millions of people are pissed off! Try and be better then how you have acted in the past! By the way, this impeachment crap isn’t sitting well either!

However, some folks, wise to the conflation, noted that the situation was not the same as Trump’s January 6 speech immediately prior to the deadly Capitol insurrection.

"Does one of us have to come out alive" =/= inciting a deadly coup attempt. In fact, she includes herself in the joke. "Us." I know it's difficult to understand humor. You'd have to be kind-of smart.

I guess if we all stormed the capital and killed five Americans after she incited us then Yes. But since that didn't happen NO.

​An impeachment motion has already been filed this legislative period against US President Joe Biden by censured lawmaker Rep. Marjorie Taylor Greene (R-GA). The controversial freshman representative introduced the charges to a Democrat-dominated Congress on Biden’s first day in office, accusing him of "abuse of power by allowing his son, Hunter Biden, to siphon off cash from America’s greatest enemies - Russia and China." Her motion has not won support.