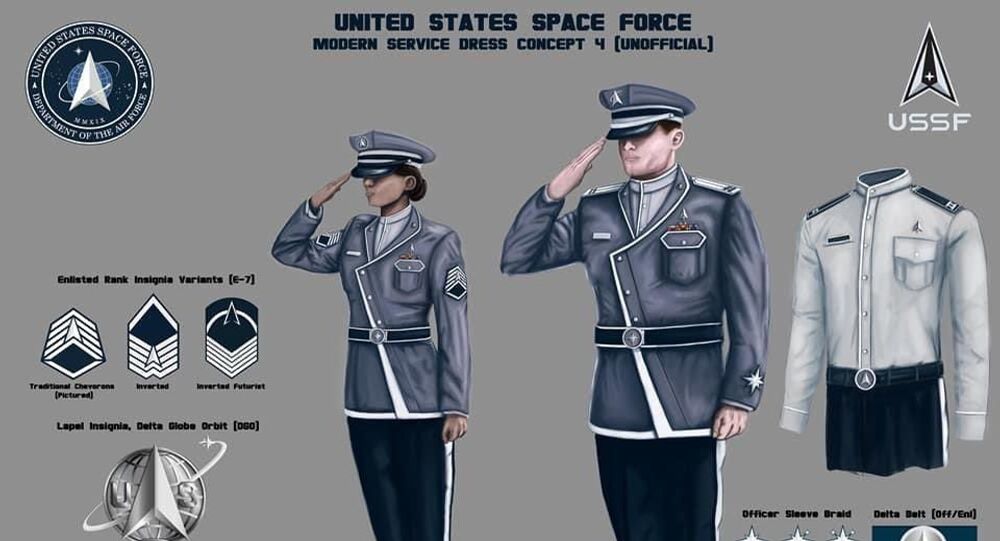 The United States Space Force announced earlier in December that "Guardians" would be the official name its service people will be known by, marking the anniversary of the establishment of the new US military branch. The name, however, has been widely mocked online due to its resemblance to space-related pop culture.

After "leaked" concept arts showing options for a possible US Space Force uniform went viral and prompted another wave of criticism toward the branch, a Guardian spokesperson refuted the authenticity of the images, outlining that the design of the Space Force uniform is still in process.

“The uniform graphic being shared on social media is not an official US Space Force uniform design concept,” Maj. Nick Mercurio told Military.com in a statement. “The Space Force service dress uniform is still in development.”

However, viral concepts have buzzed Twitter, with users instantly lashing out at the non-official uniform designs for their resemblance of Star Trek costumes or even Hugo Boss-made Nazi suits, even though it was confirmed that the arts have nothing in common with how the Guardians will actually look like.

The Space Force uniform concepts trending on social media are not official, but they are reminiscent of the real White House uniforms that were introduced during the Nixon administration. The Euro-inspired uniforms were dropped and sold to a high school marching band in Iowa. pic.twitter.com/1XUXM6DaV4

​Storming between calling the unofficial concepts a "rip-off" and "offensive", netizens have soundly mocked them.

Not only is the Space Force uniform, being touted as a Hugo Boss Nazi rip off, not real. It also doesn't look like a Nazi uniform. pic.twitter.com/VlTReOvih8

People are dunking on these new Space Force Uniforms concepts but I think the cross-marketing is smart and it's about damn time nachos made it on to official insignia.

Sure, the Space Force stole their logo from Star Trek, but surely they wouldn't steal uniform designs from a Star Trek movie...
Oh. pic.twitter.com/0joHTC6oeS

I am disappointed the proposed Space Force uniforms do not include clips in the belt for lightsabers.
I have no further public commentary at this time. pic.twitter.com/XyNnaCkJXz

​Some people rolled out their own suggestions for the uniform.

[P] Now *these* are some Space Force uniforms worthy of discussion: pic.twitter.com/M2v3ITbGYe

the United States Space Force uniform concepts are out and i whole-heartedly disagree with them so here’s a thread on what i wish they looked like. starting off, i think basic uniforms should look like this pic.twitter.com/OmbrBBW46D

A better design for US Space Force Uniforms instead of Hugo Boss: pic.twitter.com/TmcfrD7urW

​Several netizens noted that any design for a Space Force uniform is doomed to be slammed in social media.

Hot take: Literally any design for the Space Force uniforms would have been called ugly by Twitter.

​Ridicule and jokes evolved into a discussion of whether the US Space Force is useful or just a "vanity project".

"Seriously, enough of this Space Force nonsense. Yes, I know it's in the law. And the law can be changed. This was an idiotic Trump vanity project and if it's not stopped soon, we'll be stuck with people walking around in faux-Starfleet uniforms for decades to come", one user wrote.

Apparently, at this point the only thing the many sides could agree on was their loathing of the uniform concept arts.

"For the record, I completely support the Space Force and believe in the mission and need to protect US interests in space (satellites - communications, navigation, collections), but these uniforms are heinous", another user said. "This concept needs to go straight into the trash."

The youngest military branch in the United States, the US Space Force was established December 2019, and is currently in the process of developing its branding. Earlier in the month, Vice President Mike Pence announced that the name the soldiers of the branch would be "Guardians", something that caused backlash and debate on Twitter due to associations with Marvel's "Guardians of the Galaxy" and other elements of space-related pop culture.