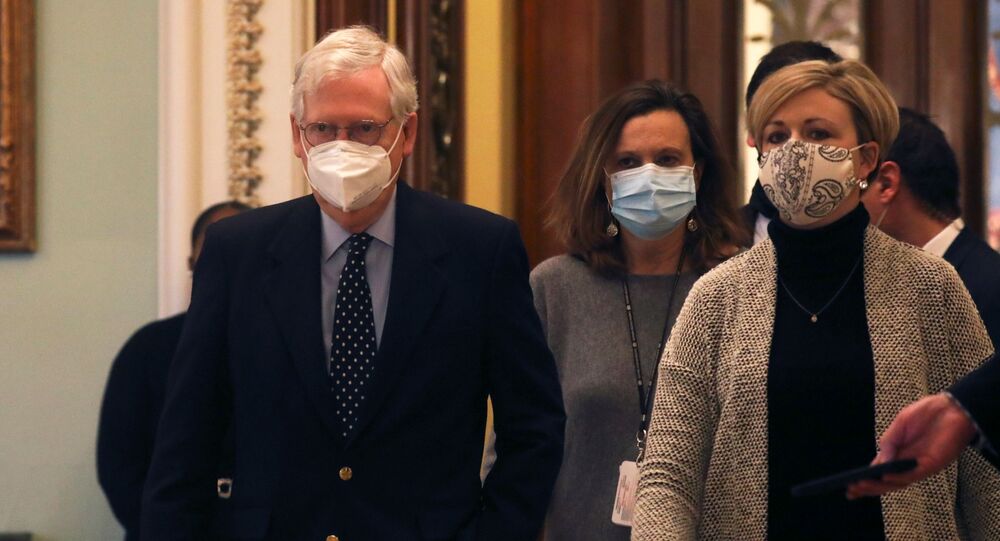 Earlier, Democratic Senate Minority Leader Chuck Schumer and Senator Bernie Sanders suggested a quick vote on the new coronavirus stimulus package, to expand the initial sum of $600 in direct payments to individuals to $2,000.

As Republican Senate Majority Leader Mitch McConnell moved to block the quick Senate vote on $2,000 direct coronavirus relief payments to individuals on Tuesday, netizens exploded with rage, urging the 78-year-old to "have a heart" and warning that his decision could see him become instead a minority leader.

By saying that the Senate would later address the issue of increasing direct payments to individuals, McConnell was reluctant to commit to putting the $2,000 checks, earlier approved by the House, to quick consideration. Instead, he brought to attention the elimination of Section 230 and election integrity.

The initiative to quickly pass the increased stimulus sum was put forward by the Dem Minority Leader Chuck Schumer, along with Senator Bernie Sanders, as the latter earlier pledged to delay the vote on overriding Trump's veto on the defense bill unless the $2,000 was approved.

McConnell's decision caused a wave of rage across Twitter, with hundreds of users propelling his name to world trends, along with hashtags "Kentucky", "Kentuckians", "#StimulusCheck" and "Senate".

We are coming to the close of one of the most tragic years in our history. The American people are hurting. They need help.

What exactly is the point of Mitch McConnell?

Mitch McConnell vs everbody in the whole USA

I think I hate Mitch McConnell more than I hate trump.

​McConnell's move was no surprise to many.

NOT BREAKING: Mitch McConnell once again puts his own self interests and desire for power above the needs of the American people. https://t.co/AzZlCGWumr

​For some, the Senate majority leader's decision appeared add clarity to the upcoming Georgia runoff election vote which will define the political majority in the US government for the next 2 years.

Thank you Mitch McConnell for making it explicitly clear that if Georgia votes in Ossoff and Warnock, we will all get $2,000 in 3 weeks, and if they do not then we will get nothing for the next six years.

hello just a reminder that if we elect @ossoff and @ReverendWarnock to the senate that we’ll get to see @KamalaHarris gaze over to Mitch McConnell like this as she makes tie-breaking votes on healthcare and voting rights pic.twitter.com/ePz5U0qsHZ

​Others quickly generated their outrage into memes.

​Earlier, a new coronavirus relief package was approved in the House with a 2/3 majority of the vote, as the president signed the $2.3 trillion COVID relief and government funding bill on Sunday, later tweeting to slam the $600 sum as "ridiculously low".

‘People Have Suffered Enough’: Trump Steps Up Pressure on Congress to Agree to $2,000 Relief Cheques