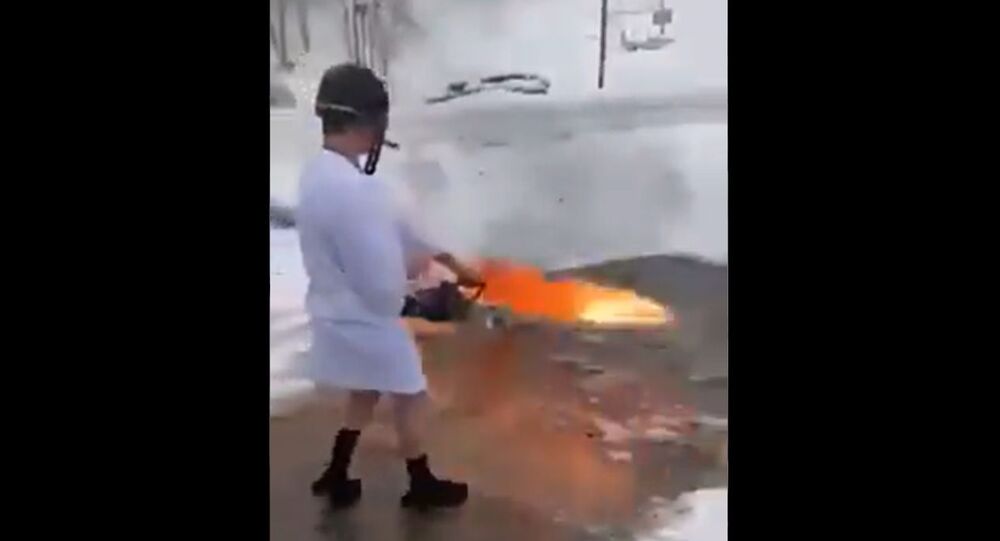 While most US streets are covered with snow, this Kentucky man decided to solve the problem of snowy roads with a little help of creativity. And a flamethrower.

The video, obtained by Reuters, shows Kentucky resident Timothy Browning using a flamethrower to melt the icy driveway near his house in Ashland. In the footage, Browning is wearing slippers, socks, a white bathrobe, and a hat – a look that resembles cousin Eddie from the holiday comedy film “National Lampoon’s Christmas Vacation”.

While wielding a flamethrower, the man can be seen chugging a beer and smoking a cigar.

“I thought it'd be funny for a video and wanted to clear off the under layer of ice on the driveway,” Browning told Reuters via Facebook.

KENTUCKY - That’s the way to do it with a beer, cigar and flamethrower. pic.twitter.com/2bEkN3Gtxo

Another video, taken from the house across the street, emerged on social media. “‘Merica,” its caption reads.

​The man triggered a lot of lulz on social media (no surprise), with many Twitter users noticing he looks like Cousin Eddie from "Christmas Vacation". Other users wondered how he managed to get a flamethrower, but someone responded Americans, except in California and Maryland, are "luckily" able to buy one, though the price can be rather expensive.

Thats not Cousin Eddie??😳
The black socks & robe are a nice addition to the flame thrower🤣🤣

Flamethrowers are legal in every state, except for California and Maryland. Some cost under $500.