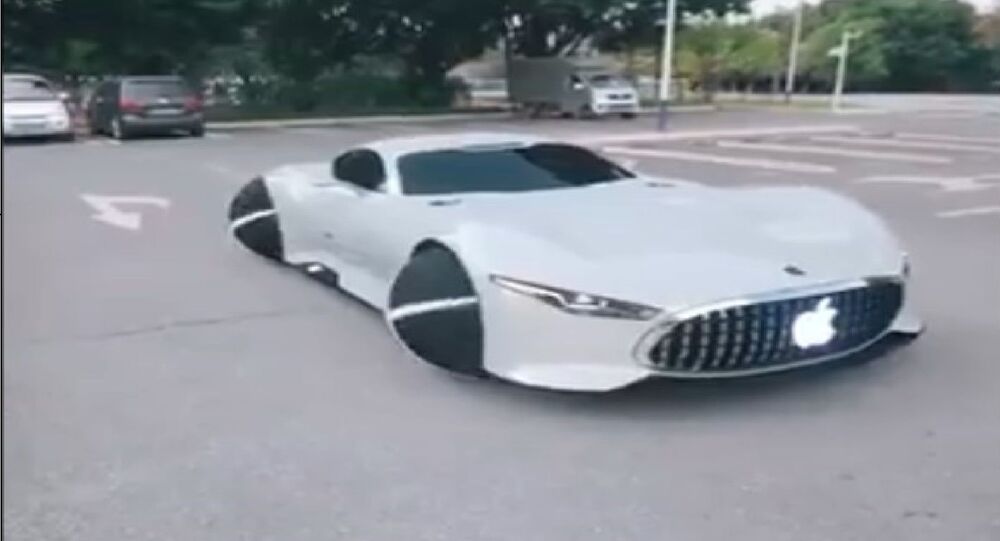 Rumours about Apple developing its own electric car, possibly with self-driving functionality, have been around since 2014. However, the company has never officially confirmed the reports.

Following recent reports about the ahead-of-schedule release of a car developed by Apple, presumably in 2021, a video has emerged on social media platforms appearing to show the concept of the planned vehicle. In the video, a car with unusual "spherical" wheels stops near a parking lot, the driver gets out, and then the vehicle makes a 90-degree turn on the spot and parks itself.

The problem, however, is that the video is actually a fake made with the use of the CGI technology, The Drive journal points out, stressing that the shadows do not match and claim the CGI seams are hidden by the clip's low-resolution quality. The online journal further noted that the car in the video is actually a 3D model of a Mercedes-Benz AMG Vision Gran Turismo, originally presented in 2013, with an Apple logo slapped on the grill and its wheels replaced with trackballs.

Despite the fact that the video is a fake, it has gathered over 55,000 likes and 21,000 retweets on Twitter alone, while gaining over 810,000 likes on a TikTok account under the handle Riovacci, where it emerged several days ago with the caption "Apple car concept".

Around the same time, Taiwan's Economic Daily News reported that Apple is planning to release its self-driving car in 2021, citing an anonymous source in the Cupertino company's suppliers. According to the media outlet, the release would come years earlier than initially planned.

"The key supply chain in Taiwan confirmed that Apple expects to release the Apple Car in September next year, at least two years earlier than the original plan. Its prototype has been tested on the roads in California, USA", Economic Daily News claimed.

'Tim Cook is Not an Innovator': Twitter Explodes as Elon Musk Says Apple Once Refused to Buy Tesla