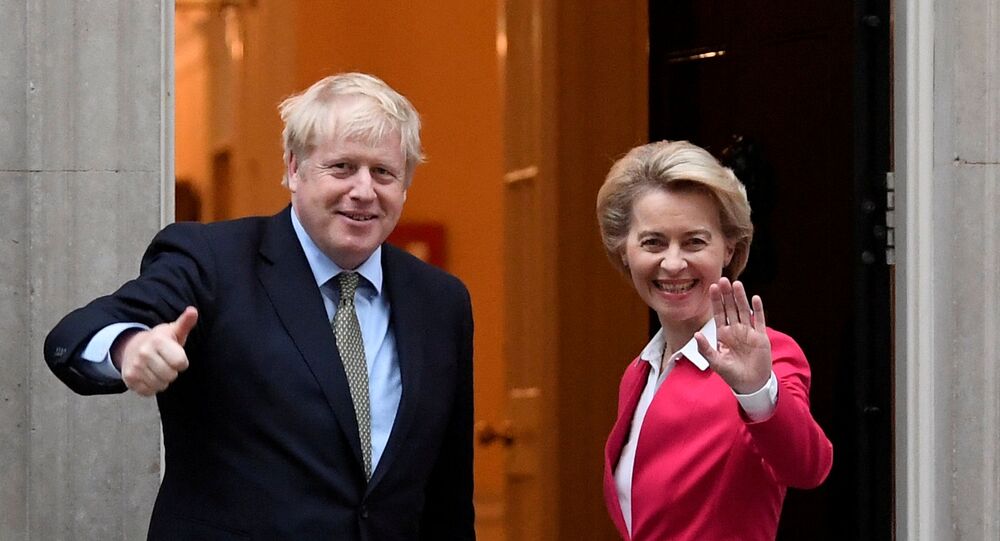 The discussion on fishing permission following the UK's withdrawal from the EU took an unexpected turn at the latest meeting between the British prime minister and the EU Commission president, leaving netizens laughing over the oddness of the situation.

As London and Brussels continue to struggle with reaching a post-Brexit trade agreement that would satisfy both sides' demands, UK Prime Minister Boris Johnson and President of the European Commission Ursula von der Leyen suddenly found one of the main issues in these discussions literally served on their plates.

When the two met in Brussels on 9 December to continue discussing the terms of the trade agreement, they were served possibly the most ironic dinner, consisting of scallops and turbot – key stumbling stones in the post-Brexit talks on British fishing waters and the EU's continued access to them.

There is hope that having tasted the seafood delicacies, the politicians would be motivated to find a compromise to avoid another round of the "scallop wars" that resulted in fierce sea confrontations between British and French fishermen in 2018. One thing is certain, though: the ironic dinner left many netizens watching the negotiation process laughing, as well as guessing who was to "blame" for the blunder.

Many twitterians suggested that those who were served and not the caterers were to blame for the oddly "topical" dinner.

Others couldn't help but resort to puns when describing their reaction to the last round of talks in Brussels.

Let's hope that the talks are turbot charged and that we find ourselves in a better plaice.

Superb trawling 🤣 by the EU

Some netizens, however, were left unimpressed by the bizarre correlation between the agenda and the dishes on the negotiating table.

Who cares what they ate!

Dont forget to inform us when they crap,its a very riveting update you shared, cant wait for next instalment