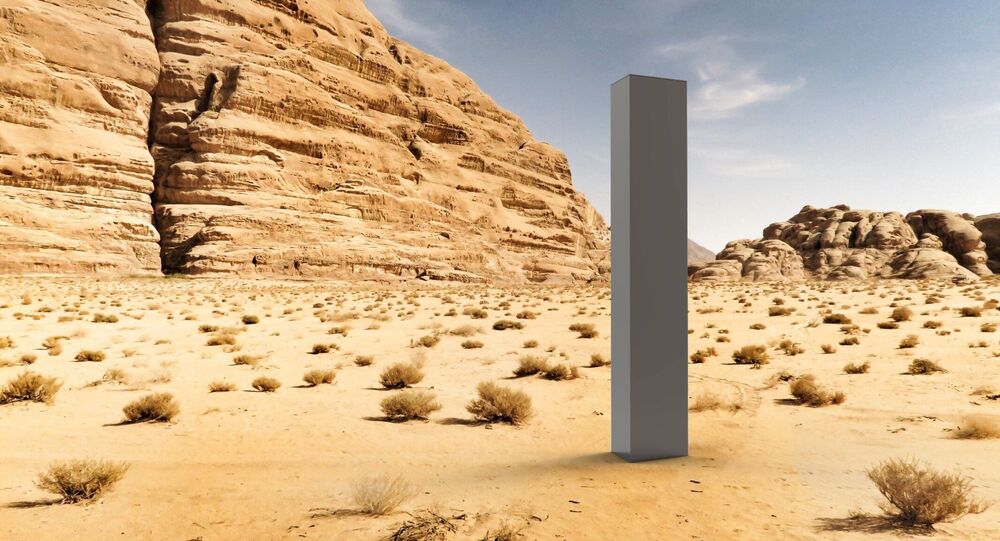 New Mexico-based art collective The Most Famous Artist has gathered attention through the use of sophisticated high-profile art stunts in the recent past, the most notable of which is the transformation of the famous LA "Hollywood" sign into "Hollyweed" on 2017 New Year's Eve.

The Most Famous Artist (TMFA), an arts community, has apparently claimed responsibility for the mysterious shiny metal obelisks in Utah and California, posting a series of photos and videos on its social media hinting that they were responsible for  placing them in nature, Mashable reported on Friday.

On its Instagram page, the group posted two photos, one of which shows the famous Utah monolith available for purchase and the other similar object wrapped in protective cellophane in a warehouse. Soon after, TMFA posted a third photo featuring a third recently-discovered monolith, that briefly stood atop of Pine Mountain in California.

Instagram followers have asked TMFA whether they created and placed the monoliths. TMFA vaguely replied, "if by you you mean us, yes". The group also added a section to their website called "Monoliths-as-a-service".

Mashable tweeted questions to group founder Matty Mo, receiving an answer that neither confirmed nor denied credit for the installation, while also not sharing any additional info, hinting that TMFA would unveil more details in the foreseeable future.

"I am not able to say much because of legalities of the original installation," Mo replied to Mashable's request for comment. "I can say we are well known for stunts of this nature and at this time we are offering authentic art objects through monoliths-as-a-service. I cannot issue additional images at this time but I can promise more on this in the coming days and weeks."

According to their website, TMFA is selling the monoliths it demonstrated online for the modest sum of $45,000 each, delivery included.

"We are experimenting with prints and toys too," Mo said, commenting on the offer with Fox News. "We will release those if customer demand exists."

When Mo was asked about the purpose of placing the monoliths in unexpected locations, he was polite but evasive.

"What better way to end this f---d up year than let the world briefly think aliens made contact only to be disappointed that it’s just The Most Famous Artist playing tricks again."

While the people interested in monoliths reminiscent of classic 20th century science fiction wait waiting for the promised 'additional proof", Mo published concept art and renders of the structure, dated August 2020, and looking almost the same as the three-sided pillars that went viral over the last couple of weeks.

Here is the render. #monolith pic.twitter.com/LGe8uFyac3

​The world discovered three triangular monoliths resembling those described in the 1968 sci-fi classic, 2001: A Space Odyssey, over the last two weeks, two located in the US and one placed on top of a mountain in northern Romania. All three obelisks disappeared soon after their discovery, with the third reportedly being replaced on Thursday night by a wooden cross at the hands of unknown men.