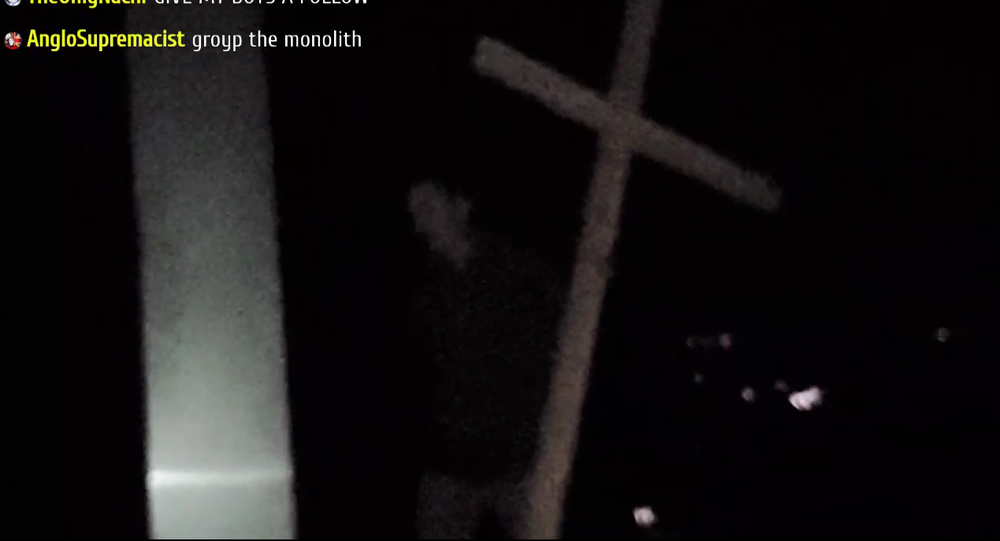 A second monolith in the US and the third in the world, in a weird recent row of 2001: A Space Odyssey-style shiny metal pillar discoveries, popped up Wednesday on top of a mountain in California, gathering immediate attention around the globe. Although, it did not have long to shine as a tourist attraction for the small town's mountain.

An unknown group overnight toppled a mysterious monolith miraculously found earlier on Wednesday on Pine Mountain near the city of Atascadero, California, replacing it with a wooden cross and shouting "Christ is King", the local newspaper reported Thursday.

The metal monolith structure, resembling that of the 1968 classic sci-fi Arthur C. Clarke book and subsequent movie, 2001: A Space Odyssey, did not stand for a day, as the triangular structure was removed almost as quickly as it was placed.

As seen in a 5-hour streaming video posted by a user CultureWarCriminal on blockchain streaming platform DLive in the early hours of Thursday, men drove to the obelisk's location near Atascadero, listening to music, including the Russian rock band Kino, Yugoslav Wars songs and US patriotic hymns and singing, while joking about their nefarious and clandestine purpose. Somewhere down the road they had apparently constructed a wooden cross, loading it inside their car.

NEW - Group chanting "Christ is King" toppled the new monolith atop Pine Mountain in Atascadero in California and replaced it with a wooden cross.pic.twitter.com/GQiH2dtDb9

Upon coming to the site, the men tore down the metal structure, as its foundation reportedly was not deeply buried. After swinging at the pillar they finally managed to topple it, and right before that one man addressed the camera.

"Christ is king in this country. We don't want illegal aliens from Mexico or outer space, so let's tear this bitch down", he said.

Celebrating their victory over the metal monument, the group placed a wooden cross near the hole where monolith once stood, stopping briefly to take the photos of their work.

Local authorities said they were unaware of the incident, and said they did not plan to investigate.

“The Monolith disappeared this morning. We did not remove it. There was rebar found in the ground, so we are planning to remove that as it’s a safety hazard. At this time, the City does not have any plans to investigate this further", the newspaper quotes the city's deputy manager, Terrie Banish.

The monolith was welded at its corners, and appeared to be made of stainless steel, being 10-feet tall (3 meters) and 18 inches (45 cm) wide.

The Monolith shiny metallic structure has now appeared mysteriously at the top of Atascadero's Pine Mountain (1300 foot) in California, after similar were spotted in Utah desert and Romania's mountainous Piatra Neamt region. pic.twitter.com/kM4Rcdm1r2