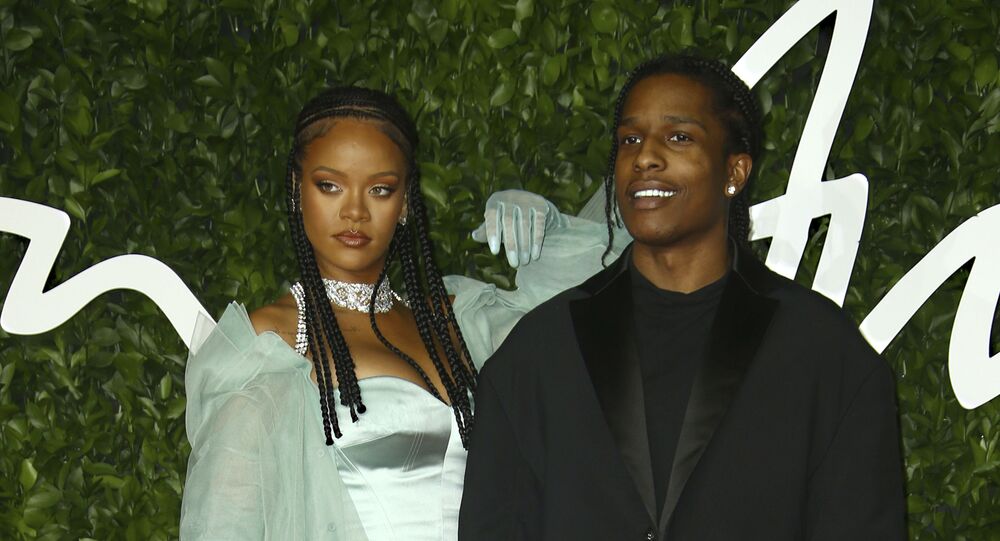 Riri and Rocky recently appeared in a two-part video series for Vogue and GQ, but it was the incessantly romantic clip Fashion Killa from 2013 that many of their subscribers and fans instantly recalled.

Singer Rihanna has started going out with rapper ASAP Rocky, People reported citing a source, drawing a line under loads of rumours and suppositions triggered by the duo's recent professional partnership.

© AP Photo / Joel C Ryan
Rihanna poses for photographers upon arrival at the premiere of the film 'Ocean's 8' in central London, Wednesday, June 13, 2018

The latter, as it turns out, must have grown into a genuine romance.

In July, the Barbadian-born singer and actress, who reportedly recently split up with her long-time boyfriend, Saudi entrepreneur Hassan Jameel, kickstarted her Fenty Skin campaign, which appeared to prominently feature Rocky.

As the pair embarked on a bit of a promo-tour for Rihanna's enterprise a month later, both of them featuring in video series for Vogue and GQ, fans already believed there was a certain chemistry between them on top of their work relationship.

The duo also famously starred in Rocky's Fashion Killa video back in 2013.

Yet, when rumours of the celebrities' romance first started swirling, a source for E! News struck back saying that they were just "hanging out".

"Rihanna is single. She just got out of a long, intense relationship with Hassan. She wants to be single and isn't going to jump into something", the source said. "She's hanging out with ASAP Rocky, but she is not dating him".

Things could easily have changed since then, and fans took to Twitter to post their thoughts. Few, incidentally, seemed to be surprised, rushing to wish them all the best and insisting they are meant for each other.

ASAP Rocky and Rihanna are dating. IVE BEEN WAITING ON THIS TO HAPPEN FROM THE FASHION KILLA VIDEO pic.twitter.com/xWamEmr284

I think ASAP Rocky and Rihanna are meant for each other

Some brought up another rapper, Drake, who Riri previously – quietly – dated, for at least three years, with the two coaxed into discussing their relationship after the breakup in 2018:

Drake adding Jaded Pt.2 to CLB after finding out Rihanna and ASAP Rocky are dating pic.twitter.com/JPNrHpAOn0

'Rihmocracy': Rihanna Says 'We'll Wait', as She Calls for Every Vote to Be Counted