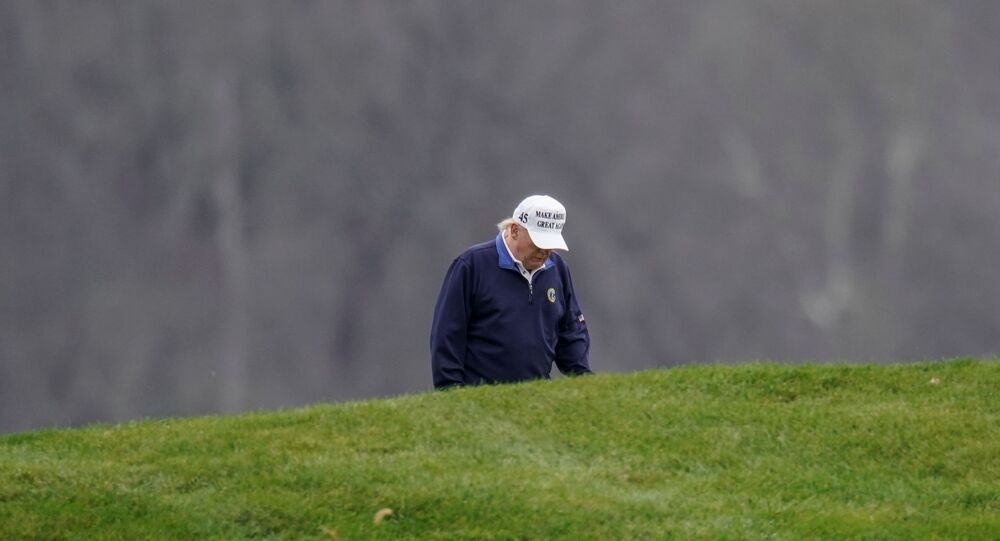 'I Hate This F***ing Hole!': Donald Trump Filmed Getting Emotional as He Plays Golf

America’s 45th President Donald Trump and First Lady Melania have traditionally spent their Thanksgiving at their Mar-a-Lago estate in Florida, but this year they have decided to celebrate the occasion at the White House. So far, POTUS has refused to concede November's election to his Democrat challenger Joe Biden.

Donald Trump spent Thanksgiving afternoon at his golf course in Sterling, Virginia, where he was caught on camera having a difficult encounter with one of the holes, according to footage shared by TMZ.

As POTUS sent one of the balls flying into the lake, something which he apparently hadn't intended, he was heard exclaiming “Oh s**t".

"I hate this f***ing hole!!!", the President then shouted, according to TMZ’s transcription, an outburst that was accompanied by a few laughs.

After the clip of the funny moment was shared online, netizens could not help joking about whether “the golf course was rigged” and suggesting the President demand “a recount".

But he’ll say it’s fraud and that he really got a hole in one...

Maybe the golf course was rigged. Demand a recount

Despite the laughs, the ongoing election uncertainty remains a serious concern in the US, with Trump taking to Twitter on Thursday to maintain that there was “no way” Joe Biden could have received 80 million votes.

“This was a 100% RIGGED ELECTION,” the President argued.

Biden has been proclaimed winner of the November election after winning 306 electoral college votes, according to preliminary results that are yet to be certified in a number of states. This has been denied by Trump who claims that the November vote has been won by him.

His campaign has now turned to Pennsylvania, a state which is rich in electoral votes, asking to stop certification of results until a “neutral judge” will listen to arguments and purported evidence of the election fraud. After a call, a Pennsylvania state court has ruled to put on hold "further action" on certification of the 2020 election results.

During a Thanksgiving press briefing, Trump admitted that it’s going to be “a very hard thing to concede because we know there was massive fraud.”

Trump still said he will “certainly concede” and vacate the White House on Inauguration Day if Biden is certified as winner by the Electoral College in December. He added, however, that this certification would be a “mistake".

According to the White House, the Trumps stayed on at the White House for the Thanksgiving dinner rather than escaping to their residence at Mar-a-Lago in Florida, as they have in previous years, to celebrate the holiday with their “immediate family".