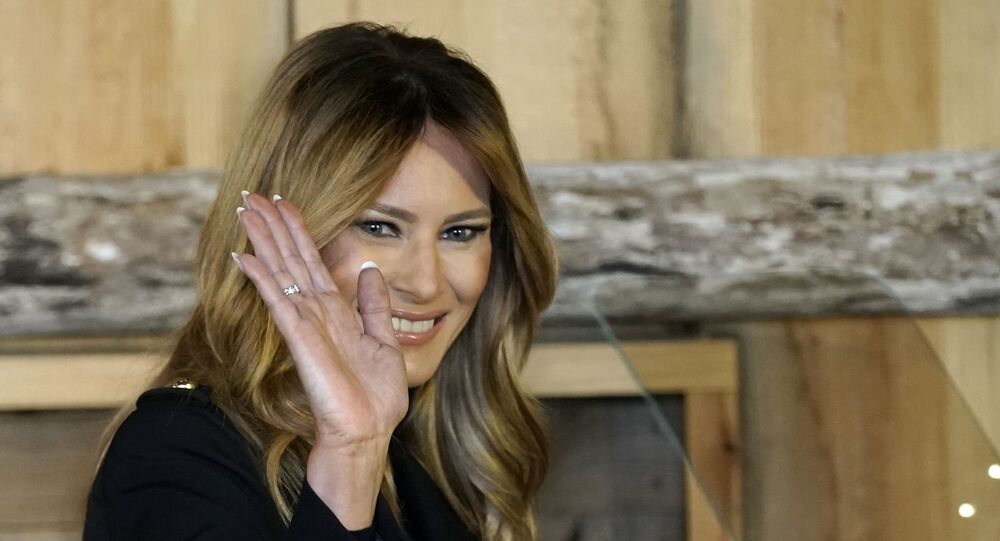 Mrs Trump has meticulously upheld the decades-long tradition of FLOTUS welcoming a Christmas tree to the White House premises in the run-up to the festive season, despite the coronavirus pandemic and hitherto lingering uncertainty about the 3 November election outcome.

The US first lady flaunted her apparently new blonde locks as she stood in front of the North Portico overseeing the delivery of the White House’s Christmas essential – an 18.5 foot Fraser fir tree grown in the neighbouring state of West Virginia.

A military band played a variety of Christmas-inspired songs as a maskless Melania smilingly observed the delivery of the lush tree, brought to 1600 Pennsylvania Avenue from a private farm yard.

Today I welcomed the arrival of the beautiful @WhiteHouse Christmas Tree! We are excited to begin decorating the People's House for the holiday season! #WHChristmas pic.twitter.com/8Qaq9sfiw9

The horse-drawn carriage that carried the major White House Christmas décor pulled up to the North Portico, for it to later be transferred for display in the Blue Room, where it will tower, all lit up with lights and adorned with decorations, in the coming days.
The Slovenian-born former model heartily greeted the carriage before posing for a set of pictures in her houndstooth-patterned cape and then dropping a “Merry Christmas” to the press that awaited her nearby.

Beautiful winter day at The White House with RSBN for the 2020 Christmas Tree presentation to @FLOTUS, Melania Trump. ✨🌲 pic.twitter.com/aMzqGDZIRi

The National Christmas Tree Association has provided the presidential fir tree since 1966 as a result of a competitive selection process, however this year, there was no such a selection event, as per the NCTA.

The solemn arrival of the tree is the first event on the list of the White House’s public and private festivities, and it came hours before President Trump finally allowed Joe Biden's transition to power – and to the White House grounds – to begin. On Monday night, POTUS okayed a move by the General Services Administration (GSA) to formally launch the presidential transition process.

The festivities in the major governmental building are expected to go ahead in a slightly scaled-back manner this time due to health concerns.

"The People's House will celebrate Christmas and Hanukkah while providing the safest environment possible", East Wing Chief of Staff Stephanie Grisham said in a statement.

On one of the upcoming occasions, ahead of Thanksgiving later this week, the incumbent president, who is still appealing the election results in a number of states, is due to partake in the joyful pardoning of turkeys ceremony.