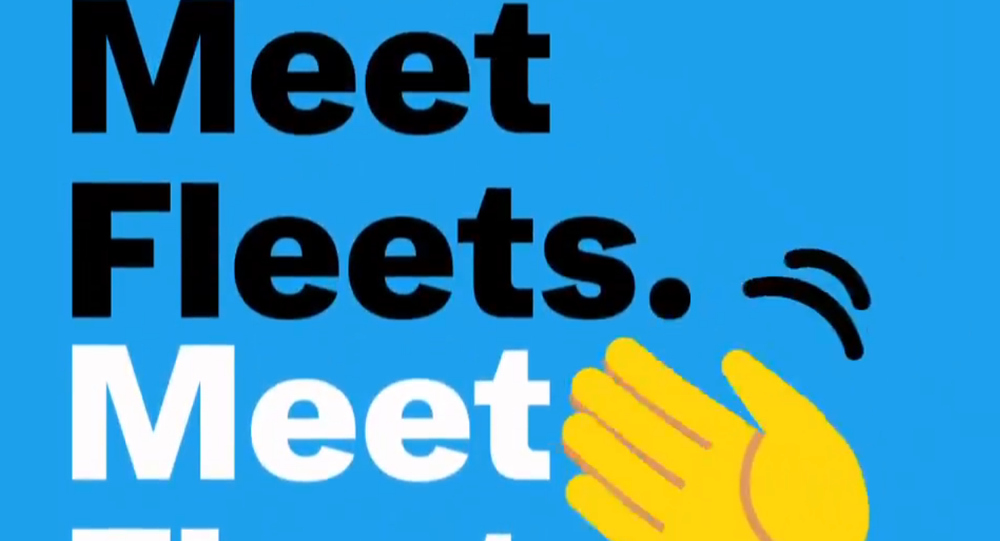 It was Snapchat that in 2013 first introduced the idea of temporary posts that disappear after 24 hours - with the trend later adopted by Instagram, Facebook, YouTube, LinkedIn and many other social media platforms.

On Tuesday, Twitter joined other platforms in incorporating the "stories" format, although the name of the posts appeared to have been changed to "fleets".

"That thing you didn’t Tweet but wanted to but didn’t but got so close but then were like nah. We have a place for that now—Fleets! Rolling out to everyone starting today", the social media platform tweeted.

Users were quick to share their opinion of the new feature. However, the ones who seemed to enjoy it appear to be drastically outnumbered by those frustrated with the update, slamming Twitter for copying features from other platforms while failing to deliver what users have been asking for.

Particularly, users requested an edit button - something that would allow changing the content of a tweet after it was posted.

What about the edit button? I would think that’s far more important than this crap!

​Some sensed a moment to pique Twitter about their labels of "disputed" content - something that is suggested by some users as an attempt to implement censorship.

That thing I "didn't Tweet but wanted to but didn't but got so close but then were like nah" was something I guessed you would censor, and maybe suspend me for saying, even though it was a perfectly sensible thing to say.

"Fleets" - thanks, but no. Scrap the censorship instead.

​Many lamented the similarity of social media now that Twitter had incorporated the 'fleets' observing that the format was initially invented by Snapchat and then copied by other platforms.

Fleets has entered the chat. pic.twitter.com/BQjAYos1hX

fleets just need music, then it’s over for instagram pic.twitter.com/5lMJ2rmly0

​Others were particularly triggered by the name 'fleets', wondering why would Twitter avoid calling it 'stories' and why 'fleets' was the naming choice.

Were the people who work at Twitter too young to know Fleets is an enema? pic.twitter.com/h0LAV6Gsa3

Time to go Fleet on my Flitter. I’m going to get so many Flitter Twollowers

​Stories was first launched by Snapchat in 2013, with Instagram and other social media platforms later introducing the feature. Content posted in stories will disappear in 24 hours and is displayed separately from the user's main feed.