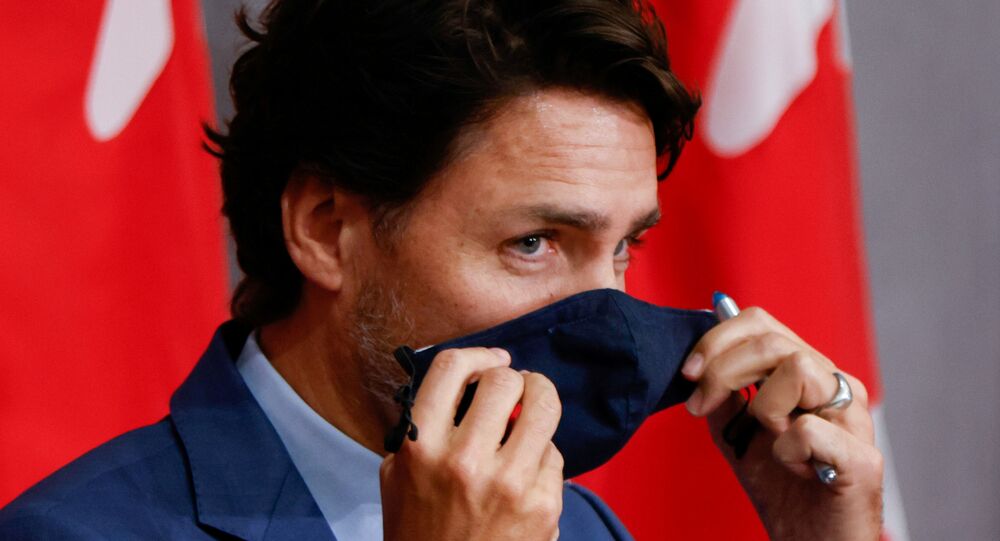 While the World Economic Forum's ambitious plan, dubbed 'The Great Reset', to reform business practices to be more sustainable is no secret, conspiracy theorists still saw it as a sign that a "shadow world government" or "cabal", purportedly attempting to manipulate the rest of the planet's population, exists.

A speech by Canadian Prime Minister Justin Trudeau in a September UN video conference has received a new spin after they were unearthed by online conspiracy theorists, who saw in it signs of a global conspiracy purportedly brewing right under the noses of clueless ordinary people. Trudeau argued in his statement that the COVID-19 pandemic gives humanity "an opportunity for a reset", or, to be specific, to redouble global efforts to combat extreme poverty, inequality and climate change.

Instead of an inspirational talk seemingly aimed at giving hope and meaning in troubled pandemic times, some netizens saw in his speech a link to a conspiracy theory called by some "The Great Reset", which suggests that 'global elites' are purportedly trying to redistribute world resources and unilaterally alter people's way of life, using the pandemic as an excuse.

Oddly enough, "The Great Reset", indeed exists, first suggested by the participants of the World Economic Forum (WEF), and has little to do with the conspiracy theory except for one thing – seeing the pandemic as a sign for long-needed change. But instead of changing all people's lives, the WEF's"Great Reset" aims at changing the way business is handled, to make it more fair, sustainable and less harmful for the planet's ecosystem.

Apparently, many netizens were either oblivious to the existence of such a plan, or simply did not trust that it could be true, suggesting instead that they are scared of seeing their worst conspiracy fears come true.

Me: *Warns about "The Great Reset" for years*

Politicians in 2020: "We have started The Great Reset"

The masses are always understanding the world far too late. It's a reoccurring problem.

The cover of @TIME: the #GreatReset is coming. Swallow the pill, folks, for your own good. The #Davos aristocracy at @wef wants the best for you & is so kind to reset your lives in 2021. No need for democratic consultation, which would but slow down the process of your salvation. pic.twitter.com/U5cPH0URwY

Ultimately, the Great Reset will result in two tiers or people: The technocratic elite, who have all the power and rule over all assets, and the rest of humanity, who have no power, no assets and no say-so in anything.

Some twitterians noted that the so-called global elites, purported to be behind plans of global transformation (and, apparently, world dominance), have become so bold that they no longer hide their "vicious" plans.

Trudeau is saying that the purpose of Coronavirus is for ‘The Great Reset’. The Cabal are coming out of hiding now 👀
pic.twitter.com/xcCEInn5y9

They’re not even hiding it anymore. Politicians like @JustinTrudeau want to use COVID-19 as their excuse to implement a radical, corrupt agenda that has nothing to do with the virus.

Several netizens saw the signs of a coming "new world order" in the speeches and phrases of other world leaders, such as "build back better".

"BUILD BACK BETTER" - This is the sign. Leaders Agreeing to a New World Order under the UN; the Great Reset by the World Economic Council - under communism. pic.twitter.com/WUnazQLUel

BE WARNED: “Build Back Better” is the slogan for The Great Reset, which is a globalist campaign to replace capitalism with socialism.

Anyone who repeats this slogan or endorsing The Great Reset is a 🏴‍☠️☭ globalist/socialist. ☭🏴‍☠️Call them out.

Not all social media users are duped by conspiracy theorists, however, although "The Great Reset" is trending on Twitter. Many netizens simply twisted their finger at a temple at their attempts to give Trudeau's words for the UN a new meaning.

Qa-morons and other conspiracy theorists be like "tHe gReAt rEsEt iS a nEw wOrLd oRdEr cOnsPiRaCy!"

No bitch, it's a plan to get our shit together once this pandemic is finally over.

They're not hiding their intentions here at all. There is also no room for conservative thought or ideas.

The Great Reset in an infographic: pic.twitter.com/m1XDuC8mlD