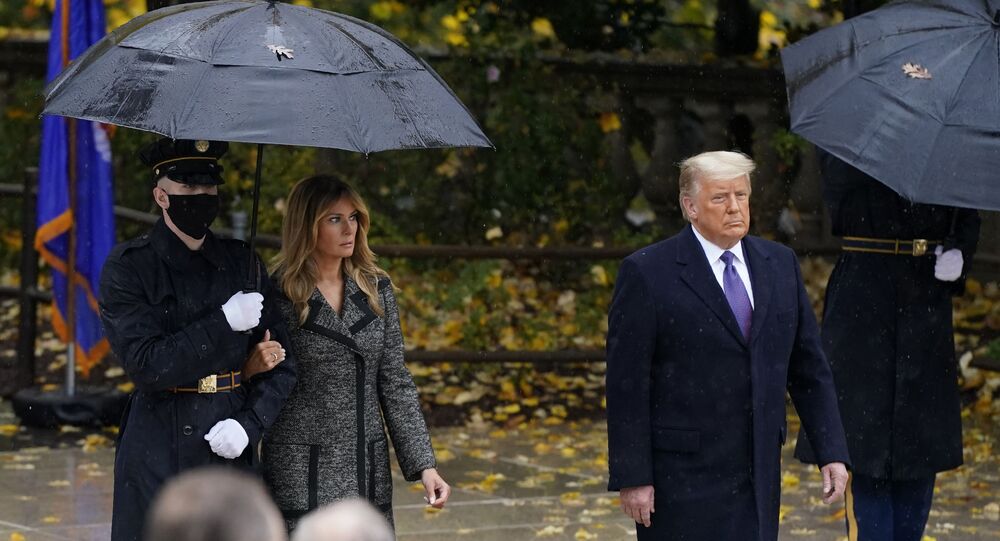 On Wednesday, President Trump made his first public appearance since Saturday, when US media outlets declared Joe Biden president-elect after adding Pennsylvania’s election votes in his favour, something that has been disputed by POTUS so far.

Melania Trump was spotted a few feet apart from her presidential husband on Wednesday during a wreath-laying ceremony devoted to Veterans' Day, as she walked through Arlington National Cemetery arm-in-arm with a soldier who was carrying a black umbrella to shield the First Lady.

The 74-year-old president was marching in front of his wife and her gallant escort, as he took to the stage next to vice-president Mike Pence.

Melania’s visible “distance” from her husband was noticed on Twitter, with users joking that it looked as though the First Lady was enjoying her company much more than she usually does when her husband is trying to hold her hand in public.

“I can’t believe it, finally a real man walking Melania out and actually sharing an umbrella WITH HER,” one person joked.

His wife accidentally walked next to him for a moment there...

The way Melania is looking at him, like she expects him to implode any moment!

Most of the netizens failed to notice, however, that the wives of other officials present at the ceremony, including Karen Pence, were also escorted by soldiers and remained seemingly apart from their spouses, which looked as though it was a ceremonial protocol.

Speculation over the Trumps' marriage has been in the air since the UK newspaper The Daily Mail published a report, citing ex-White House aide Omarosa Manigault Newman, which suggested that Melania Trump was “counting every minute” until her husband gets out of the office allegedly so that she could file for divorce.

“If Melania were to try to pull the ultimate humiliation and leave while he's in office, he would find a way to punish her”, the ex-staffer said.

She also called the marriage between Donald and Melania as “transactional”, claiming that the couple have separate bedrooms in the White House.

The First Lady's press office responded to the intimate report by saying that Melania was disappointed with Newman for “lashing out and retaliating in such a self-serving way, especially after all the opportunities given to her by the President".