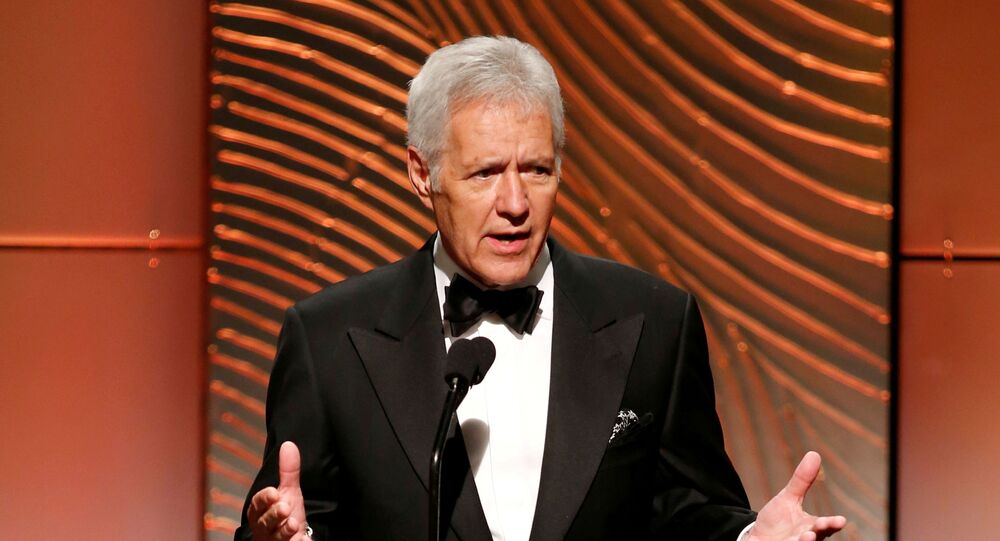 Alex Trebek was a host of the long-running American television game show "Jeopardy!", created in 1964, in which contestants are given general knowledge clues and have to deliver the answer in the form of their own question.

Many around the world, including prominent media and political figures, took to social media on Sunday to mourn the death of Alex Trebek - "Jeopardy" host and a TV icon.

Trebek, who entertained viewers for over three decades since the show was brought back in 1984, passed away at the age of 80, after a nearly two-year battle with pancreatic cancer.

The death of the iconic TV host saddened thousands of fans and many from the world of politics and media, including Canadian PM Justin Trudeau, actors Armie Hammer, Viola Davis and Ryan Reynolds, and many others.

Jeopardy! is saddened to share that Alex Trebek passed away peacefully at home early this morning, surrounded by family and friends. Thank you, Alex. pic.twitter.com/Yk2a90CHIM

We have lost an icon. Almost every night for more than three decades, Alex Trebek entertained and educated millions around the world, instilling in so many of us a love for trivia. My deepest condolences to his family, friends, and all who are mourning this tremendous loss. pic.twitter.com/XoobAfJwBv

Greatest host of one of the greatest shows of all time who passed away sadly after a long battle with cancer.

RIP Mr. Trebek. Thank you for always being there at the end of the day to take my mind off things.

Very sorry to hear the news about Alex Trebek. Condolences to his family. 😞

Alex Trebek was kind enough to film a cameo for our film Free Guy last year despite his battle. He was gracious and funny. In addition to being curious, stalwart, generous, reassuring and of course, Canadian. We love you, Alex. And always will.

RIP Alex Trebek. A true, true gentleman and courageous hero. May flights of angels sing thee to thy rest 💛 pic.twitter.com/autbyxnlcs

​Sony Pictures, the company that owns the "Jeopardy!" brand, honored Trebek's memory in a statement: "Today we lost a legend and a beloved member of the Sony Pictures family. For 37 amazing years, Alex Trebek was that comforting voice, that moment of escape and entertainment at the end of a long, hard day for millions of people around the world".

Many people expressed their condolences, recalling that they grew up to Trebek on the show.

A man who dedicated his career to fostering knowledge, curiosity, and the love of the game. - Who is Alex Trebek?

Thank you for the many years of discovery and learning. @Jeopardy #AlexTrebek pic.twitter.com/UODf34ohVK

For over 35 years, Alex Trebek made smarts and class the norm in our living rooms, every night, in a world that could always use more of both. That will be missed as much as the entertainment he never failed to deliver. In the now timeless words of @dhruv... pic.twitter.com/jtMAkZVsN5

I’m so saddened that Alex Trebek has passed. Growing up, he made me feel like my nerdiness was valuable and I loved learning from watching jeopardy. It was our family’s nightly pleasure. https://t.co/MQLfQz6Fa1

#AlexTrebek final day in studio for #jeopardy was on October 29th. Way to go out with your boots on. pic.twitter.com/BddjRyWkbJ

​Others honored the iconic TV host's memory with their favourite moments.

This was last night. After winning Final Jeopardy, Burt Thakur told Alex Trebek that he’s the reason he learned English. Alex inspired so many hearts, and filled our lives with so much kindness and warmth. He will continue to inspire future generations! RIP #AlexTrebek #jeopardy pic.twitter.com/pMJvWrNSuK

When a contestant made Alex Trebek choke up pic.twitter.com/Idhzq8xQN6

​The "Jeopardy!" quiz TV show sees contestants given general knowledge clues before being tasked to come up with their response in a form of question. The show premiered in 1964, was paused in 1975, and revived in 1984.