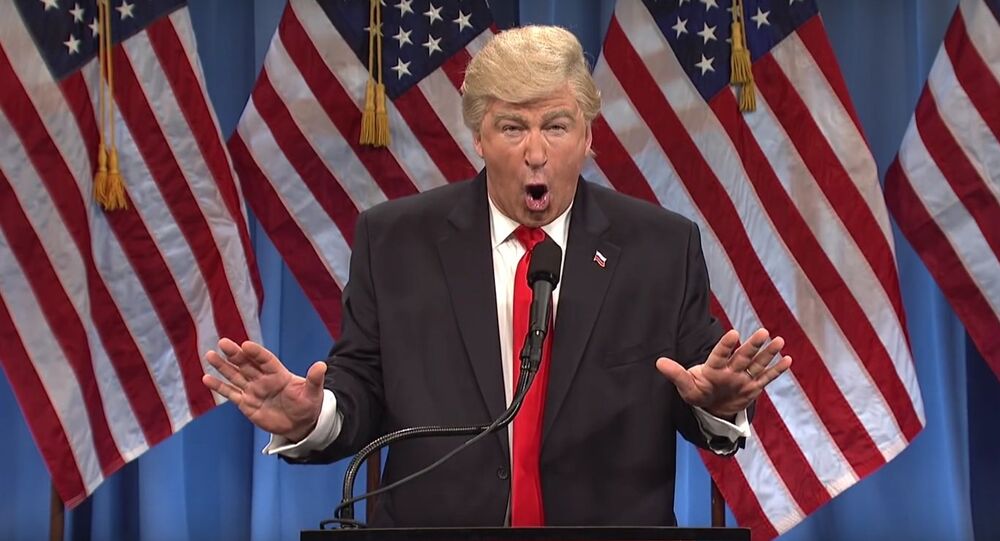 The late-night sketch comedy show has not overlooked any president or government official throughout its history. Over the past four years the show's writers have taken frequent jabs at Donald Trump and his administration, drawing harsh criticism from the Republican. Trump even threatened Saturday Night Live with investigation.

Netizens are divided after seeing the latest episode of Saturday Night Live dedicated to the presidential elections in the United States. The special was hosted by famous comedian Dave Chappelle. In his opening monologue he called Trump a "racist, hilarious son of a b***h" and criticised the Republican's handling of the coronavirus pandemic.

"We did it. Can you believe it? I honestly kind of can't", said Carrey impersonating Biden. "It's been so long since something good happened. … I've never felt so alive, which is ironic because I'm not that alive".

Carrey then poked Trump by reenacting the character of Ace Ventura.

"There are situations in life, and this is one of them, where there must be a winner and – a loser", the actor said.

Joe and Kamala have a message for Donald Trump. pic.twitter.com/ybrPtFAyQM

​After this sketch actor Alec Baldwin, who has portrayed Donald Trump since 2016, depicted what a potential concession speech by the Republican would look like, singing a somber rendition of "Macho Man" by the Village People, whose songs Donald Trump has played at his rallies.

Let's check in on the president's concession speech. pic.twitter.com/3If4UzQeXw

​Social media users were divided over the SNL special. Many users praised the show and its writers for the satire about Trump.

ABSOLUTELY HILARIOUS opening. I did so good to not watch any news or listen to radio to escape the drama. LOVED LOVED hearing it here.
Hooooray!! On announcement!!
🇺🇸🗽🌅 God Bless America!!

I agree. Right now that is the perfect level of satire to throw at Trump

​Some netizens noted they would miss Alec Baldwin's portrayal of Donald Trump.

​However, other social media users criticised the show for calling Biden president-elect before all the votes have been counted and emphasised allegations of voter fraud.

"No matter what the media tells you, this is NOT over. It’s not over until every LEGAL vote is counted. This is America. We the PEOPLE decide who our next President is. NOT the media", said Rep. Doug Collins (R-GA).

The election hasn’t been certified nor conceded. There are numerous accusations of fraud & lawsuits are being filed so we can look into why Republicans weren’t allowed to observe. Dead people requested ballots & voted. Computer glitches a plenty. Voting anomalies found in data.

​Netizens also hit out at SNL's purported bias and said the show wouldn't mock Joe Biden for the comments he's made over the years.

You guys will have a goldmine to make fun of with Biden. We can’t wait!! Oh that’s right your writers are all Democrats so he is off limits.

Biden has been in Government 47 years in that time he has accrued pages and pages of racist comments AND been accused of a serious sexual assault. . I suppose now he is canonised by the Media for the virtue of being not Trump it all goes down the memory hole.