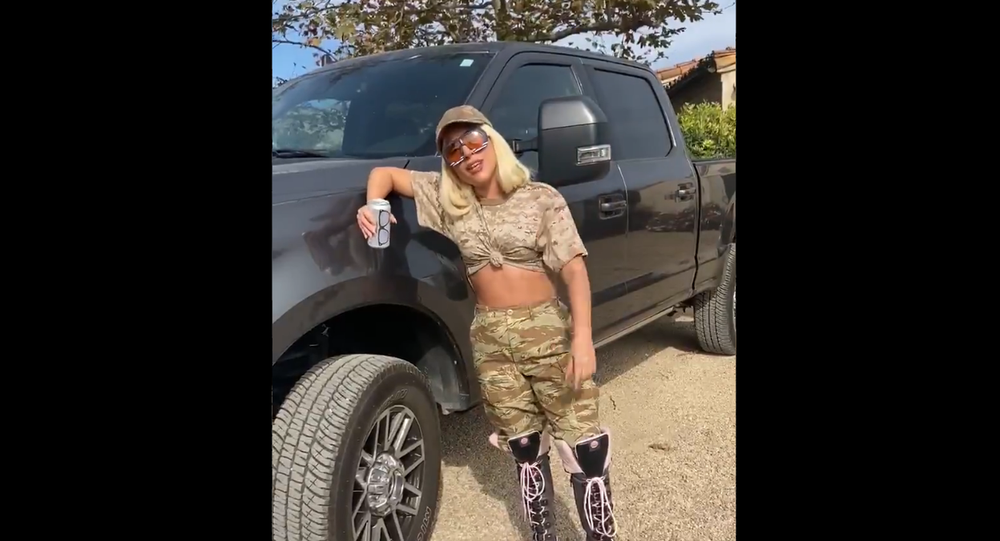 Earlier, Democratic presidential candidate Joe Biden announced that Lady Gaga was expected to join him at a rally in Pittsburgh, Pennsylvania, on Monday evening, one day before the US presidential election.

In a pro-Biden video posted days before the US presidential election, music star Lady Gaga, wearing a camouflage suit, leans against a pickup truck with a can of beer that she later crushes and throws to the ground, urging followers to vote and revealing that she will travel to Pennsylvania to support Joe Biden.

The video appeared on Gaga's Twitter account on Saturday, with the singer saying: "Hey, this is Lady Gaga, I’m voting for America, which means I’m voting for Joe Biden. And if you live in Minnesota, Pennsylvania, Georgia, Michigan, Florida or Arizona, I encourage you to vote. And if you have a friend who lives there, tell them to vote.”

​However, what was an apparent move to attract voters in "Minnesota, Pennsylvania, Georgia, Michigan, Florida or Arizona", resulted in online condemnation towards Gaga. Some Netizens saw her video as condescending, and slammed Hollywood for being "disconnected from reality" as they criticise celebrities attempting to appeal to their fans.

She’s wearing camouflage next to a big truck drinking beer in a sad attempt to relate with conservatives to steer their votes blue.

This just shows how disconnected Hollywood is from conservative culture. 🤦🏼‍♀️

This comes off fake and patronizing.

I just donated an additional 50 dollars to Trump's reelection campaign in honor of this video.

No one: OH LOOK SHE'S ONE OF US! pic.twitter.com/pzUKzsDT0p

What a waste of beer.

Oh, is that what people in these states are like? I’ll be interested to see what you do to pander to inner-city populations, too. PS-True Americans would never waste beer.

I just don’t get it. Who is this supposed to appeal to?
I just realized I have a confused scowl on my face while tweeting.

Wasting beer, mixing camo, the head roll, thinking that leaning against a truck will earn you cred? I won’t even go into the boots.

​The US presidential election will be held Tuesday, 3 November, while the final results are expected to be known later due to the high number of mail-in ballots. Democratic candidate Joe Biden and his Republican rival, incumbent US President Donald Trump, are taking part in the race for the Oval Office.